The fourth annual Big Strick Classic is quickly approaching, with players arriving in New York City by Thursday morning and anticipation throughout the Bronx reaching its apex.

Over the past three summers, Big Strick has gradually established itself as a must-see event on the high school circuit. The game has a track record of bringing out high-major talent to the mecca of hoops. The inaugural game in August 2011 featured the likes of Kyle Anderson, Archie Goodwin, Chris Walker and Shaq Goodwin. In 2012, it was Andrew and Aaron Harrison, Jordan Mickey and Troy Williams. And last summer, Kelly Oubre Jr, Isaiah Whitehead, Chris McCullough and Isaiah Briscoe stole the show at Gauchos Gym.

Pitting 13 of the top players from around the country (Team USA) against 13 from the tri-state area (Team NYC), the invitees will face off in a scrimmage Friday evening, and the main event—which features dunk and three-point competitions, in addition to the game—will take place Saturday afternoon.

As expected, this year’s event features an abundance of talent on both sides. There are several high-caliber guards and wings, who project to thrive in the game’s uptempo style, as well as some stretch-forwards who can space the floor and knock down perimeter shots.

If you’ll be around NYC on Saturday, we strongly recommend attending the Big Strick Classic. This is the spot to find players and jump on the bandwagon before they make waves nationally. The most recent example occurred last summer, when then-unknown Isaiah Briscoe led Team NYC to a 50-point fourth quarter and earned the nickname “Must See TV”. Now, Briscoe is fresh off a Peach Jam championship, and widely considered the best point guard in the Class of 2015.

The players compete at a high level, surrounded by a highly demanding, pressure-inducing crowd native to the inner city.

Stay tuned to SLAMonline for further coverage throughout the weekend. For now, below is a basic primer on a few players to look out for on Saturday. The number in parenthesis denotes that player’s current national ranking, via ESPN.

Bacon will give Malik Newman a run for the title of “best scorer in 2015.” The 6-6 swingman has a proven ability to convert difficult jump shots off the bounce, able to rise at a moment’s notice and use his size to shoot over the D. He’s an elite athlete in the open floor, equipped with the necessary body control to finish through traffic. I observed Bacon score a tournament-high 43 points last month at the Breakout Classic, and I expect a similar showing this weekend. It’s rare for a high schooler to consistently knock down mid-range and three-point jump shots. Bacon makes both look easy.

Brown is an attacking wing with the speed and athleticism to finalize plays above the rim, both in the half court and in transition. He has wide shoulders and a muscular frame to outmuscle opponents, yet is quick and bouncy to create separation from his defender. If Brown gets a step on his defender, it’s an automatic bucket. Brown is also a versatile defender, with the lateral quickness to stay in front of perimeter players, and the lower body strength to maintain his position in the post. He must continue to hone his jump shot, but Brown’s athletic gifts and attacking mentality are certainly there, and ultimately distinguish him from other players with a similar body frame.

Simmons is a combo-guard who can lead the fast break and make plays for his teammates, or run the wings and finish at the basket. He’s a smooth shooter off the bounce, using his height and length to see over defenders and rise up for a jumper. Defensively, he’s interchangeable in the backcourt due to his size, length and lateral quickness.

Bridges is lefty combo forward with impressive inside-outside ability for his age. He can finish through contact at the rim, using strength and explosiveness to bang with the bigs, but has also demonstrated a proven ability to knock down the three-pointer. Bridges is ahead of his peers offensively, making for terrific upside. It was no accident that he led Huntington Prep as a sophomore.

Chester is an electric point guard with a muscular build and NBA-level athleticism. He plays with a chip on his shoulder, and is an attacking guard by nature. The next step is to become more comfortable as a primary ball handler and learn how to operate as the game slows down.

With great size and length, the lefty is very advanced in his skill work, able to attack over both shoulders with his back to the basket. Zimmerman has a soft and polished touch, with a clear arsenal of counter-moves in the post. Last summer, he showcased that arsenal against more athletic defenders like Cheick Diallo and Chris McCullough, including up-and-unders, face-up jumpers and clever fakes. Zimmerman’s post game is already polished, and he will become even more coveted as his face-up jumper develops.

Sanders is an attacking point guard who plays running downhill and keeps his head on a swivel. He plays with a low center of gravity—almost like a running back navigating through the line of scrimmage—and uses his speed and athleticism to get into the lane and take off. Sanders’ first instinct is to penetrate, where he can finish at the cup, or dish to a teammate. Sanders is also a feisty defender, able to pick up his man at the point of attack and set the tone for his team. Overall, he’s an athletic two-way point guard who plays much bigger than his height. His athleticism and energy permeate throughout his team, making Sanders one of the most respected floor generals in the country.

The days of Jones flying under the radar are over. Instead, his athletic exploits have him flying above the rim and onto the national scene. The 6-7 lefty is an NBA-level athlete right now, with a lethal second jump and explosiveness that can be unleashed at any moment. Jones has terrific defensive potential, where his length, agility and athleticism make him a defensive stopper on the wing. He shows lateral quickness to keep his man in front of him, and has the length to disrupt passing lanes. Jones easily converts turnovers into transition buckets due to his athletic gifts. In the half court, though, Jones’ inconsistent jumper is holding him back. If he can catch-and-shoot from the wing with more consistency, Jones will become a triple threat player: shooting, transition and defense, with one of the highest ceilings in the class.

Alkins is an attacking guard with the ability penetrate the lane when he pleases. He has good body control at the basket, and always goes hard due to a “pit bull” mentality. Right now, Alkins is best at getting into the paint, where he can draw fouls and accumulate buckets.

Heron has the body of a running back, and he is always looking to attack the game. His strength and elite quickness allow him to penetrate the lane at will, where he can finish over the top due to terrific explosiveness. He is a good ball handler at the off-guard position, able to push the break and score in the open floor.

Unique is a great athlete with a legitimate 40-inch vertical at his diminutive size. He can get into the lane and create, though right now he’s more of a scorer than a distributor. He doesn’t really have a position right now, as he’s a scorer in point guard’s body, but his athletic gifts help him make an impact. McLean has shown significant improvement since last summer, in terms of his point guard skills and playing at a more controlled tempo. The junior’s upside remains high. 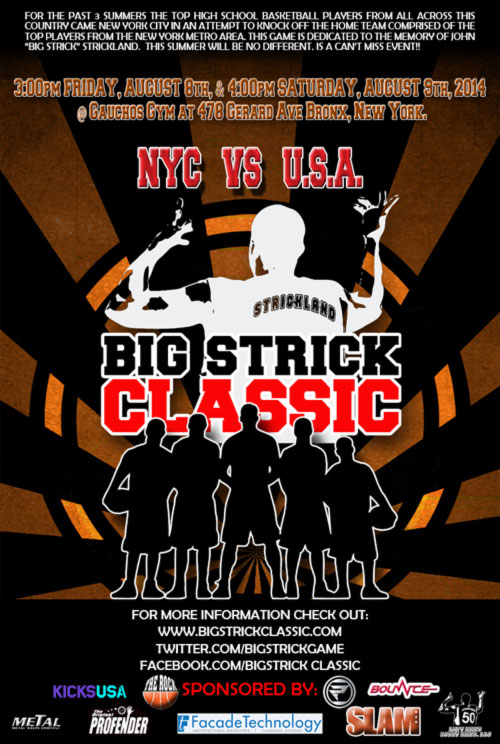