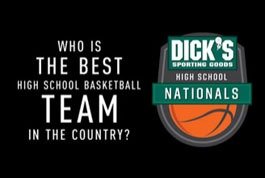 For the second consecutive year, the (unofficial) HS national champ will be crown at Madison Square Garden when eight of the top teams around the country converge in NYC during the first weekend of April. Two-time defending national champ Montverde Academy will be back looking for a three-peat, led by top-ranked forward Ben Simmons. Jaylen Brown, ranked right behind Simmons, will also be in attendance — as his Wheeler High (GA) squad earned a trip to the Big Apple after winning an appeal to the Georgia High School Association to allow them to compete in the tourney.

Full bracket info below via MaxPreps:

Seven of the top 12 teams in MaxPreps.com’s national Top 25 will participate in the event, which will be played April 2-4 at Christ the King High School in Middle Village, N.Y., and Madison Square Garden. All seven games will be broadcast across the ESPN family of networks.

The same two teams squared off in last year’s championship game as Montverde Academy emerged with an impressive 71-62 victory and a final national No. 1 ranking by some media outlets.

Here’s a look at the complete field and schedule followed by in-depth profiles for all eight participants:

Quarterfinals – Thursday, April 2 at Christ the King (All times Eastern)

And here’s the girl’s bracket via USA Today: