Some of the top hoopers in Cali ball out on the oceanfront. 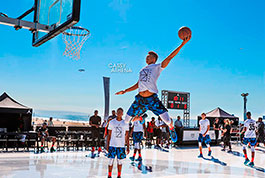 This past weekend, 40 of the top hoopers in Southern California took center stage during the 2nd annual Kings of SoCal Showcase at the Santa Monica Pier presented by Jordan Brand. As one of the last showcases before the high school season begins, the event, which divides teams into four regions—Los Angeles, Orange County, Inland Empire and The Valley—are where players from their respective regions show out on the court to see which area produces the best talent.

In the first game of the day, The Valley dominated LA, 123-78, and defending champions IE cruised pass the OC, 109-77. CP3 made a special appearance prior to the tip of the championship game between The Valley and IE, but the game would be called with 38 seconds left in the second quarter due to condensation on the court and for the players’ safety. IE held a six-point lead over The Valley, 52-46, unanimously making them back-to-back champions. Lonzo Ball (IE) and Remy Martin (The Valley) were both awarded with Co-MVP honors. SLAM was in the building checking out some of the West Coast’s top prep talent. Check out the list of top performers below.

From the tip, Heidegger orchestrated the offense, whether it was putting teammates in the right position to score or realizing the mismatch he had slicing through the defense for easy buckets. He also displayed stellar court vision and has a nice stroke from behind the arc. He carries a swagger and flare to his game that earned him “White Chocolate” and “Cookies & Cream” nicknames from the announcer, respectively.

It’s hard for defenders to be able to match Lee’s intensity and keep up with him due to the high motor he possesses. He’s very active on the boards and has guard-like skills in transition. Known for his freakish athleticism, Lee had a couple highlight-reel dunks for those in attendance to witness. He shoots it with the right and can knock down that 15-footer with ease, but he’s left-hand dominant when attacking the rim. His rim-to-rim running is superb that majority of his points alone just came from running the floor.

Lonzo is the quintessential point guard in the Class of 2016. His unselfishness is what makes him better than he already is. On the offensive end, he has eyes like a quarterback the way he surveys the court; and on the defensive end, he’s like a cornerback waiting for the offense to make a mistake which happens more than half of the time that leads layups on the other end. Teammates love to have someone like him on their team because they’re going to get the ball. At 6’5”, he blows past defenders for easy layups or stop-and-pops. And he can also shoot it from deep.

The four-star prospect is versatile and has a nice offensive feel for the game. He’s another big with a high motor that’s very active on the boards and is looking to gobble up every rebound in sight. He also establishes himself well in the post and handles the rock extremely well for someone his size. Can also extend anywhere from 15-18 to feet and knocks down the one-dribble pull-up consistently.

Only a freshman, Stanley is a name to remember as one of the nations top prospects in his class. Skillset wise, he’s surpassed those in his age group and the scary thing is that he’s only going to get better. Make sure your camera phones are out and recording when he hits the floor because he’s bound to have rim-rocking dunks whether he’s warming up in pre-game layup lines or in transition that will leave you in awe—just peep him emulating Zach LaVine below. Aside from the athleticism, Stanley’s length creates havoc on defense and he has a fluid jumper.

Martin proved his case why he was a Co-MVP favorite. He led The Valley’s second unit that matched the first units’ intensity increasing the lead when he was in the game. His head is always on a swivel in transition looking for open teammates to up his dime count. A lightning quick guard, Martin is on attack mode 24/7 and there’s nothing that’s stopping him from getting to the rim. He also finishes extremely well through contact.

The recent transfer to perennial powerhouse Mater Dei has magnificent court vision and is the type of player that makes the other four guys on the floor appreciate and trust someone like him with the ball in his hands. He reads defenses well and is excellent in pick-and-roll situations, whether he’s laying it up himself or threading the needle to the roller. He can also let if fly from 3-point land.

Son of former NBA player Michael Cage, Cage Jr. is another one of the top bigs West of the Mississippi River. A recent Oregon commit, the big man has soft hands and is good around the rim. For someone his size, he has a nice shooting touch although there’s room for improvement, but he’s able to extend out to the short corner and won’t hesitate to take that shot.

The unselfishness gene runs in the Ball family. On any given night, the middle brother of the three Ball’s can have 10 assists to coincide with his 20-plus-point stat line whenever he’s on the floor. LiAngelo likes to play in the post (preferably the left block) and uses his size advantage to outmuscle defenders for easy buckets. When he’s not bodying in the post, he drifting along the 3-point line where he’s dangerous once he starts knocking down a couple.

Ramsey is a straight bucket-getter. It doesn’t matter who you put in front of him, he’s going to score. He’s in attack mode until the clock shows zeros across the board and is looking to put defenders on his mixtape. His first step is insanley quick and he’s a wizard with the rock. He collapses defenses when he penetrates the lane allowing him to dish to open teammates or hit floaters over bigs protecting the rim.

Ball is another intriguing talent in the crop of 2019 players. Majority of the time he’s the smallest player on the court, but his game makes an enormous impact when he’s on the floor. Despite the age (14), Ball is playing amongst the best of them with a high IQ and an understanding of the game. His floater/runner is on that lock that skims over centers’ fingertips. A lot of his buckets come from stealing inbounds passes or poke from behinds that lead to transition layups or off-the-backboard alley-oops to teammates on the other end. And don’t sag off the youngest of the three Ball’s from the perimeter because he can shoot it.

Playing alongside Spencer Freedman on Sunday, Worku was the other offensive force for Team OC. He was aggressive whenever he had the ball in his hands. His main strength is his ability to shoot it from behind the arc. He also plays well off the ball putting him in the right spots on the court for drive-and-kicks.