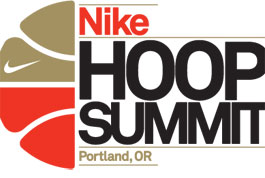 The 11-member World Select Team was announced [Wednesday] for the 2015 Nike Hoop Summit, the premier annual basketball game featuring many of the world’s leading basketball players age 19 years old or younger. The 18th annual Nike Hoop Summit will take place at the Moda Center, in Portland, Ore., on Saturday, April 11.

The annual game pits the World Select Team against the USA Basketball Junior National Select Team that is composed of elite American high school seniors.An incredible 165 Hoop Summit alumni have been drafted professionally. As of January 2015, 94 Hoop Summit alumni were active in the NBA, nearly one-quarter of the entire league.

The World Team has named three other guards on their 2015 roster – Federico Mussini (6’3”, Reggio Emilia and Italy), George de Paula (6’3”, Pinheiros and Brazil) and Stefan Peno (6’5”, FC Barcelona and Serbia).

Murray will look to make the same sort of impact in the 2015 game as he did last year. The guard, currently at Orangeville Prep in Ontario, followed his strong Hoop Summit performance with an even better showing in last summer’s U17 World Championships in Dubai, where he averaged 16.4 points, 4.6 rebounds and 2.9 assists for Canada.

Mussini plays for Reggio Emilia in Serie A, the highest level of professional basketball in his native Italy, where he is averaging 4.3 points in 17.2 minutes per game. He has been even more impressive in the prestigious Eurocup tournament, averaging 8.2 points over his 10 games. For Italy, Mussini enjoyed a stand-out U18 European Championships in Turkey last year, leading the tournament in scoring with 22.6 points per game and being named to the All-Tournament first team.

From Brazil, de Paula graduated from the junior to the senior team at the E.C. Pinheiros/Sky Sao Paulo club in Brazil’s NBB. He has also represented his national team at U17 and U18 levels, playing in last summer’s U18 FIBA Americas Championships in Colorado Springs.

Peno, a member of the Serbia U17 team that won bronze at last summer’s World Championships in Dubai, plays for the prestigious European powerhouse FC Barcelona in Spain’s ACB league. Most of his time this season has been spent with FC Barcelona II, the feeder club of FC Barcelona, but he made his debut for the full senior team in a victory over CAI Zaragoza in December.

Buza, a forward, played for the full senior Bosnia and Herzegovina national team in 2014, making three appearances against Great Britain and Iceland as his country won their group and qualified for Eurobasket 2015. Buza, who plays his club basketball for OKK Spars Sarajevo, also found time last summer to lead his country to the gold medal in the European Championships U20 Division B tournament.

A forward from Australia, Simmons is currently at Montverde Academy High School in Florida and has committed to play for LSU in the NCAA from 2015-16. He was part of the Australian team that won silver at the U17 World Championships in Lithuania in 2012 and has also played in his homeland for the Bulleen Boomers in the Big V state league. He is currently ranked the number one high school recruit in the United States by ESPN.

Diallo is another World Team player at high school in the United States, playing at Our Savior New America HS in New York. From Mali, he played for his country at the U16 African Championships in Egypt in 2011 and came to the US two years later, appearing in the Jordan Brand Classic international game in that year.

At the center position, Wynyard is from Rangitoto College in Auckland but has committed to play in the NCAA in 2015-16 for Kentucky. He played in the New Zealand NBL for the Super City Rangers in 2014 before signing for the New Zealand Breakers, who play in Australia’s NBL, where he has mostly seen time with their junior team.

Like Wynyard, Labissiere has committed to Kentucky and is currently ranked the No. 3 high school recruit in the United States by ESPN. After moving to the U.S. from his native Haiti in 2010, he located in Memphis, Tennessee and is currently playing at the RYD Prep School.

Also at the forward position, Maker is a high school teammate of Murray’s at Orangeville Prep in Ontario. Originally from South Sudan, Maker is now an Australian national and considered an exciting and raw talent, having come to the sport only recently.

Finally, China’s Zhou plays for Xinjiang Flying Tigers in the CBA and is averaging 14.1 points, 7 rebounds and 3.3 blocks in 31 games for his club this season. At the international level, he was a member of the China team that won gold at the 2014 Asian U18 Championships, where he averaged 13.1 points, 6.9 rebounds and led the tournament in blocks, with 2.7.