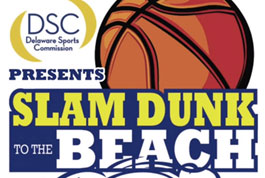 After making its return last year following a 10-year hiatus, the Slam Dunk to the Beach national showcase will once return this holiday season with a long list of nationally ranked HS programs as well as blue chip recruits. Below is the official press announcement from the event organizers:

The Delaware Sports Commission has announced the national slate of high school teams that will participate in the Slam Dunk to the Beach basketball tournament, which will be held at Cape Henlopen High School from December 27-29, 2015. The field is headlined by several schools who finished the 2014-15 season ranked in the USA Today Top 50 rankings. Roman Catholic (Philadelphia, PA) finished as the 16th ranked team in the country, while Roselle Catholic (Roselle, NJ) and Ss. Neumann-Goretti (Philadelphia, PA) each cracked the USA Today Super 25 at 20th and 22nd, respectively. La Lumiere (La Porte, IN), Christ the King (Middle Village, NY) and St. Benedict’s Prep (Newark, NJ) also finished the year amongst the top 50 teams in the country.

Eighteen teams—representing seven states and the District of Columbia—have now been announced to compete in this year’s event, with a nineteenth and final team to be announced at a later date. This collection of elite teams will be three more than last season’s Slam Dunk to the Beach total. Slam Dunk is returning to the Delaware beaches after a successful 2014 relaunch of the iconic tournament that over the years has hosted some of the nation’s premier players, including LeBron James (2001), Kevin Durant (2003), Dwight Howard (2003) and Carmelo Anthony (2000), all now NBA superstars. Slam Dunk to the Beach contributed more than $1 million to the local economy and well over 10,000 visitors watched the exciting action unfold over three days in December 2014.

“Slam Dunk to the Beach is a well run event that garners respect nationally,” said St. Benedict’s Head Coach, Mark Taylor, who has led the Gray Bees to several USA Today Top Five finishes. “St. Benedict’s is honored to be included. Our roster has players from NJ, Philadelphia, Delaware and Baltimore, so this is an opportunity to not only compete against elite players and nationally recognized teams from all over the country, but to play in front of family, friends and home. I am sure our players will come to play and have a great experience.”

The 2015 event will once again feature numerous ESPN top rated players from each graduating class. V.J. King (Paul VI/Fairfax, VA), James Banks (La Lumiere/La Porte, IN) and Tony Carr (Roman Catholic/Philadelphia, PA) are all listed on the ESPN100 rankings for high school seniors. Representing the ESPN60 list for the Class of 2017 will be Mohammed Bamba (Westtown/Westtown, PA), Brian Bowen (La Lumiere/La Porte, IN) and Quade Green (Ss. Neumann-Goretti/Philadelphia, PA). Nazreon Reid (Roselle Catholic/Roselle, NJ) and Cameron Reddish (Westtown/Westtown, PA) round out the list with their ranking in the exclusive ESPN25 for the sophomore class.

“We are very excited about the caliber of teams that will be participating in this year’s event. It truly is a who’s who of high school basketball in the United States,” said Slam Dunk to the Beach Chairman, Dr. Matthew Robinson. “Feedback from teams, college coaches and fans that were in attendance at last year’s event has been overwhelmingly positive. They really enjoyed their trip to the Delaware beaches while taking part in a first class basketball tournament.”