The pre-draft showcase returns for a 14th year. 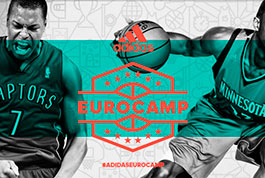 Dates for the 14th annual adidas EUROCAMP were announced today by the three-stripes brand. The pre-draft showcase, which features the top international prospects, will be returning to Treviso, Italy once again on June 10-12.

More info below from adidas:

adidas today announced dates for the fourteenth annual adidas EUROCAMP that will showcase the best international players in the only NBA sanctioned pre-draft camp outside of the United States. Held in Treviso, Italy, June 10-12, the three day camp brings the best international talent together with former and current NBA coaches and players.

Teams participating this year include the under-18 adidas USA Select and the France under-20 men’s national teams. The full roster for adidas EUROCAMP 2016 will be announced in May. Coaching director Bill Bayno will return with an elite coaching staff that includes veteran assistant coaches Kenny Atkinson (Atlanta Hawks), Nick Nurse (Toronto Raptors) and Mike Longabardi (Cleveland Cavaliers). Maurizio Gherardini, the founder of adidas EUROCAMP and Fenerbahce Istanbul general manager, returns as the camp director.

adidas EUROCAMP will be held at La Ghirada Sports Complex in Treviso, Italy.