The Kentucky Derby Festival Basketball Classic is one of the nation’s more unique all-star games. Blending recruits headed to local programs Indiana and Louisville (all of Kentucky’s recruits are playing in the Jordan game) alongside top-100 recruits from all over the country, the game offers a national setting for guys who may have just missed the cut at the McDonald’s game.

Players like Victor Oladipo, Tyler Ennis and Cody Zeller all played in the game before springboarding to the League. Last year, Diamond Stone played in the game and will be a first round pick in two months. With plenty of talent and size on the floor, onlookers watched the game wondering who would be next. Under Armour fitted the players with some fresh neon jerseys that were loud, but not too loud in what proved to be an sick night of hoops for hoopheads of the Bluegrass State.

Unlike most all-star games, the 2016 group of ballers at the Derby Classic took the game quite serious. They ran a ton of set plays, were calling out different defensive coverages against pick and rolls, and played with an effort that you simply don’t see in most laissez faire exhibitions. The white team walked away with a 141-132 W in a contested game and plenty of players showed out. 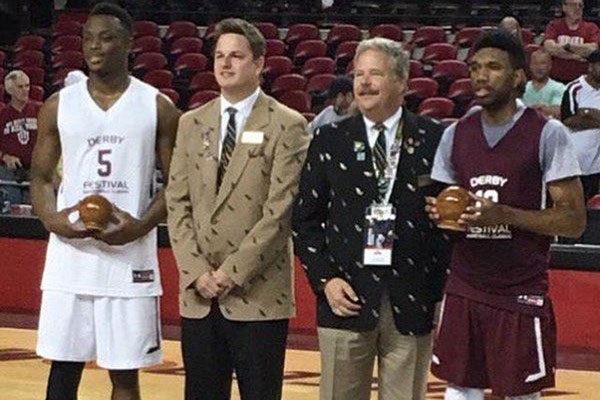 Here are a few of the standouts from the 2016 Kentucky Derby Festival Basketball Classic:

The leading scorer, Mustapha Heron dropped 32 points in straight up dominant fashion for the winning white squad. The lefty did his best James Harden impression with getting buckets via a series of euro-steps, deep J’s, and step backs that got the crowd buzzing. The highest ranked player in the game clearly lived up to the hype and showed why he’s going to be a program changer at Auburn.

After really opening our eyes at the Chance Harmon Memorial Classic, Micah Thomas showed some steady improvement leading up to the Derby. At 6-foot-7, he has legit size for a small forward and the athleticism to match. He shot the ball well from deep, locked down multiple positions on the perimeter, and is deceptive off of the bounce. The big time athlete is off to Maryland next year and already caught the attention of NBA scouts with his play at Derby.

In most all-star games, big men don’t get much love. Joey Brunk disproved that notion with 21 points and 9 boards in Louisville. A late bloomer who didn’t receive much attention until transferring to Southport for his sophomore year, Brunk showed the level of productivity that should allow him to put in work in the Big East. He exhibited great hands, the ability to convert out of the post, and even stretched the D to hit a number of J’s from the perimeter. While he’s not a mind boggling athlete, Joey has the size and skill to help out at Butler from the day he steps foot on campus.

Straight up hounded by the media after the game, Curtis Jones showed off his continual growth at the lead guard position. The Huntington Prep star showed off a great burst, really nice court vision, and was a beast finishing in transition. Given Yogi Ferrell’s graduation, the 25 points, 6 boards, and 4 dimes that Jones put up definitely gave the IU faithful a sneak peek of what the future has in store at the lead guard spot for the Hoosiers.

A former stud on the gridiron as a quarterback, De’Riante Jenkins switched to the hardwood and things have definitely paid off. Still raw, Jenkins showed off the ability to get buckets in so many ways and create for himself at the Derby Classic. The wiry swingman’s D and ability to score points in a hurry will make him a perfect fit for Will Wade’s uptempo scheme.

After dropping times to Trey Lyles for his first two years of high school, it was CJ Walker’s turn to take over at Arsenal Tech and he showed how far he’s come at the Derby Classic. He showed off his sneaky athleticism, is extremely confident, and constantly had his head on a swivel to find the open man. Once committed to Purdue, Walker is the type of point guard that will fit in perfectly at Florida State.

The lone unsigned recruit in the game, Eron Gordon showed why someone needs to lock him up quickly. Eric Gordon’s little bro didn’t do anything too flashy, but his 29 points and 10 boards showed how he simply gets it done whenever he steps on the hardwood. Eron finished at the rack with a bump and like his brother, showed that he could put the clamps on either guard spot. Marquette, Missouri, Seton Hall, Butler, Nevada, and Memphis are currently vying for the combo guard’s services.

While numbers can be deceiving, the 14 points, 6 boards, and 3 assists that Funderburk put up gave everyone in Louisville a glimpse of exactly what he can do. The Cleveland product was super bouncy off the court, ran the floor better than any big in the game, and showed some intriguing skills facing the rack. The Ohio State recruit has prototypical size and athleticism, but needs to continue to develop his game out of the post in the gritty Big Ten.