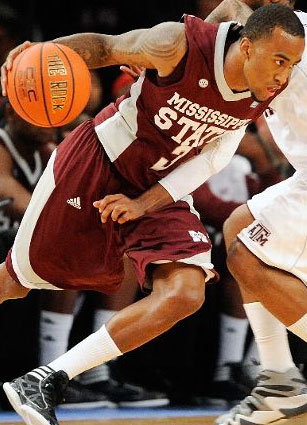 Last night, we watched Mississippi State take down No. 19 Texas A & M, and No. 15 Arizona held off St. John’s for their first road win of the season. Tonight, it’s Bulldogs-Wildcats in a showdown for the 2011 2K Sports Classic title, live from the most famous arena in the world.

The consolation game just wrapped up—it was actually a dramatic finish to a tight game all the way through, with Elston Turner swishing a 15-footer on a bigger defender off a a high screen with 6.0 seconds left, then Nurideen Lindsey missing a pair of free throws with 2.3 seconds to go, to give Texas A & M a one-point win, 58-57. Host St. John’s finishes the two-day event with an 0-2 record.

On to the ‘ship! It should be fun to watch AZ’s Kyle Fogg and MSU’s Dee Bost go at it all game long, and there’s always our favorite X-factor: Renardo Sidney, who will have to match up with a versatile Wildcats frontline, which includes a shooter in Solomon Hill, an athletic freak in Jesse Perry and versatile Bronx native Kevin Parrom. Arizona shot 28 threes last night against the Johnnies, while Mississippi State used a more bruising, physical attack to take down A & M.

We’re set to see tip-off in about five minutes, so settle in, get your popcorn ready, and hover that mouse over “refresh.” If there’s anything you need from me, be it sneaker updates, mascot news or weather reports from up here in the North Press Box area, let me know. MSG, basketball and SLAMonline. Let’s do it!

7:08: Sidney scores again, and it’s Mississippi State 9-3 here in the early going. Second straight night the Bulldogs have jumped on their opponent early. We joke, but in all seriousness if Sidney gets it going MSU could roll.

7:17: Moultrie’s shown some flashes of pro-level skills. He stroked a three to start last night’s game (range) and battles hard on the boards. He’s a 6-11 junior from Memphis, and if he can put some more bulk on that frame, he could have a future. Always room for 6-11 guys who rebound, swat shots and can hit an open look.

7:20: Sidney and Moultrie have 15 of the Bulldogs’ 21 points in the half. 21-11 MSU on top, despite Bost having zero impact so far. ‘Zona looks lost on offense and the bigs are struggling on the defensive end. Gotta rebound!

7:26: Loving the freshman point guard matchup right now: Josiah Turner of AZ vs. DeVille Smith of MSU. Outside of the fact Turner has on some fresh Jordan 5s, both guys are lightning quick, can handle, and give their teams a change of pace. You can throw Arizona’s Nick Johnson in that discussion, too. He (and his Jordan 6s) swatted a Smith layup attempt, complete with chest-pound. 21-19, MSU leads with 10:44 to play.

7:38: Quick sneaker update: Kevin Parrom in the Zoom Kobe VI (grey/blue), Hill in the Jordan 14 again tonight, Crazy 8s and adiZero Roses for the MSU fellas. Oh, and Sidney just botched a point-blank layup off a slick Bost pass, then picked up his second foul. MSU still up, 31-27.

7:45: Bost only has 2 points, but he has 5 assists already, and is really taking on a distribution role. Technically speaking, he is the team’s point guard, so that might not sound surprising, but he’s the team’s go-to scorer and typically plays like a Gilbert Arenas/Monta Ellis type where he needs the rock in his hands. Tonight he’s really looking to get his teammates involved. Been impressed with him in these two games.

7:51: A Nick Johnson three-pointer brings Arizona to within one at halftime. It’s 35-34, Mississippi State with the advantage. MSU shooting 50 percent from the field, AZ 47 percent. Moultrie has 9 for the Bulldogs, Hill with 8 for the ‘Cats. Looks like we’ll have a tight one down the stretch. Can the ‘Dogs pull off top-25 upsets on two consecutive nights?

8:05: You’ll be happy to know I’ve relocated to the press area behind the basket. Just don’t tell anyone. On my way down, I saw Dickie V. Also, it should be noted that Renardo Sidney is not warming up with the team, looks like he’s hampered by a thumb injury. We’ll see if he plays in the second half.

8:12: Random sneaker note: I noticed last night that Kyle Fogg, the ‘Cats leading scorer and a dead-eye shooter, wears an old, worn-out pair of Zoom LeBron IV Soldiers, all-black colorway. Odd to see that these days—a guy who likes to wear the same pair of shoes over and over, especially with the entire Nike and Jordan brand at his disposal at Arizona. Clearly, these are older than this season (only a handful of games in’11-12 so far). Some guys just like that worn feel, huh. Thoughts?

8:17: Bost commits the cardinal sin of saving a loose ball underneath his own basket, leads to a Jordin Mayes triple. Arizona within one again at 42-41. Mayes has eight points, including a couple of threes. Arizona is clearly the more skilled team. Outside of Bost, MSU is relying on physicality and hustle.

8:22: Breaking sneaker development! Nick Johnson, already a shoo-in for kicks MVP of this mini-tournament, swapped his Jordan 6s for Kobe VIs at halftime. Ballsy move to go from high to low tops mid-game, but I like his emphasis on the shoes. They do, you know, make the man. Other second-half notables for the ‘Cats include reserve center Alex Jacobson’s Hyperfuse 2011s and Brendon Lavender’s Cool Grey Jordan XIs.

8:41: Rodney Hood, a lanky lefty forward for the Bulldogs, is projected by some to be a future NBA lottery pick. I can see it. Reminds me a lot of Anthony Randolph, but with better instincts. He clearly needs to bulk up, though. Meanwhile, Arizona is on the comeback trail—it’s 56-53 MSU with under six minutes left.

8:45: Arnett Moultrie is dominating the boards tonight. Right now he has 17 points and nine rebounds. He’s too quick for ‘Zona’s frontline. Mississippi State is up 61-55 with 4:11 left in the game.

8:59: This one’s over, folks. Mississippi State was the better team all night, never really seemed like the Wildcats could find a rhythm on offense, and Bost’s playmaking and Moultrie’s rebounding were too much on the other end. Final score: 67-57 Bulldogs. Two nights, two top-25 teams go down at the hands of MSU. Eat your heart out, Renardo Sidney haters. Moultrie finishes with 19 points on 8-9 shooting (wow, efficient) while Bost had seven assists to go with eight points. Mississippi State is loaded with talent, and clearly have big-time potential.

9:00: MVP of the 2K Sports Classic: Arnett Moultrie (MSU). He deserves it, especially with his performance tonight. The rest of the all-tourney team: Kourtney Roberson (A&M), Nurideen Lindsey (SJU), Jesse Perry (AZ), Dee Bost (MSU). That’s it from MSG, thanks for following along!