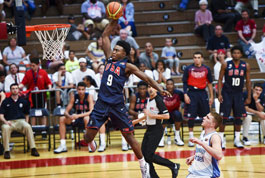 Just a couple of weeks after having landed California’s top prospect, power forward Ivan Rabb, the Cal-Berkeley Golden Bears men’s roster went up to a whole new level on Friday night when it received at commitment from Jaylen Brown, a small forward from Marietta (GA) who many argue is the top prospect in the Class of 2015.

More from the San Francisco Chronicle:

Jaylen Brown, the nation’s top-unsigned recruit in the 2015 class, will play basketball at Cal, according to Scout.com.

The 6-foot-7 forward, a unanimous top-five prospect and McDonald’s All-American, picked the Bears over Kentucky, Michigan and North Carolina on Friday night. Brown is ranked No. 1 on Scout.com, No. 4 on ESPN.com and No. 2 on Rivals.com.

It’s another enormous coup for Cal head coach Cuonzo Martin, who gathered momentum less than a month ago with the signing of five-star forward Ivan Rabb of Bishop O’Dowd-Oakland. Martin also received dose of good news when guard Tyrone Wallace — the team’s leader in scoring, rebounds and assists last season – announced he would return to school for his senior season.

Neither of those decisions were as surprising as Brown’s. Wallace was facing a draft class loaded at his position, and Rabb is a local phenom who had a desire to play close to home.

Brown is from Marietta, Ga., and has no ties to Cal’s program aside from knowing Rabb. He took a surprise unofficial visit to Berkeley in March, making the Bears a major player in his recruitment.

Last season, one of the program’s biggest weaknesses was a lack of depth. But now, in addition to Wallace, Cal will return Jabari Bird, Jordan Mathews and Sam Singer. A likely starting three-guard lineup for Cal looks like it will include Wallace, Bird and Brown, a trio of top-tier players.