A blast from SLAM’s past 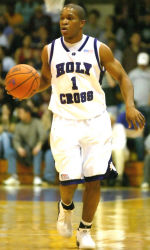 One thing I like about having a column on the site is that it’s going to let me cover players who we just don’t have room for in the magazine (especially with the mag’s new look…which you can check for on newsstands later this week!).

The first player I decided to get at is one whose history with SLAM is even longer than mine, which can’t be said about too many current college players. His name is Torey Thomas, and if you want the numerical description of him, check right here.

As you can see, he’s a damn good player, a do-everything guard who is a huge reason why Holy Cross seems poised to unseat Bucknell and win the Patriot League this season.

But Torey’s story goes much deeper than the numbers. When Torey was 11, he was part of a 10-13-year-old team that won the North American Youth Basketball National Championship, earning, among other things, a feature in SLAM that Russ Bengtson wrote. This was in issue 11, May of 1996, when I was in college. I probably bought the issue at a newsstand but this story didn’t register with me. Fast forward to 2005 and I meet a guy named Darryl Jenkins, who works with kids at a non-profit in Westchester County. Darryl wanted to bring some kids to our office, which he did last year. When he came he talked about how he coached this youth team that was in SLAM. Not only that, Darryl said, but one of his former players was now a star at Holy Cross.

So I looked up Torey (far left in front row), and sure enough he’d gone on to great things after being at SLAM. He started by passing on his local high school, White Plains, which has a great basketball program, to attend Trinity Catholic in Stamford, CT. “Going there worked out extremely well for me,” recalls Torey, who was very happy to relive the thrill of being in SLAM and all he’s done since when I got him on the phone last week. “I made a lot of sacrifice, making a long commute every day and having to answer all my friends questions about why I didn’t just stay at White Plains. But I had think I did the right thing—Trinity is a small school where I really focused on my studies and developed as a young adult.”

He also developed into a good enough lead guard to win Connecticut Player of the Year as a senior in 2003. Even with that performance, Trinity Catholic wasn’t exactly on every college coach’s must-watch list, and Torey is a short 5-11. As such, the college interest was somewhat lacking. “Hartford really wanted me, and I had some interest from Canisius and William & Mary, but there weren’t a lot of schools,” Torey says. “I guess there was a height bias. Plus, I played an up-tempo game that might have been more suited for a West Coast program, but they didn’t see me.”

Lucky for Torey—and Holy Cross—Crusaders’ coach Ralph Willard made a special trip down to Stamford to see Torey work out and offered him a scholarship on the spot. “I said yes because I appreciated him taking the time to come see me. Plus, this is a program with great tradition,” Torey explains.

It’s been almost four years in Worcester for Torey, and we’ll let him explain how well it’s gone. “Two 20-win seasons as a starting point guard, closing in on 1,000 points, 500 rebounds and 500 assists, high on the all-time Patriot League leaderboard in assists and steals, part of a team that won an NIT game at Notre Dame in 2005. It’s been amazing.”

He’s also loved college and is on track to graduate this spring. All that’s missing from the resume, as Torey is quick to point out, is an NCAA Tournament birth. “And that’s what we’re working towards now,” he says. “We’re good enough to do it and we’re getting better. Just gotta finish out the season and do it in the playoffs, too.”

With the Patriot League season about one third over, Holy Cross is at 5-0, in the driver’s seat for the top seed in the post-season tourney (and thereby the favorite to win the league and get the automatic bid).

I know this much: on the strength of Torey’s history alone, I’ll be pulling for the Crusaders.