A Different Type Of Game Notes 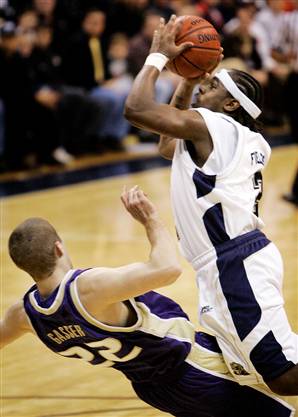 As I wrote last week, there wasn’t much time to watch conference tournaments last week. There was little TV watching until the weekend, and I couldn’t make my usual mid-day jaunts to the Garden for the Big East Tournament either. I more than made up for this deprivation last Thursday night, however. Credential in hand and bball gear in my gym bag, I trekked over to Madison Square Garden a little after 7 PM.

The credential was for obvious reasons; I was going to attend that evening’s doubleheader, which consisted of West Virginia-Louisville followed by Marquette-Pittsburgh. The bball gear was less obvious. Once I got into the rotunda area—a huge, cement-floored room that serves as the media dining and work room for the hordes of media members that descend on the Garden for the Big East—I found my man Burton Chawla. I’m not sure if Burton has been discussed on the site before, but he used to work in SLAM’s ad department. He’s since moved on to helping out at Rise Magazine, but he also has a steady gig at MSG. Basically, if there’s a basketball game played at the Garden—Knicks, college or high school—Burton is there, making sure everything is running with the stat sheets and other things that media members need during the game. This makes Burton an employee of the Garden, and, to paraphrase AmEx, membership in that group has its privileges. Quite simply, on a few rare nights every year, they get to play on the Garden floor. Thursday night was to be one of those nights.

On short notice a year ago, Burton had invited me to play in this exclusive late-night run but I hadn’t brought my gear that day. There were then rumors of a run after the Coaches vs. Cancer last November, but that was a little vague. But Burton had implied that at least once during Big East the floor was open, and I remembered. I hit him up last Tuesday to see if the court would be open, and he said it would be Thursday. Burton had to do some cajoling with the guy who is in charge of letting employees play there, but I had arrived at the Garden under the impression I’d be part of a game that made the evening a triple header.

At halftime of Louisville-WVU, Burton stuck my basketball gear in the back of the rotunda and went and did his job. I did mine, as well. Without any official assignments to be working on this just meant sitting in the third row and watching a couple decent games. Louisville was far more talented than WVU in my opinion, but the Mountaineers and their Grant Wahl lookalike big man Jamie Smalligan hung tough, forcing one and then two overtimes before finally succumbing to the Cards. The best player on the floor was Terrence Williams, Louisville’s rock-solid guard. The two overtimes were aggravating to me because I was getting drowsy (remember, last week was a non-stop grind in the office), but it didn’t occur to me that my game was in jeopardy.

After listening to some of the post-game press conferences and drinking some terrible press-room coffee, I was back at courtside for the beginning of game two. I can’t say I’m a Pitt “fan” (my Big East team has always been St. John’s), but I am fond of some of their players; Levance Fields most prominently. Fields is the Panthers’ sophomore guard who grew up in Brooklyn and attended Xaverian before heading to Pittsburgh, following in the exact steps of Chris Taft. Where Taft is an effort-averse big man, however, Fields is a sparkplug of a point guard. Easily picking up where Carl Krauser left off, Levance possesses all the heart, moxie and showmanship a New York-bred PG should have, as well as the requisite poor jump shot (Levance’s features this convuluted pull-behind-the-head move that looks really dope but is totally inefficient and inconsistent, leading him to chase swishes with airballs). In any event, I wrote about Levance back in the day at Xaverian and loved how he played. He was also a good kid and I was thrilled to see him playing so well at the Garden.

I was less thrilled when Burton came and sat with me late in the first half. According to Burton, the late finish to the Louisville game had led to discussions of skipping the post-game game. Admittedly, it was already nearly 11 PM, but this was rough news to hear. Physically, I’d lugged my gear over and drank coffee. Mentally, I had started to get really geeked up about the fact that I’d be following these guys onto the court.

Fields (13 points, 4 assists, 4 rebounds), Aaron Gray and the rest of the Panthers kept the second half entertaining (Marquette’s ballyhooed guard, Dominic James, however, did next to nothing, raising serious questions in my mind about his NBA readiness, or lack thereof) before holding on for an 89-79 win. Just as the game was ending, Burton—who’d gone and done whatever it is he does for a while—made eye contact with me from across the press area and gave me the decisive thumbs up; we were playing!

I faked my way through caring about what creepy Tom Crean and then Jamie Dixon had to say in the postgame press conferences, and then, as they were wrapping up, grabbed my gym bag from Burton and ducked into the bathroom. When I came out, my credential was old news.

I tentatively went out to the court where a few Knick ballboys (who’d been helping out behind the scenes at the Big East) were loosening up with a game of 21. It was already past 12:30 AM. Within the next 20 minutes, while some unfortunate reporters were still filing the late versions of their stories, the Garden floor filled up. There were about 20 guys (as best I could gather, I was the only “guest”) interested in playing, which broke down into two games of 4-on-4 with a couple guys having next at each end.

Off the floor, the lights were being dimmed and maintenance men swept up the oceans of empty cups and discarded programs. On it, things remained as they had been for that night’s games. I repeatedly wandered over to the Tournament logo at midcourt and stood on it, envisioning myself playing in college ball’s greatest conference tourney (if it didn’t move around so much the ACC could have staked a claim to this title).

But honestly, as cool as it was to be on the Garden floor with a ball in my hand, dudes were not out there to stare at the rafters. Cats were actually balling very hard. In fact, my low-budget point guard game (I consider myself a strong passer with good court vision, but my handle is mediocre, my defense too slow and my shot erratic. On this night, for reasons I’ll try and excuse later, I was straight-up off) borderline made me a liability on a team that had Burton (5′ 6″ but with a good outside shot and aggressive defense), some dude named Rob (money jumper) and Shannon (a longtime SLAM favorite as a Knick ballboy, he’s a complete player, effective inside and out). The team we were playing also had three excellent players and one weaker link. But more than just noticing everyone’s solid skill levels, I noticed how hard everyone was going. Fouls were called and contested, the score was disputed. It was your typical, intense, pick-up game, and it could’ve been taking place on a playground in Brooklyn as easy as on the floor of the “World’s Most Famous Arena.” I don’t think this disparity in mental approach between my touristy bemusement and these other guys’ we’re-here-to-play-not-gawk intensity helped my game, but that’s just how it was.

By 2:30 in the morning, with Burton and I having played in four games to 12 (three of them lasting longer in order to win by two), we retired to the other end of the court. That end’s games were over and so we did some light shooting drills at the vacant basket. I wanted to hit my shots, sure, but I was still more focused on the surroundings. Sure, the lights were way down by now and there was more garbage than people in the stands, but it was still a surreal setting. Two quick notes about the shooting experience that you might find educational: the backdrop is tough and composite balls suck. For real. I get to play maybe once a month, and when I do, it’s always in a small gym with a leather ball. To play in a place with thousands of seats between the rim and the wall, and to shoot with a ball that felt like it was covered in dull sandpaper, was not easy. Respect due to every pro and college player that balls in a big arena, and even more respect to the NBA players that forced the “new” NBA ball into early retirement. Like Steve Nash, my fingers were bleeding by the time I walked out of the Garden at 3 in the morning.

But it was well worth it.