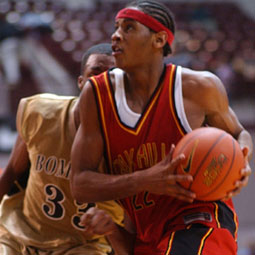 On a muggy afternoon in the Queen city, Charlotte North Carolina, some of basketball’s royal family gathered for a special reunion.

Oak Hill Academy, the prep hoops powerhouse from Mouth of Wilson, Virginia, held its first reunion basketball game this year in the new Charlotte Bobcats arena. Sponsored by Jordan Brand and SLAM magazine, the event brought together many of the stars that helped make the name Oak Hill Academy synonymous with hoops success to honor the school and its legendary coach, Steve Smith.

Completing his 22nd year at the helm of Oak Hill basketball, Smith has managed develop over 122 division 1 players, 22 McDonalds’ All-Americas and 20 NBA draftees during his time as coach. Some of those players like Rod Strickland, Jerry Stackhouse, Carmelo Anthony and Jeff McInnis joined him to help celebrate the tradition that Coach Smith started.

“This is our family,” said Stackhouse when asked what brought him to Charlotte for the game tonight. “I came to support Coach Smith. His family became like a family to me and a lot of other players because we were all so far away from home. His family became my family.”

That familial spirit is what brought out NBA veteran Rod Strickland. A far cry from his NBA days, Rod today sports a crop of salt and pepper hair, and his moves on the court aren’t as quick as they once were, but his memories of Coach Smith and what Oak Hill meant to his development as a player came to him in a snap. “I had to play against the best competition and with the best competition. It was like being in the streets and having to bring your best game everyday.”

The game itself featured a who’s who of college, former NBA, and amateur talent. Being that current NBA players weren’t allowed to play in the game, the pro talent took to the sidelines to act as honorary coaches.

The Red team was coached by Jerry Stackhouse, Jeff McInnis, Rajon Rondo, and Josh Smith, while the Yellow team was helmed by Carmelo Anthony (who should change his name to LL Cool C, the way the little girls in the crowd screamed every time he stood up to signal a play but that’s another story.)

The Gold team, led on the court by North Carolina’s current point god Tywon Lawson and Charlotte native and Clemson star KC Rivers, jumped out to an early 7-0 lead before John “Helicopter” Humphrey stopped the bleeding for the red team with back to back alley-oops.

But that was just the beginning! By the end of the first half, the red team was down by 23 points. When asked what Coach Smith would tell his players after getting a beat down like that in the first half, Jeff joked, “He’d tell us to keep playing. We’ve got too much talent out there. Besides, our team is full of old guys, we have to get them in shape.”

After the first half, a dunk contest was held where John Humphrey took home the trophy despite missing several dunks a la Nate Robinson. The highlight of halftime was when former greats Ron Mercer, Carmelo Anthony, Josh Smith, Jeff McGinnis, Rod Strickland and the schools first legitimate star Calvin Duncan were all inducted into the Oak Hill hall of fame. When asked how it felt to go into the ring of honor, Strick said, “It’s an honor just to be mentioned with some of these names. I’ve been playing for a long time, and to be recognized at all is a great feeling.”

After the halftime festivities, the game resumed, and the Gold team continued to take it to the Red team. But the efficient work of Kevin Lyde down low going off for 20 points and making all his field goals, kept the red team alive as they fought to tie the game as the 3rd quarter came to an end.

As the fourth quarter opened up Charlotte native KC Rivers came alive, no thanks to coaches Stackhouse and McGinnis. After jaw jacking with Stack and Jeff about who’s national championship team would beat the other, with Stack and McGinnis laughing at the thought that Rivers 2004-2005 team could hang with their 92-93 team, (For the record, I’m with Stack here, that 92-93 team was loaded) Rivers went on a barrage of his own that kept the yellow team alive and with the lead.

But by the time the buzzer sounded, the gold team would be victorious. The score was the least important aspect of the night. This was a night about teammates and friends who came to support a great coach and a great program.