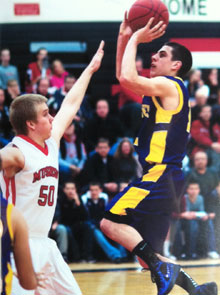 Chances are that you haven’t heard of this Big Three.

All three are ranked among the top-10 prospects in Wisconsin’s Class of 2014, with mid to high-major Division I programs starting to pick up interest, but they each embrace the mentality that defines the club circuit’s antithesis to an all-star team.

LaChance, Ellingson and Timmer, along with 6-5 Chad Kanugh, have been playing together for Ray Allen Select since they were 10 years old with Riley’s dad, Tom, as the coach. Aside from first-year players Devante Jackson (6-6 forward, Brown Deer High School) and Cooper Radtke (6-5 forward, Oshkosh North), the rest of the team is made up of players who have been playing with Ray Allen Select for at least three years—something basically unheard of on the circuit.

“It’s been great,” said Riley, a 6-1 point guard from Brookfield Central High School. “We all like to see each other do well. It’s not about who’s getting all the points, or all the recognition, we just want to win games. I love playing with those guys and it never gets old. We have such a good feel for each other on the court, and we got along so well off it, it’s almost like brothers to each other.

“Obviously we all have the dream to play Division I basketball at the highest level possible, but when these live periods come around we don’t play any different than if we were practicing in the gym. We just try and go out to win every game.”

According to Tom LaChance, the team practices at least twice a week and sometimes as many as four times. Much of the focus is on individual skill development, but the team also runs a flex offense and is constantly tinkering with the playbook.

While most club teams with a cast of Division I hopefuls may change rosters from tournament to tournament, practice possibly once a week and just rely on sheer talent to carry them through games, Ray Allen Select has relied on its dedication to working as a team to be a catalyst of its success.

The squad captured Platinum division championships last year at prestigious national events such as the Battle for the Arch in St. Louis, Howard Pulley in Minnesota, Spiece Run-N-Slam in Fort Wayne and the NY2LASports Summer Jam in Milwaukee, and capped its summer with a run to the final four in their age group at the Adidas Super 64 in Las Vegas.

As the NCAA certified live periods began on April 20, Ray Allen Select took home the championship at the NY2LASports Spring Extravaganza and reached the semifinals last weekend at the Adidas Spring Classic in Indianapolis.

“I’ve never seen them back down,” Tom LaChance said. “We traveled all over the country and got our butt kicked a lot when we were younger, and I think that really toughened them up. So now there really isn’t anything they’ll see, that they haven’t seen. I think that’s why a lot of them did well on the high school level. We had eight kids start on the varsity level as freshman and this year we had six first team all-conference players. They’re used to playing against the best competition and I think that’s helped them in the long run. All these kids are the best players on their high school teams. When they come together here, their number one overall goal is still the team.”

Timmer, a 6-1 lefty who has excelled playing on and off the ball, averaged 18 points a game during an all-conference sophomore season to go with 7 assists, 6 rebounds and 3 steals but feels like setting aside any individual agendas has been a key to Ray Allen Select’s success all over the country.

He’s already garnering interest from programs like Creighton, Northern Iowa, UW-Milwaukee, South Dakota State and North Dakota State, but never concerns himself with which coaches are in the stands during the NCAA-certified live period tournaments. None of Ray Allen Select’s DI prospects do.

“When we play, we’ve been so successful that when college coaches come to watch us play they see how much of team we are,” Timmer said. “We swing the ball, share it and the recruiting just takes care of itself. Every game is different so all of our players will get noticed, so it will pretty much take care of itself.

“No one really cares who gets the credit. One kid can be the best kid on the team one game, and then another kid can be in a different game. We just really enjoy all our trips and time in the hotel. It’s so much better playing against all these other guys because compared to high school the competition is much better. Playing with guys who are my friends and who are so good is a real fun time.”

Ellingson stands 6-4, and will torch defenders if they give him more than an inch on the perimeter with a quick, and pure release. He made an immediate impact with his high school team as a freshman and earned all-conference honors as a sophomore (17.5 points, 5.04 rebounds, 2.3 assists) relying on his sweet stroke and developing mid-range game.

Like Timmer his recruitment is in its infancy stages, but he’s already started to hear from Creighton, Northern Iowa, UW-Green Bay, Wisconsin, Virginia, Army and South Dakota. But when his opponents at one of the national tournaments they travel to has an offer from Duke or North Carolina, he doesn’t flinch.

“We’re all having fun but we know we can compete with everyone,” Ellingson said. “We’ve done that growing up since fifth grade. We know that we can play with any of them.”

Like any of his other teammates, he’s confident in his individual capabilities but more concerned with the success of those in the same uniform.

“I feel like I’m a point guard,” Riley said. “When I was younger and coming up I was more of just a stand still shooter. But over the years, I’ve developed into a point guard. I love having the ball in my hands and making my teammates better. Obviously I can shoot the ball from the outside too. I just like getting up and down and making my teammates better.”

LaChance, Ellingson and Timmer may be drawing the most interest collegiately at the moment, but that’s not to say a handful of others won’t soon start fielding some letters, phone calls or text messages. Jackson, Radtke, and Ray Allen Select’s other big man Ricky Landers (6-8 forward, Wauwatosa West) all deserve looks from DI coaches as well.

Regardless of what their recruitment process is, everyone on the Ray Allen Select bench comes from a high school team where they’re role is much greater. But the transition from stud to role player isn’t a difficult one to make. At least not for Timmer, who’s been doing it for the last six years.

Now a group that has gone from scrawny 10-year-olds getting worked at regional tournaments, to one of the best 16-and-under teams in the country, followers of club basketball and college basketball recruiting will start having to get used to seeing their names.