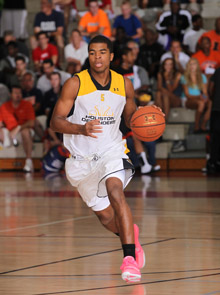 When you’re a consensus top-five player in the country—with your choice of colleges lined up for your services—you wouldn’t be blamed for sitting out with an injury during a game on the club circuit in July.

After coming down hard on his tailbone Friday trying to take a charge, the 6-5 point guard played Saturday and Sunday in the Under Armour Summer Jam presented by NY2LA Sports, despite being clearly hobbled.

“We’re real competitive and we hate to lose. We don’t make excuses and that’s something our dad helped instill in us,” said Andrew, the Houston Defenders’ primary ball-handler.

Coached by Aaron Harrison Sr, Andrew and his identical twin brother Aaron—also ranked in the top five by Scout—helped guide the Defenders all the way to the semifinals Sunday before losing to the Illinois Wolves.

Andrew and Aaron, who will be playing collegiately together—most likely at Kentucky, Maryland, Baylor, Villanova, Texas or SMU—have been on the national radar for quite some time thanks to their size, athleticism and ability to excel at both guard spots. But it hasn’t always been like that.

“When we were younger we weren’t the best players on our team,” said Aaron, who plays off the ball with the Defenders. “So we were just happy to play. We went to the gym with my dad a lot and just always worked hard so this is how it turned out.

“It’s a dream come true, really. Everybody wants to be the best. We just have to keep working hard and see what happens.”

Their talents were on full display in Milwaukee at the Summer Jam, which went from Wednesday afternoon through Sunday evening. Aaron was dialed in from three-point land the entire tournament, and buried six against Full Package Elite (IL) in the first round of the playoffs on Saturday.

The Travis (TX) High standouts also had a seemingly innate ability to control the tempo of any game they played against some of the country’s best teams. Their competitiveness has fueled their work in practice and enabled them to become uniquely talented guards.

“We’ve been working since we were 6,” Aaron said. “It’s all in your mind. You just have to know how to control the game and be confident. That’s pretty much it.”

According to Andrew, the brothers have never been on opposite teams—not even at camps. But while they naturally enjoy each other’s company, they both enjoy spending time with their summer teammates, traveling the country to places like Milwaukee.

“This was my first time and we went to the movies yesterday,” Andrew said. “[Milwaukee] is pretty fun. It’s almost like Houston. I just like hanging with my teammates. We’ve been like brothers because we’ve been together since like fourth grade. We know each other and have each other’s backs no matter what.”

“It’s fun,” Aaron said. “AAU is really about bragging rights and showing who’s the best. We come out here every day and try to prove to every single person that we’re the best players in the country.”

While similar in appearance, court demeanor, future college destination and female artist preference (Nicki Minaj over Rihanna), the two have some basketball-relevant differences.

“He gets in the paint whenever he wants,” Aaron said. “I’ve never seen anybody really just take the ball from him. He’s stronger than I am too.”

Griffin was on the receiving end of alley-oops from the Harrisons all tournament and dunked the ball with ferocity every time. He displayed relentlessness in the paint, and a football player’s mentality on the basketball court.

His nasty disposition on the hardwood shouldn’t come as a surprise because he is verbally committed to Texas A&M as a wide receiver—and ranked as a five-star prospect by both Rivals and Scout. Unlike his Defenders teammates, Griffin has to decide how many sports he wants to play in college.

“I want to try it,” Griffin said. “But one of them isn’t going to work out, and whatever one doesn’t work out I’ll do the other. I use football to my advantage [on the basketball court]. Just throw it up and I’m going to go and get it, then just dunk it.”

“This sucks, we didn’t even do well,” Griffin said. “We played bad defense. We were joking around a little bit. Everybody knows that we should have been [to the championship].”

As for what he expects in Orlando this week at the AAU Supershowcase, Griffin was clear.

“We’re going to win it all,” Griffin stated.