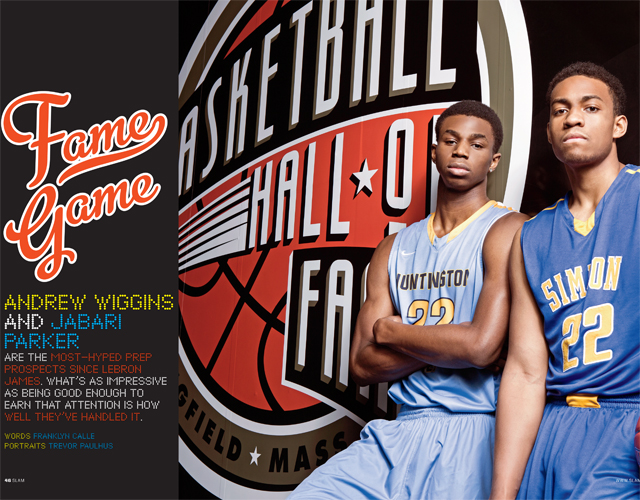 There isn’t a soul on the streets of Springfield, MA, on a frigid Sunday night in January, but inside the Sheraton Springfield Monarch Place hotel, a pack of anxious basketball fans hoping to catch a glimpse of history are bubbling over. On the 11th floor of the hotel’s atrium, above the crowd, a disappointed preteen can be overheard speaking with her father.

She’s not the only one getting antsy. Down in the lobby, a handful of people well past their teenage years linger with basketballs, posters and other memorabilia in their hands. This being the home of the Naismith Memorial Basketball Hall of Fame, it’s not unusual for hoops legends to visit. Thing is, though, the crowd clogging the lobby isn’t waiting for a star of years’ past or even a current NBA player; they’re waiting for 17-year-old (18 when you read this) wunderkinds Jabari Parker and Andrew Wiggins.

In case you’re not up to speed on the prep stars—and a lot of people already are, based on the number of their Twitter followers and the non-stop buzz surrounding their college choices—let us give you a quick primer. Parker, who hails from Chicago, and Wiggins, from Toronto, have at different times each been labeled the most prolific high school prospect since LeBron James. With that scouting report in mind, both are understandably viewed as program changers in college and potential franchise players in the League. Coincidently, both also happen to be sons of former NBA players, both are listed at 6-8, and both wear No. 22 for their high school teams—Chicago (IL) Simeon and Huntington (WV) Prep, respectively.

Parker and Wiggins are in Springfield on this mid-winter weekend for the Spalding Hoophall Classic, one of the premier invitationals on the high school calendar. Earlier in the day, we brought these players together for a historic cover shoot. Despite all their ties, our shoot is the first time the two prodigies have actually had the chance to hang out with one another.

Parker’s dad, Sonny, was taken by the Golden State Warriors with the 17th pick in the 1976 NBA Draft. Jabari’s first basketball memory is when, at 6 years old, he was trying to get shots up at halftime of games in his dad’s AAU summer league, the Sonny Parker Youth Foundation. Being around his father is what Jabari credits for fueling his early passion for the game. Not too long after, his skill set began matching that passion. “I think when he was in the fourth grade, he made the eighth grade basketball team, but they wouldn’t let him play because of liabilities and his age,” says Sonny. “He played with my sixth grade AAU team when he was in the first or second grade. He was pretty much bigger than those other kids.”

In the summer of ’06, Sonny took 11-year-old Jabari to Simeon to an open gym. Simeon had a senior point guard named Derrick Rose at the time. Young Jabari was unfazed by the older guys and cruised through the session. “It was big—to see just how skilled he was,” remembers Simeon head coach Robert Smith. “He had a high IQ; he was really skilled at an early age. He was doing things out there that some high school players couldn’t do at the time.”

Until ’09, Simeon had never allowed a freshman to play on its varsity team—not even Rose. It was a rule that Smith’s predecessor, the iconic Bob Hambric, had implemented. But according to Smith, allowing Jabari to play varsity as a freshman wasn’t a hard decision at all. “We needed to make sure we challenged him,” says Smith, “the whole time.”

The passion for basketball that Jabari got from his father was nearly matched by a spirituality imparted by his mother, Lola, a Mormon who raised Jabari and his siblings in the religion. Jabari’s commitment to the religion crossed into hoops last year when he made it clear that BYU—a private university run by Mormons—was on the short list of colleges he would consider.

Fast forward to today and Jabari has won three straight Illinois Class 4A titles and is hungry for a fourth. “Coming in as a freshman, that was my biggest goal,” he says. “I wanted to win four straight state championships.”

Parker’s work ethic has given him more than just state trophies. He was named the Gatorade National POY in 2012, making him just the fourth underclassman after Greg Oden, LeBron James and Brandon Knight to be so honored. And while many kids Jabari’s age would love the public hoopla his success has created, Jabari is still a little uncomfortable with it. He recognizes he’s going to have to deal with it for years to come, though. “It comes with the territory,” Parker acknowledges. “We chose this life. It’s something you have to deal with if you want to play at the highest level.”

Comparisons also come with the territory. In Jabari’s case, people have invoked everyone from Carmelo Anthony to Paul Pierce in addition to King James. Coach Mike Krzyzewski, Parker’s future coach at Duke, has said he sees the forward as a mixture of Kobe Bryant and Grant Hill.

“If you’re real good at that age, of course they want to compare you to somebody that’s doing big things,” Parker says. “It was hard at first, but now I know where I need to aim at. I need to aim high… and that’s the only way, because LeBron is at the top.”

Heading into last summer, Jabari was ranked as the top player in his class. Then, a fractured foot injury kept him out of play for most of the summer. Meanwhile, as Parker recovered, Wiggins posted one strong showing after another. And once Wiggins officially reclassified to the Class of 2013, most rankings (including the one I write for SLAMonline) moved him to the head of the class. Jabari admits that the small drop provided fresh motivation. “It brought me beneath earth,” says Parker. “Everybody is putting you down, kicking you to the curb. That’s when you figure out, where is your motivation going to be from? I’m hungry because I’m playing catch-up. Can I ever make it to where I was at first? And can I do better? That’s my whole mentality.”

This past fall, within minutes of declaring his intention to attend Duke, Jabari says he was getting thousands of hateful messages tweeted at him. Still, Parker—whose Twitter bio quotes John Wooden: “You can’t let praise or criticism get to you. It’s weakness to get caught up in either one”—brushes off the hate.

“It just gave me a sign that I’m almost there,” he says. “I’m almost at the big leagues because you see Kobe and LeBron, they face a lot of scrutiny. So I just say it’s almost time for me to be in that glare, if all goes right.”

While the comparisons to James seem off to us in a purely athletic sense, Parker can also do just about everything on the floor. He can handle the ball and post up. He can unleash his smooth jumper from far or create space to get it off inside. Most notably, he’s never overzealous, rarely forcing a shot. In that regard, Parker, who is averaging 18.7 ppg, 10.3 rpg, 3.8 apg and 1.4 bpg as we go to press, plays differently than most preps. He’s a throwback, which might be explained by the fact that his favorite player, as well as his father’s, is Oscar Robertson.

Says Parker, “The Big O, he’s kind of the foundation for me because he kind of evolved the game for what a small forward is—playing everywhere on the floor. The old school guys, I have so much passion for them because they did it so smooth. They had so much more fundamentals than our bigs. We are a little bit stronger and faster, but the skill back then was better.”