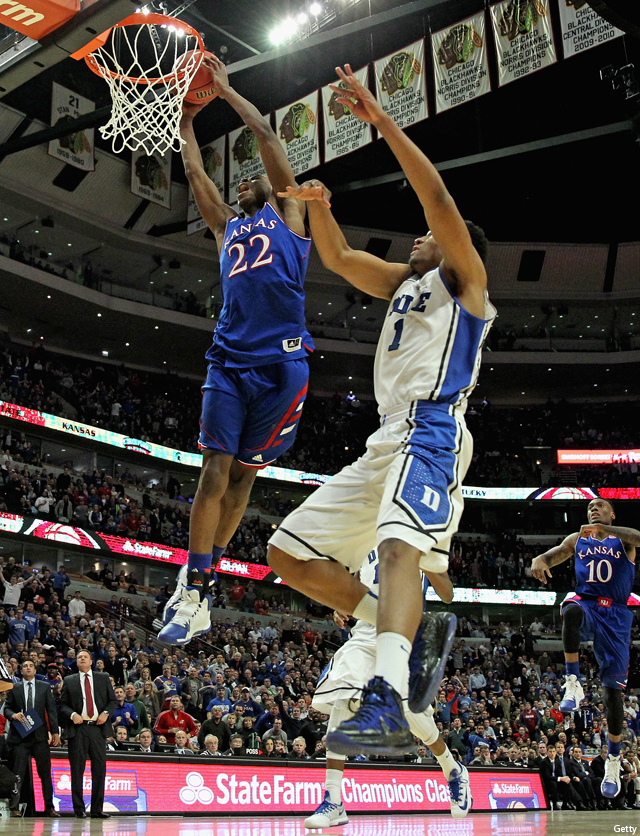 It’s not often—(ever?)—you get four of the top five rated college teams tipping off in a double-header in a place like Chicago’s United Center.

That was the deal November 12, when Michigan State took on Kentucky and Kansas played Duke. Within each game were many mini-games, swirling around such unknowns as whom the eventual NCAA champion might be, which player could raise his stock in this early spotlight, which famous coach—Tom Izzo, John Calipari, Bill Self, Mike Krzyzewski—was maybe a tad more famous than the others. (On that one we’ll tip our fedora ever so slightly to Coach K.)

But it was the youngsters, the first-time collegians, who hogged most of the glare. In the first game, Izzo’s Spartans, led by junior guard Keith Appling, squeaked out a win over Kentucky, 78-74. But it was the Wildcats’ monster freshman power forward Julius Randle who shook the crowd up with his 27 points and 13 rebounds. Of course, he also had 8 turnovers, and Izzo lamented afterward that Randle, like the rest of the Kentucky youth organization (four freshman starters), would have to learn to pass and also get to know his new teammates.

No, it’s not as if these teenaged stars are unknown. Randle and other star preps are identified by scouts and the media about two seconds after growth spurts. Randle’s been in SLAM a few times, you know?

Then came the second game, and this was the real treat—national high school superstars and SLAM 167 cover subjects Andrew Wiggins (Kansas) and Jabari Parker (Duke) heading on to the hardwood together for the first time as collegians. Of course, they’ll both be one-and-dones, and we can debate the folly of using college as a minor league, but for the night it was talent on talent. And what talent it is!

Parker, 6-8, 235, and Wiggins, 6-8, 200, are very different players. Parker is like a huge ballerina, sweet from inside and out, deadly on threes and jams. Wiggins is wiry, quick and built—built, I said—like Michael Jordan. In the first half, Parker exploded with 19 points, 5 rebounds, a block and 2 steals.

In the second half, Wiggins thrilled fans with 16 points, finishing with 22 and 8. The pair didn’t go up against each other that much, though after the game Coach K would say Parker switched to Wiggins at the end without asking permission.

In the photo above you can see Parker trying to stop Wiggins on a breakaway monstrosity. Foul. Jam good. And one. Three points. Kansas would win 94-83. Parker had a game-high 27 and 9.

We might have seen 1-2-3 in next spring’s NBA Draft: Parker, Wiggins, Randle. Gotta catch these students while you can.