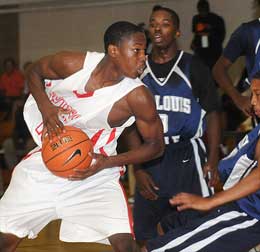 Down at the AAU Nationals this summer in Orlando, FL there was an array of big-name talent that had already been considered as being near the top of their respective class for years. But each and every year, with some scouting services ranking seemingly every kid possible, there are always players who sneak up and catch the basketball world by surprise.

When I first met Archie in Orlando I was shuffling back and forth between his 16U Arkansas Wings teams’ second-round game against the Southern Kings and another game that was being played on the court next to it. In between the shuffling, I saw Goodwin slither by his man on the baseline, rise up, and hammer home a two-handed dunk with ease. I decided to take a seat and watch the rest of the contest, my eyes firmly fixed on No. 10.

Time and again, Goodwin shook the defense with an effortless feel and either threw it down, got fouled, or made the right pass. His team won the heated affair 58-49 and I approached him after the game to see how he was feeling about the contest. I met a ton of players in Florida but in those first few moments Goodwin struck me as different to some extent. He didn’t carry himself with an ounce of cockiness—rather he was interested in discussing the game that he just played, his favorite players (Kobe Bryant, Kevin Durant and Rajon Rondo), and when I could get another look at him.

The ease with which he carried himself on the court and the politeness he acted with each time I approached him during the tournament were in a league of their own. I made a commitment to visit him in Arkansas during my upcoming semester to help him with his jumper and he said he’d be thrilled for me to visit, so I mapped out the trip.

Every player has a different basketball story. Archie “A-One” Goodwin’s began when he was 5 years old.

“I remember back me and my wife, we was just sittin’ down and I remember he ran in the house crying because he lost this game to this girl,” said Datron “D” Humphrey, Goodwin’s stepdad. “I said ‘What’s wrong?’ but he didn’t wanna tell me that he lost to her. Before that, I never introduced him to basketball, never did anything with it. So I asked him, Do you want to learn how to play the game of basketball?”

From that day forward, Goodwin was on a on a mission to become the best basketball player he could be. “I remember telling him that I could teach him the game of basketball but that it was gonna be hard work and he said he wanted to learn,” continued Humphrey. “Man, when I say we hit it, we hit it, and we hit it hard. He stayed with it and it’s been a lot of fun and a lot of hard work.”

As Archie grew up, D started to realize that the hard work was paying off and that there was something special inside of Archie. “It was sixth grade and he got a rebound and there was two guys right here,” explained D, using his fingers to further detail that the players were side by side near about the free throw line. “And I’m sitting there thinking, What’s he gonna do? What the hell’s he gonna do with this basketball? And he takes it and throws it between his legs to split them. He went in and used the left to take the shot — he missed the shot — but the only way he could get away with that was if he threw it between his legs and split them. He went to the free-throw line, and I remember thinking, Wow, this kid is special.”

Between people such as Datron, his father, Archie Goodwin Sr, his brother Soloman “Solo” Bozeman, Dominc Ghant a.k.a. “MV,” Mike Charles and Sammy Clark there has always been a group of solid people around Goodwin, almost like a family, to help him make good decisions and to keep him on task to reach his goals with the game of basketball.

So when he wasn’t ranked in the Top-150 players by Rivals, Scout, ESPN, or any other major scouting service heading into AAU season as a sophomore in high school, nobody around him saw the need to hit the panic button. You see, Goodwin had the size of a point guard most of his life (seventh grade: 5-9, eighth and ninth grade: 6-0, start of 10th grade: 6-2, presently: 6-5, 190 pounds, and growing) combined with his freaky athleticism, a scorer’s mentality, and constantly improving playmaker skills.

A-One was already known within his state, but with his skills and confidence steadily improving and the AAU season approaching quickly it was finally time for him to make his mark at the national level. Playing with the renowned Arkansas Wings, he started to take flight. Perhaps D said it best: “He’s starting to realize that he can score at any given point on anybody. Now he knows that he can score but he can also shut this guy down also. He’s maturing.”

Those same scouting services that hadn’t had him ranked placed him within their top 20. Colleges started to call from all around the country. With a “who’s who” of hoops powerhouses recruiting him, Goodwin is savoring the moment—but he’s still working hard to reach his ultimate goal—the one that he has had his eyes on for quite some time now. “I would like to go to the top level, which is the NBA,” Goodwin stated in a confident but unsatisfied tone. “Not just being there, but making an impact and being a superstar at that level. I just have a lot of confidence—no cockiness about me but I just have a lot of confidence in knowing that I have the ability to get that far. If I keep working hard and getting stronger every day and every year I could ultimately get to that point.”

There are so many players in the country that say these same things. But how many of them actually work hard enough to achieve their words? Very few.