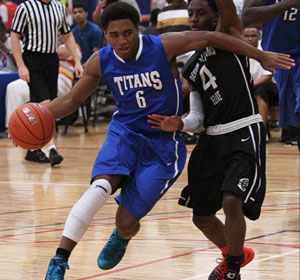 Avery Johnson Jr couldn’t imagine life existing without basketball. “I just love playing basketball; it’s probably one of my favorite things to do,” the 5-11 and a half point guard told SLAM by phone. The son of former Brooklyn Nets and Dallas Mavericks coach, Avery Johnson Sr, basketball is a game he takes seriously, “He’s very skilled and very tough,” said his AAU coach Scott Pospichal, who coached him this summer as a member of the Texas Titans.

Johnson Jr has a new scenery in the state of Texas after switching high schools. The junior transferred from John Cooper High school in the Houston area, where he averaged 17.1 ppg and 4 assists to Plano West (TX) High. “I’ve gone to private school all of my life, so I wanted something new,” he said.

Switching from private school to public school would not have taken place if the educational importance was not the focal point. “My mom was not going to let me come to a different school if they didn’t have a good education,” he said. Avery Jr wasn’t nervous when he switched schools either and has a lay of the land. “It’s not that big of a transition,” he said.

“I’ve lived here kind of going back and forth visiting my dad; I’m familiar with the city, I have some friends here, I’m excited.”

Growing up, Johnson Jr watched his father, Avery Johnson Sr succeed in the NBA most notably as a member of the San Antonio Spurs. “At a young age he started developing a love for the game,” his father told SLAM by phone. “But Avery Junior is also a pretty accomplished tennis player.”

Being a former NBA player’s kid has its advantages and disadvantages. People see the name Avery Johnson on a scouting report and already expect a level of excellence because of who his father is. Johnson Jr embraces it: “It’s always pressure because we have the same name, people expect me to play as good as him or better,” said Avery Jr.

“A lot of times you may have a misconception about a kid that might come from a well-to-do family; not Avery Johnson, Avery Johnson is tough,” said Pospichal.

Johnson Jr has been around some talented players and has gotten some good advice on how to be successful. He credits former Net and current Celtic MarShon Brooks for some of the best advice he’s received. “MarShon Brooks used to tell me to work on the stuff you’re good at to be really good at it,” he said.

As the starting point guard of Plano West, perhaps Johnson Jr will implement some of that advice Brooks gave him. He’s got high expectations for this year’s team with high school basketball season slightly over a month away. “At Plano West I expect us to go deep into the playoffs,” he said. “We’ve all played together so we can contend for states.”

Johnson has recruiting interest from Arizona State, LIU-Brooklyn, Southern Mississippi, SMU, St. Louis, Santa Clara, Rutgers, LaSalle and Bucknell. With high interest from LSU and Baylor, the recruiting process has been kind to him. “He’ll sign a nice division one scholarship,” said Pospichal.

The high school junior is also looking to extend his relationship with basketball post-college as well. “If I can’t make it to the NBA, I’ll try to play overseas,” he said. “After I play overseas I’ll probably get a basketball job in the NBA—a GM or coaching.”

“My job will be something in basketball,” he added.

So who’s better at basketball? Avery, Sr. or Avery, Jr? Well, it depends on who you ask.

“I think we’re different players because I can shoot better than him,” joked Avery Jr.

His dad was a bit more diplomatic: “If I had his three point shot I maybe would have been a lottery pick,” said Johnson Sr.

Brandon Robinson is a digital journalist who covers sports and pop culture for SLAM, TD DAILY, VIBE, Max Preps, Da Laughing Barrel and Regal Radio. He is also a lecturer at NJIT in Newark, NJ. You can follow him on Twitter @ScoopB and see more of his work here.