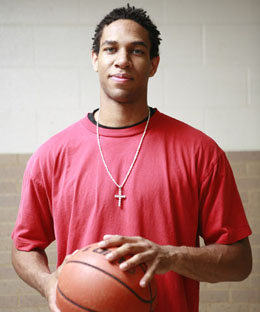 During the month of August, there was a group of young Americans that went far from their homes to play some ball. Except this group didn’t have LeBron or Kobe, and it most definitely was not coached by Mike Krzyzewski. The group I speak of – a select team of high schoolers Nike hand-picked – was showcasing their talents in Brazil and being led by Xavier Henry (pictured below; you all should recognize arguably the best high schooler in the country from his role as the SLAM diarist), Avery Bradley, Keith Gallon and a slew of other blue-chippers that are sure to be labeled “diaper dandies” in the winters to come by basketball land’s favorite shiny head.

The trip, which had the young men first in Belo Horizante, Brazil from August 15th-22nd, was very much inspired by a similar Nike-sponsored trip two summers prior which sent those players (most of whom are already in the league or in major D1 programs) to France for a week. Nike Basketball, which keeps a keen eye for young talent, chose current employee and former prep coach Raphael Chillious to school the team along with our man Alan Stein as the team’s trainer. Stein, who works frequently with Nike as a speaker at camps as a fitness and basketball training guru, spoke about going to a country where much of the country would try footing a basketball “upper 90” as opposed to tossing in a lay-up.

“There is no question at all that soccer is still the main sport there. Having said that, basketball is growing, there is a lot of interest there,” says Stein. “We were treated like rock stars wherever we went, I don’t think the people knew who we were, but it was still really cool to be treated like that. I mean people were even asking me for my autograph.”

However, as Stein claims adamantly, the talent level in Brazil is not a representation of how many people play the sport. Despite the fact that the team went 4-0 while down in the Amazon, winning all of the games handily, Stein promised that if the best players from each of the four teams played together they would have quite the squad and to see a few of them playing in the states sooner rather than later.

While the exploration of Brazil was undoubtedly premised on basketball, there is no question that there was more to it than just playing some local teams. Nike, along with the NBA, sees other countries – especially ones with massive populations like China and Brazil – as perfect opportunities to market the game according to Stein. In addition to that, the group went to two different orphanages in different parts of the country to spend time with the kids. Despite the language barrier, Stein said this was the most memorable part of the week for both him and the players.

“Going to those places was nothing short of amazing. I mean, to see these kids who have gone through so much smiling ear-to-ear even though we couldn’t speak their language…was awesome. I think both sides got a lot out of that experience; the love was there.”

Besides the orphanages, the squad toured the country a bit, highlighted by a trip to Sau Paulo where they were welcomed by Cavs’ forward Anderson Varejao, who showed the guys around his 21 million person town.

After a tour of the local sights, taking in a professional soccer game, and playing a morning game, it was time for the team to head back to the States. After all, most of them had homeroom the following Monday.