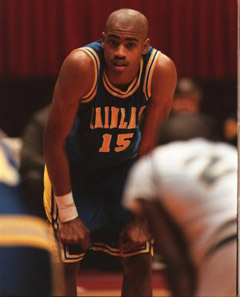 While pro hoopers tend to reach the peak of their abilities in the NBA, we take pride in the fact that we begin covering the world’s best players before they’re the world’s best players: when they’re in high school, still unknown to the majority of the basketball world. This week and next we’ll be looking back at the PUNKS features that introduced a variety of current NBAers to our faithful readers. Up first: the Vince Carter piece below, originally printed in SLAM 7 (September ’95).—Ed.

Forty-Five minutes west of Disney World and Shaq-Diesel is in Daytona Beach, Florida, a city that previously conjured up visions of Richard Petty’s 185 mph around the 500 speedway. That was then…this is now, and now the entire region has been mesmerized by a b-ball player dubbed “the smoothest swingman since Benny Goodman.” The future of basketball has arrived, folks. His name is Vincent Lamar Carter.

A 197 lb., silk-smooth off-guard, Carter, whose nickname is VI, is called upon to patrol both the perimeter and the post, which he does with Pippen-like efficiency and ferocity.

“It’s going to help me,” Carter says, concerning his time spent in the paint. “I now have post moves that will give me an advantage over most shooting guards.”

Carter, who wears No. 15, spent the 1994-95 season emerging as the 13th annual Mr. Basketball in Florida, as well as locking up honors in USA Today, Parade Magazine and McDonald’s first team All-American. VI also led the Mainland High Bucs’ to a No. 16 national ranking and the 6A state championship, scoring a triple-double—22 points, 16 rebounds and 10 blocks—in the title game.

One key to the Bucs’ title run, however, was a mid-season talk Mainland High’s Coach Charles Brinkerhoff had with a few of Carter’s teammates about not getting the pill in its star’s hands enough.

Coach Brinkerhoff simply gathered the individuals together and said, as quoted in the March 26, 1995 issue of the Daytona Beach News-Journal, “Let me introduce you to Vince Carter, he’s an All-American. All of you are good basketball players, but Vince Carter is a great player. If you think you are better than he is, you can go to another school and we’ll do an isolation against you, and after you get the Nike print off your forehead, then we’ll see how you rate.”

The Bucs’ got the hint, but instead of seeing an increase in Carter’s ppg, VI’s teammates found themselves on the receiving end of some wicked dishes.

“Vince is the best guard in his class,” says Bob Gibbons, a talent scout who rates Carter, Kevin Garnett, Ron Mercer and Robert Traylor as the top four seniors in the country. “He has the heart of a champion and he’s one of the most athletically gifted young men I’ve seen in the twenty years I’ve been covering high-school basketball. He’s a Jordanesque player with incredible leaping ability and hangtime.”

But hangtime isn’t the only similarity VI shares with MJ. Come this fall, Vince is taking his 19.5 ppg, 8.8 rpg, 4.1 apg and a 2.97 g.p.a. to the University of North Carolina. “I’m preparing myself beyond college,” Carter explains. “I dream about making the NBA. If I just wanted to be the star of the team, I probably would go to Florida or Florida State.” No offense to ‘Da Meat Hook or JC, but hey, it’s true!

Vince’s main focus is on fine-tuning his game at both ends of the court, and in choosing Dean Smith, he’s got the best mechanics in the business.

John Gabriel, VP of Basketball Operations-Player Personnel for the Orlando Magic agrees: “Vince’s choice of UNC will serve him well. UNC is a plus-four school, meaning that if I rate a player as the tenth best in the NBA Draft, being a Tar Heel automatically jumps him to number six. The plus-four rating is based upon the success of former Tar Heels in the NBA.” (Do the names Worthy and Perkins ring a bell?)

On the hardwood, Vince wants to be an extension of his coach. “I want to earn the confidence of my teammates,” he says, “so that in tight situations, if we need a big basket or a stop on ‘D’, they can count on me to step up and make things happen.”

He’s legit, and unlike Rush Limbaugh, Carter can go to the left as easily as he goes to the right. In a game against Socastee, in Myrtle Beach, he chipped a bone in his right wrist after being undercut on a breakaway jam. Unaware of the severity of the injury, VI returned. “I couldn’t use my right hand,” says Carter. “It was taped heavily and I felt a lot of pain, so I switched to my left. I went four of six at the line, and finished with 25 points. I even got a (southpaw) dunk.”

So, who is responsible for creating this monster of hoops? Is there a Dr. Frankenstein in the house? Yes, and this acorn didn’t fall far from the tree. It’s Vince’s uncle, Oliver Lee. Lee, a 1981 NBA draft pick of the Chicago Bulls who led Marquette University in scoring and rebounding in ‘81, got VI fixated on hoops at the age of two. Sixteen years later, Vince is posterizing local prep stars like 6-7 forward Tim James of Miami Northwestern.

One last piece of advice to Coach K, Bobby Cremins and the rest of the ACC: Don’t schedule UNC on January 26; it’s Vince’s birthday. So what, you say? Consider this: Last year instead of blowing out candles, Vince was busy torching Lake Mary High, posting 26 points, 16 rebounds, 8 assists and 17 blocks. Yes, 17 blocks. Yes, he’s a two. It was the worst M & M’er since the lickin’ Kareem Abdul-Jabbar got vs. Bruce Lee in The Game of Death.

If the proof is in the pudding, VI’s game could have Bill Cosby grinning ear to ear. 100 percent Jello, baby.