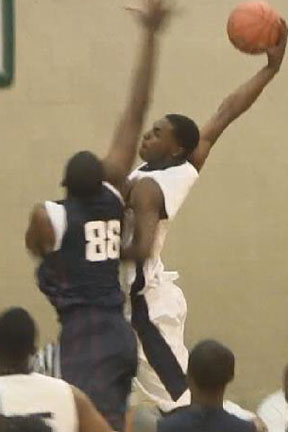 High school basketball is just starting off in different regions throughout the country, and in North Carolina, there was no better way to start than in the Queen City for the Charlotte Hoops Challenge. The third annual CHC was held at Waddell High School in Charlotte and brought a few national teams in to compete against the area’s finest, including Huntington Prep with the nation’s top player, Andrew Wiggins.

The weekend brought MJ in the house to watch his nephew make a kid fall on a crossover, Wiggins provide fans with a few filthy dunks, Caz’mon Hayes break the tourney’s scoring record, and Jason Boswell show that he can play anywhere on the floor. The event gave fans 15 games of basketball within a 36 hours, so while a hangover ensued, it was one that we’d welcome any time.

Here’s a look at a few of the guys who stood out over the weekend:

There weren’t any gaudy numbers, but Wiggins and Huntington Prep walked away with two victories and continued their path to a national championship. The swingman was swarmed by local and national media after the game hoping to get the latest tidbit of information on his recruitment, but in typical Wiggins fashion, he respectfully answered questions without divulging much information. It wasn’t the best weekend for the nation’s top player, but he’s such a special talent that he could go scoreless for the rest of the year and still have the top spot on lock.

Huntington Prep coach Rob Fulford had been in my ear for a minute about MGC, telling me he would be the next one. I saw glimpses in practice and knew that he was a can’t miss high-major guy but once real games began, I started to realize that I definitely undervalued him. “Teki” can score the ball in just about any way that you can imagine out of a sophomore wing. He’s got a deadly first step, can hit the three, can pull-up from in between, and can dunk on you at the rim. He’s ranked in the top-25 sophomores by a few services, and expect that to be close to the consensus by the time more people get a glimpse of this emerging wing.

The best point guard in NC lived up to his rep by giving his team two Ws in no quiet fashion. He’s got a certain type of Deron Williams deceptive athleticism to him. It appears that he has a bit of baby fat on him, yet Mitchell can blow by you or dunk on you at the blink of an eye. Wake Forest head coach Jeff Bzdelik was in the building to watch Shelton and just about the entire ACC has thrown their names in the race for his services.

X didn’t have the best weekend shooting the ball, but contributed in other areas to show that he’s one of the more complete shooting guards in the Class of 2013. The Canadian made some great decisions with the ball in his hands, rebounded the ball well, and converted a ton of no-look passes that froze the 2-3 zone that Huntington Prep goes up against on what seems like a nightly basis. Florida State front man Leonard Hamilton was in the building to check out his star recruit and left with a smile on his face.

There are nights when just about everything you put up finds the bottom of the net and Caz’mon Hayes had that on Saturday. He was drilling threes from deep, getting high off the floor on his pull-up J, and throwing down explosive dunks in transition en route to a record-setting 42 point showing. Already signed to Delaware, coach Monte Ross has room to breath by having this steal of a recruit locked up.

Holston exploded over the weekend, taking himself from a guy who mostly mid-majors knew about to a guy who high-majors need to know about. The athletic 2-guard had no problem getting to the cup with his lighting first step, showed some bounce when he got there, and had the ability to pull-up if he got caught in between. Troy is a guy who, if you don’t already know about him, remember you heard it here first.