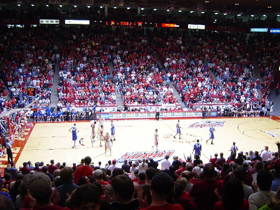 There are many great venues for taking in a college basketball game, some large and taunting; others intimate, deafening and intimidating. All of these buildings, both on campus and off, have their own charms, separating them from the “cookie-cutter” monstrosities that litter the NBA schedule. I have been fortunate enough to have been able to play, watch, and roam around some of the places that are included in this list. I have called on some friends of Cub Scouts to help with some of the other legendary places. As is the always the case in this space, I will not rank these with any numerical value, these are just the best! If you are near one of these establishments or happened to be traveling through one of these locales, by all means, find your way in and enjoy the show.

With the school’s history linked back to the game’s founding fathers alone, this building, named after former coach and Dr. Forest “Phog” Allen, is a national treasure. When you add in Wilt Chamberlain, JoJo White, the game’s creator, James Naismith founding the program, Danny Manning and the National Champs of 1986, Paul Pierce, Mario Chalmers and last year’s title grab, you have tradition you can’t ignore. The place itself is a bit unique, in that it is internally encircled with an indoor track (the floor seats pull back to enable an entire meet) and from there, the floor goes directly up toward a basic field house structure. The building is “highlighted” by the classic windows that encircle the building, often letting in the winter sun during an afternoon Big 12 tilt. The fan-base is rabid (yes, they do sleep out) loyal, and have produced umpteenth sell-outs in a row.

I was able to attend several games in my youth (early-mid 80s) when I had some family that lived in Lawrence and worked at the university. The locker rooms after games, the track on off-days were open to me when I was just eight years old. And you wonder why I love this game? I attend another game during the early 90s, but in a cruel twist of fate, my college team played at Allen the year after I graduated.

This venue is a borderline “can’t miss.” Any game, any time of the year, with any installment of the Jayhawk program, would be an amazing experience for any fan of the game.

You may think that you are stumbling into English department or the admissions office at Duke, when you round a corner to find an unassumingly looking trophy cases housing a couple national championship trophies. Continue further through the ordinary brown doors and out toward the light and you are suddenly in some place familiar. You have all seen the court for a home Duke game where the camera seems to be shooting from the roof, but this can’t be where they actually play the games. You walk into the inner-workings of a place that is not steel and plastic, rather wood and brass. You walk in, look up and see the numbers of Hurley, Leattner, Gminski, Hill, Dawkins, and you notice the rare hoops that hang down from the roof.

This must be where they play.

In truth, this really is where they play and it feels three times smaller when the building fills with the rabid student body making the court feel like the one you played on in elementary school.

While, a player at Brown during the mid-90s, I was able to play here twice in college against a couple of the aforementioned names. One quick story. It is two hours before the start of our game my sophomore year (the first time of two instances we played there) and it is one of the season’s first of the year, played over the Thanksgiving holiday. The students were home on break and we even joked about how this might be the worst attended Duke game ever. We walk out, not yet fully geared up in warm-ups and even full uniforms. I usually had my game shorts and a gray undershirt for this twenty minute shoot-around before we returned to the locker room. We come out predominately as a whole team, though not running out, and we are surprisingly greeted by a stacked student section that are all jumping around, shaking their keychains, chanting, “WARM UP THE BUS! WARM UP THE BUS!” The fact that this was a chant normally saved for when the game is in the final seconds and things seemed sealed away for the home team. I was finally here, and I wanted to turn right back around.

This is a classic environment that is often overlooked when the local UNM Lobos aren’t competitive or the building isn’t hosting an NCAA Tournament game. The charm starts with the entrance into the

arena which doesn’t look like much from the exterior because you enter basically into the complex’s rafters. You walk down to your seats and that trip back up for a bathroom break or a large popcorn reminds you that “The Q” is a mile above sea-level. If you are fortunate enough to play a game here you will be reminded, as well, by a large painted banner informing the individual about the altitude. You will have to make that trek again at halftime, as the locker rooms are also up that daunting slope.

The locals are big fans of college hoops and support the team even during the aforementioned “lean years.” The building has also housed several tournament games and is probably most known for being the site of the 1983 Final Four won by Jimmy Valvano and the Wolfpack of NC State.

This relic of a facility is the granddaddy of all shrines to the game, aptly dubbed the Cathedral of college basketball. As was mentioned in this week’s earlier column, the Palestra has been the host to thousands of games, predominately those pitting two of the city’s “Big Five.” While things have changed over the years and not all games (as was the tradition) between Villanova, St. Joseph’s, LaSalle, Temple, and Penn are now contested in this 81-year-old gem. It has always been the home for the Penn Quakers, which allowed myself into the building once a year for my team’s annual trip south from Providence.

As has also been mentioned in this space, I was a bit of a fan-favorite with the Penn students during my tenure. For some reason, there was this contingency that cheered for me during warm-ups, chanted for my coach to insert me into the game, and went ballistic whenever I did make the court. Penn was the dominate team in the league back then (going undefeated in the Ivies for three of my four years) and would have been a solid to upper-middle team in any “BCS” power conference in the nation. Local guys, Matt Maloney (kinda by way of South Jersey) and Jerome Allen were amazing and they had this place excited for any of their games along with the way to their eventual tourney bid.

If the Palestra is the “granddaddy” then MSG is the godfather. In its day, no place hosted more college basketball than “the World’s Most Famous Arena.” Back in the late-40s/early-50s, when the arena had a different location (there have been a few different incarnations,) New Yorkers would line up to catch the local college programs which were, at the time, some of the nation’s finest. In 1950, City College of New York (CCNY) won both the NCAA title and the NIT (the more prestigious of the two) before being immersed in the middle of a point-shaving scandal that involved several schools nationally and specifically three other local teams (Manhattan, Long Island University, and New York University.) Today, MSG hosts several preseason and postseason college tournaments, while St. John’s plays a large portion of their home schedule away from their Jamaica Queens confines. Still the arena’s jewel is the Big East Tournament which annually (and this year’s should be amazing) proves to be one of the best and most competitive conference tournaments.

In a discussion with our esteemed Editor-in-Chief, Ben Osborne (a lifelong New Yorker) about the difference between this place for a college game and a Knicks’ regular season game, Osborne vehemently prefers the amateur version. Amongst several mentions about how much he enjoys the pep band to the shitty pumped-in arena crap, Osborne continued about how a crowd for a good St. John’s game has this eclectic mix of grizzly old-timers (that would smoke if they still could) and excited college students. A fresh and appreciated change from the “stock broker” set that dominates the casual Knick crowd. Even when the attendance for the “Jimmy V Classic” is six thousand short of capacity, the atmosphere at the Garden “feels different” in Osborne’s mind.

Cub Scouts will return on Tuesday with another installment of “The Week That Was” and again next Friday with the second half of the arena bucket list. Included will be MacArthur Court (Oregon) Pauley Pavilion (UCLA) the Breslin Center (Michigan State) and a couple others, so be sure to check back!