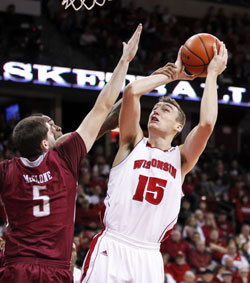 Due to holiday travel, a cluttered work schedule and a nasty little head cold, the Week in Review has been on hiatus of late. My apologies. But now, with the new year upon us, we turn our attention to the most wonderful two months in all of college sport: the conference schedule.

It’s time for the rivalry games, the big January showdowns between two ranked foes, the tough road tests in raucous gyms. This is when the good teams show their chops, and the average teams begin to fall by the wayside.

I can’t wait to watch the Big Ten, with all its tradition and pageantry. I wonder if anyone can challenge Arizona in the Pac-12. I anticipate an interesting go-round in the Big East, with new teams on the circuit and some old-school conference mainstays—like Villanova, for example—looking to make a name for themselves. What about that Big 12? Can Kansas rebound; can Oklahoma State run the table? And the ACC? Duke and Syracuse are the clear favorites, but North Carolina has proven it can play with anyone in the country.

My New Year’s resolution? Watch more college hoops—2014 is going to be one hell of an interesting year.

Anyhow, before we get too far ahead of ourselves, we do have some games to cover. Despite all that college football, there were still some early conference tilts on the docket this week, and here’s how a few of them played out.

The Pac-12 slate started with a bang on Thursday night as the Ducks flew out of Salt Lake City with a conference win and a still-unblemished 13-0 record. If not for one great play by Oregon’s Damyean Dotson, though, Utah would have probably scored a big-time win.

First, with the score tied at 62 at the very end of regulation, Utah’s Jordan Loveridge found himself wide open for a wing three-pointer that would’ve won the game for the Utes. It was a great look but Loveridge missed, and the game went to OT.

Utah built a 68-66 lead late in the extra frame, but Dotson shook his defender with a deft crossover and charged all the way to the rim, scoring on a reverse layup. Tie game. Then, with only a few seconds left, Dotson tipped a Utah pass to fellow Duck Dominic Artis, who alertly threw the ball ahead to a streaking Dotson. With 0.6 seconds on the clock, Dotson threw down a dunk and gave Oregon a two-point lead.

But the Utes had one more chance. Somehow most of the Ducks had run downcourt with Dotson, leaving no defenders on the other end. Loveridge had another clean look at the buzzer but—luckily for Oregon—missed again.

“That was unbelievable. “I never had a game-winner like that before,” Dotson told the Associated Press. “It’s the greatest feeling for me.”

Forward Richard Amardi scored 14 points for the Ducks, while Artis chipped in 12. Dotson finished with 11 points.

On the Utah side, Loveridge played a fine game despite the late misfires. He scored a game-high 21 points and secured five rebounds. After many seasons in the Pac 12 cellar, the Utes are looking to compete with the conference big boys this year. They certainly gave Oregon all it could handle.

Dana Altman’s Ducks, who went to the Sweet 16 last season, are off to their best start since 2006.

Yep, Arizona is still the Number 1 team in the land and still undefeated. In their Pac 12 opener Thursday, the Wildcats shellacked lowly Wachington State by 35 points, holding the Cougs to 20 percent shooting from the field (9-45). Center Kaleb Tarczewski scored a game-high 11 points for Arizona as the ‘Cats put this baby to bed early.

A New Year’s Day tilt, Mountain-West style. Xavier Thames went off in the second half, scoring 10 points in three minutes to lead the Aztecs to their first conference win of 2014. Colorado State had played catch-up for most of the game, but the Rams cut the deficit to six points before Thames took over. SDSU was in control after his jump-shooting outburst and closed out the 10-point victory.

You don’t hear much about SDSU, but Steve Fisher’s Aztecs have quietly turned themselves into a first-rate club. As of January 2 SDSU is 11-1 (1-0 MWC), with impressive non-con wins over Creighton, Marquette and Washington. The Aztecs’ only loss of the season thus far came against Arizona, 69-60, way back on Nov. 14.

Two days after Christmas SDSU beat a team called St. Katherine 118-35 (!) in what must have been a pseudo-exhibition. Then the Colorado State win on Wednesday, followed by a huge showdown at Kansas on Jan. 5. I suggest you tune in for that one. Thames is an elite distance shooter, and the SDSU frontcourt can dominate on the glass. The Jayhawks could very well have their hands full at the Phog.

“I think we can be pretty good,” Thames told the AP after the Colorado State win. “I think we can win the league, as long as we do the little things, stay focused and cut down on our turnovers. We’ve got a really good team.”

Behind 20 points from JayVaughn Pinkston, and after watching their lead slip away in the second half, Jay Wright’s Villanova Wildcats held off a tenacious Butler squad in overtime Tuesday at historic Hinkle Fieldhouse.

With 21 seconds left in the game and the Wildcats up by two, Butler’s Kellen Dunham knocked down a tough fade-away jump shot to knot the score at 66. Nova outscored Butler 10-7 in a hard-fought overtime, with Pinkston knocking down critical free throws to help seal the win. The Bulldogs had a shot, though—Butler rebounded a missed three-pointer and set up an inbounds play with five seconds left on the clock, down by one. But Dunham was well covered and couldn’t catch the inbounds pass.

The Boilermakers are always tough in West Lafayette, and undefeated Ohio State found itself in a dogfight on New Year’s Eve. But LaQuinton Ross’s monstrous double-double (25 points, 12 rebounds) was too much for the Boilermakers as OSU notched its first conference win.

Purdue was very much in this game until midway through the second half. That’s when the Buckeyes embarked on a couple of big runs, outscoring Purdue 16-2 during a rough stretch for the Boilermakers. But they didn’t throw in the towel, closing the deficit to five points with about a minute and a half remaining in the game. OSU is undefeated for a reason, though—Aaron Craft and his experienced cohorts didn’t buckle under the pressures of a road-game environment; they wrapped up the win.

AJ Hammons played a huge game for the Boilermakers, scoring 18 points and snagging 16 rebounds in 33 minutes of action.

Another Big Ten elite played a New Year’s Eve road game and came out on top: Rallying from a 47-40 halftime deficit, the Spartans dominated the second frame and ran over Penn State in Happy Valley. Branden Dawson and Keith Appling led MSU with 20 and 14 points, respectively.

MSU travels to Indiana this Saturday for another road test.

The Illini held on against the Hoosiers Tuesday in a great battle at Assembly Hall.

The game headed to overtime tied at 71. With about 20 second left Indiana’s Will Sheehey knocked down a pair of free throws to make the score 78-77, Illini. Then center Nnanna Egwu, who wasn’t having a good shooting night, got fouled and headed to the free-throw line. Egwu hit both shots to give Illinois a tenuous home win.

Guard Yogi Ferrell, who’s established himself as Indiana’s on-court leader this season, played a rugged 43 minutes of basketball, scoring a game-high 30 points and nearly willing his squad to victory. But Illinois played a tough game, too, led by guard Rayvonte Rice and his team-high 29 points. All told it was a tense, competitive game between two evenly matched sides.

“We’ve got some tough dudes,” Illini coach John Groce told reporters. “We take a lot of pride in that.”

The new-look Big East kicked off its conference schedule with a Tuesday night game between two winning programs. I always try to watch whenever Creighton plays ball, because I like this Jays team and I love their star senior, Doug McDermott, the second-highest scorer in the country.

Marquette never really got rolling in this one; Creighton was up 37-24 at the half and coasted to the finish line. The Golden Eagles were just 19-53 from the field and 2-12 from behind the arc. They’re still trying to find last season’s form. Creighton, on the other hand, fired off 62 shots from the field and made 24 of them (40.3 percent). If you play the Bluejays, you better guard the perimeter—Creighton was 13-35 from three-point territory and only shot four free throws the entire night.

McDermott led the way with 19 points and 7 rebounds. Marquette defended him well, but the versatile forward still contributes even when he’s hounded by double-teams. With elite footwork, a smooth stroke and some of the best off-ball movement you’ll ever see, McDermott is worth the price of admission. And his teammates aren’t bad, either.

The Hawkeyes secured an unspectacular conference win at home on Tuesday. Roy Devyn Marble scored 15 points and snared eight rebounds to lead Iowa over a very game Nebraska squad. Terran Petteway had 20 and 12 for the Huskers, who at one point were down by 20 points but came almost all the way back on a 20-5 run very late in the second half.

Iowa will have to play a much better game on Sunday if it hopes to beat No. 4 Wisconsin in Madison. Better free throw shooting would certainly help – the Hawkeyes were just 22-39 from the charity stripe.

The always-dangerous forward piled up 15 points, 8 rebounds and 4 assists during Wisconsin’s 76-49 Big Ten blowout of Northwestern on Thursday night. Dekker is the best offensive weapon on the No. 4 team in the country, largely because of his versatility—like many of Bo Ryan’s Badgers, he can pass the ball extremely well, crash for rebounds and score from a wide variety of spots on the floor, including behind the arc. Congrats Mr. Dekker, you are the Player of the Week. And your team is pretty solid, too.

Washington won its Pac 12 opener, but now the Huskies visit Tucson for a date with the Wildcats. Can they make a game of it?

Make no mistake, the Hoosier fans will be going crazy for this one. Anything can happen in Bloomington, even though on paper the Spartans are the better team.

Dayton is 11-3 and on its way to a fine season. Ole Miss has one of the best shooters in the country, Marshall Henderson, plus a solid 9-3 record. Worth watching just to see Henderson sling some three-balls from 40 feet.

Can the Jayhawks hold serve against a talented Aztecs squad?

The Ducks put their undefeated record on the line at Colorado. A good battle between two teams that should be in the running for the Pac 12 title.

The up-and-coming Hawkeyes play an exciting brand of ball. Wisconsin can play any brand it likes. Should be a great one in Madison. 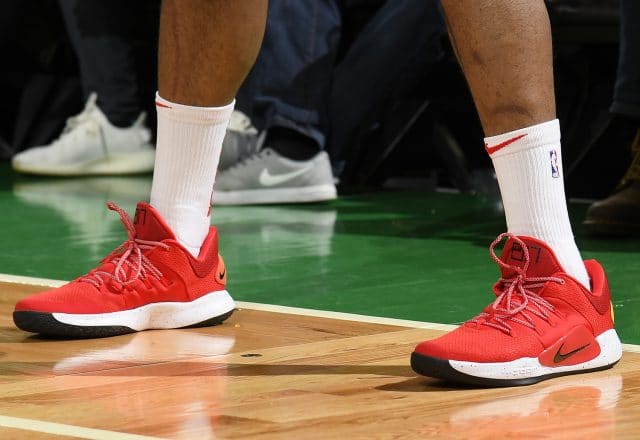