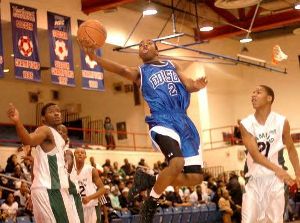 Thanks to all that checked out my first Crystal Ball piece, in which I attempted to foreshadow some of Isiah and the NY Knicks’ bonehead personel moves this season. To my surprise, one of the joke predictions (acquiring Allan Houston) came true. I’d like to thank the Knicks’ front office for making me the next Greg Anthony (get me a Hawaiian shirt like he wore in the ’92 brawl). With that said, I’d like to take a shot at the upcoming season in the PSAL, which I enjoy more than the NBA.

Anybody that’s familiar with NYC’s High School PSAL (Public Schools Athletic League) knows that trying to figure what’s going to go down mid-season a month before the first game is like being ready for a “Booger” Smith pass. With kids transferring between schools, being willing to hop 3 buses to get more looks, dealing with unexpected injuries and (some unfortunately) not handling business in the classroom, anything goes. Especially in October, a month before there’s any action. But based on what I know, I’ll try to lay it out. Update coming mid-season. From the league that brought us The self-proclaimed Best Point Guard in The NBA (I’m assuming we all must know who since he boldly declared it, haha), his cousin Sebastian Telfair, Bob Cousy, Pearl Washington, Rafer “Skip” Alston and many more of NYC’s best. Here are some schools and names to remember.

A longtime powerhouse in the Borough of Biggie, Boys High rings legendary since the Pearl Washington and Lenny Wilkens days. In recent years, they’ve become known for sending just about all of their players to some type of institute of higer learning. Last years team was nationally ranked and undefeated til mid-season, even being in Brooklyn’s tough AA league and playing an even tougher non-league schedule. They lost some key players (Wayne Allison, Zamal Nixon, Ricco Oliver and Kendall Cutler) to graduation, but a powerhouse team always finds a way to regenerate. And with Boys High it’s a team effort, so on any given day any given player will hurt you. You can start with seniors David Imes and Clayton Sterling returning. Guard Brandon Romain and smooth scoring forward Patrick Jackson are transferring in from Xaverian as well. You should see the Kangaroos still around come March Madness.

The most successful hoops program in PSAL history. People whisper, gossip and snicker about Lincoln coach Tiny Morton. About how he acquires the city’s top talent, even if they live in Baychester and still manage to go to the Coney Island powerhouse. Say what you will, he has a true PSAL dynasty dating back to the Sebastian Telfair days and one thing you’re guaranteed at Lincoln is exposure. They keep winning, but they’re not invincible. Kennedy beat them in 2005, it can be done. It may be tough for the next 2 years though, as Lance Stephenson is clearly the best player in the city with the hype to match. 26 ppg, 10 rpg and 6 apg. That’s difficult to stop. And with the triple teams on Lance, Lincoln always has an arsenal of role players to handle the load, plus he can play 4 or 5 positions. Look for talented and composed junior PG Darwin “Budda” Ellis to keep things focused. Many people are already predicting a Boys/Lincoln rematch at MSG for the finals, but I love a good upset. And while Lincoln’s Laker-like dynasty is admirable, it’s definitely time for new blood. Underdogs stand up!

4 short years ago, Edison wasn’t even on the radar. Even amongst the 2 schools it sits right next to (Jamaica High and Hillcrest High). They were so low key, in fact, they were moved to the less competitive A division when the PSAL re-aligned the divisions to make schedules based on prevoius year’s success. Edison is one reason that system failed. With the solid backcourt of Sophomore and Junior Stephon Hodges and star Allan Thomas, along with considerable size in the front court, Edison not only ran through the A league, they upset both Cardozo and Campus Magnet to win rights for the whole borough. No fluke. Although they’ve been moved up to the AA division (rightfully so), they’re still bent on avenging the A Division City Championship loss to Transit Tech last March. And with the backcourt returning and plenty of trees in the paint, Queens AA (as well as the rest of the city) have something to worry about.

Bob Cousy, Lloyd Daniels, 50 Cent. OK 50 didn’t pick up a ball in his brief stint at the Cambria Heights school formerly (and still colloquially) known as Jackson, but this school is one of the few in Queens that is consistently successful and draws a good percentage of it’s talent from its surrounding neighborhoods. The last few years have seen Campus run deep in the playoffs and at (or near) the top of the borough championships, so the Bulldogs are looking to continue the ritual. All around star Josiah Peay graduated, but a core of young players should be able to keep up the energy needed to stay in the Q-Boro’s top 5 squads. Mennon Chavis can score in bunches and Sacha Clarida has potential. If the big men can hold fort and senior point guard Nathaniel Wilson can put his experience and leadership to good use, they’ll be fine.

The Chiefs maintain a solid rep in the PSAL, but elude the plain sight of the media at times. Last year, Hofstra-bound star Nathaniel Lester officially brought them notoriety, but don’t count them out as a one man show about to crumble with his departure. There’s big potential in the backcourt with versatile combo guard Brian Cummings athletic scorer Yves Jules. How well they fare in the paint will determine their post-season fortunes, but this is a team that can never be counted out and the backcourt will be a pleasure to watch.

The Lincoln legacy of the 2000 decade will always have a glitch known as the 2005 Kennedy Knights. Being a Queens cat, I only get a good look at Kennedy in weekend tourneys and the playoffs. Kingsbridge is a super-haul with these gas prices and northbound Deegan congestion. But this solid program shocked everybody by beating Lincoln at MSG in 2005, boasting the top scorer in the city (Dwight Hardy) in 2006 and running deep in the playoffs last season. Kadeem Nicholas returns with scoring (23ppg), boardwork (9 rpg) and dimes (6.5 apg). That should help Kennedy maintain their spot as one of the best in the BX and still present come playoff time.

Like I said, getting uptown from the city limits of Southeast Queens is a task. But anybody in the know is aware that every year this uptown powerhouse (along with Kennedy and Wings in the BX) pull more local talent than any other public schools in that area. Josh “Jiggy” Watkins -one of the city’s best point guards last year- graduated. But strong rebounders Curtis Loving and Phyllip Jordan should ensure that they’ll be all over the ball and should have a presence in the playoffs after mid-winter break.

With Soul In The Hole star coach Kenny Jones assistant coaching, you can never go wrong in my book! Jeff has experienced a resurgence in hoops since being a non-factor for the past few decades. A young nucleus of Junior Keith Spellman (21ppg) and Sophomore Joel Wright (12ppg, 10 rpg) have a lot to do with that. Even after having to forefit a number of games last year due to an altercation with Robeson HS, Jeff showed character post-suspension and finished up the season strong, making the playoffs. Jeff should be in the mix with Lincoln, Boys and Canarsie for Brooklyn AA.

I enjoy watching Cardozo coach Ron Naclerio more than the game itself at times. There’s no coach as animated and entertaining, but jokes aside, the man knows hoops and his program is the most visible in Queens. He’s everywhere. I played a pickup game with my pops this summer and I could have sworn he was there! Similar to Lincoln, many of Queens’ top talents travel from opposite reaches of the borough to get the opportunity to be coached by him -he has NBA level respect in that area- and to play for the school that produced Rafer “Skip” Alston and Royal Ivey. Each year Cardozo dominates Queens -although they were upset by Edison last year- and cruises to the playoffs unfazed with a gaudy record. But that’s when the problems begin. With a roster often overflowing with star talent, many players struggle to find a groove in the rotation and the team underachieves. With the exception of the 2004 team that went to MSG to face Lincoln (Telfair’s swan song) and gave a good fight, Dozo begins to have trouble as the Quarter finals and Semis approach. This year Queens may be a little tougher to sweep if Edison and Campus get aggressive and rotation and chemistry are a must if Dozo are to compete with the Brooklyn and Uptown forces come playoff time. Look for talented senior guard Trinity Fields to have a solid season.

Watching Beach Channel at times, you may wonder how they’ve beaten teams that are way more talented. Other times, you’ll wonder if there’s another team in the city that overachieves as much as they do. Over the last 7 years the Rockaway Park school has quietly and consistently landed in the playoffs without much regular season press or fanfare. They haven’t had many high profile stars (save Iowa State’s Rashon Clark), the school is in a very remote location (unless you’re in Southeast Queens) and their high profile tournament exposure is limited. But in 2006 they sent waves through the PSAL after finishing .500 with a low seed and advancing to the Quarterfinals, upsetting teams in domino fashion. Last year, star forward Devon Saxon switched to point guard mid-season by necessity -the team hampered by injuries,academics- and worked with a bench full of second string underclassmen to come within a point of beating city powerhouse Cardozo. The best cinderella story of the season. The well coached Dolphins will execute and frustrate flashier and more athletic teams and use every second of the newly instated shot clock. A patient, Princeton-styled offense and hustle will find them a spot in the playoffs, even with Saxon gone and no visible star. Team ball wins.

Like I said, I don’t get uptown much but Fredrick Douglas Academy (FDA) up in Harlem are consistently making their presence felt in the playoffs and always play a solid game. Uptown is far, Staten is even further! Plus a ferry or $9 toll for good measure. You already know, I don’t see them until playoff time. But that doesn’t mean there are no forces to be reckoned with over there. Known as a football borough, both Curtis and Port Richmond came off of strong hoops seasons last year. East NY Transit Tech in BK lost a lot of seniors, but they defeated Edison for the A division champs so they will be in the public eye. The same can be said for Bronx powerhouse, Wings Academy. Coach Tony Bergeron and PG Josh Spivey left in 2006 and scorer Kidani Brutus one of the PSAL’s best guards, Jamie Harris, graduated in 2007. But like FDA, they can never be counted out. The same can be said for Lincoln’s Coney rival Grady. The Falcons are rebuilding after a sub .500 season, but the school still attracts some of the best in local talent and senior guard Peyton Mullings can shoot with the best of them.