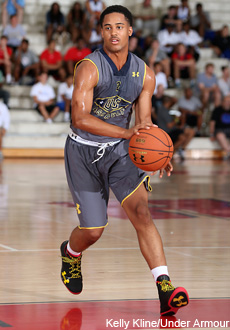 When Romelo Trimble gave Maryland his commitment back in December, any extra pressure of playing on the club circuit during the NCAA-certified live recruiting periods during the spring and summer in hopes of picking up offers was lifted.

But the chip on the smooth 6-3 combo guard’s shoulder remained firmly in place.

“A lot of people ask why I’m playing AAU even though I’m committed,” said Trimble, who attend Bishop O’Connell in Maryland. “But I don’t have that kind of mindset. I like to go after people who are ahead of me, or think they’re ahead of me, and shut people up. My teammates feel the same way so we’re on the same page, they’ll keep getting better too.”

During the Under Armour Summer Jam presented by NY2LA Sports July 17-21, Trimble and the DC Assault had plenty of chances to tangle with some of the country’s best club teams and nationally ranked players and the future Terrapin along with his squad outlasted everyone else in the loaded 17s division.

The Assault won all eight of their games in the tournament, and the impressive run was accentuated with a 67-62 come-from-behind victory over Ray Allen Select in the title game. Trimble, along with 6-0 guard Byron Hawkins (Good Counsel) scored 22 points apiece while big men Rashard Kelly, Donte Grantham and Chinanu Onuaku dominated the offensive and defensive glass to aid in the victory.

“This is the first time having our whole team together at a UA event,” Trimble said. “This meant a lot because we lost to Ray Allen Select back in Dallas when we didn’t have our real team.”

Kelly holds a pile of mid-major offers, as well as an offer from Boston College, but the 6-6 small forward played at a high level all tourney and should see some more high-majors start to pick up heavy interest. The 6-8 Grantham (some offers include Cincinnati, West Virginia, Miami, Clemson, Penn State) and 6-10 Onuaku (UConn, Maryland, Miami, Pitt, Rutgers, Seton Hall, Cincinnati, DePaul, and many more) were especially huge in the championship on the offensive glass giving the Assault second and third chances following a slow shooting start.

Trimble buried 6 first half three-pointers, and piled up 25 points in the first 16 minutes in a 58-44 semifinal win over the Iowa Barnstormers, but got off to a slow start against Ray Allen Select. He was thankful his bigs were able to keep his squad in the game until he started to heat up in the second half.

“My shot has always been my bread and butter since I’ve been playing,” Trimble said. “But that just came out of nowhere (against the Barnstormers). I always try to come out on fire during every big playoff game. In the championship game though, I was a little sluggish but my teammates picked it up. That showed me a lot because my teammates will have my back regardless, and pick it up too.

Ray Allen Select tallied impressive wins over stacked teams like the Illinois Wolves, Juice All-Stars (NY) and the Wisconsin Swing on its way to the championship.

While almost all of the teams that advanced to the sweet 16 and elite eight of the Summer Jam boasted at least one or two high-major recruits, Ray Allen Select wasn’t classically star-studded compared to many other teams in the field. But RAS’ run to the finals was certainly no fluke.

RAS also features 6-5 JuCo prospect, forward Ron Singleton, who had an impressive tournament doing the dirty work down low despite being undersized against many of his opponents. Ricky Landers and Devante Jackson, 6-8 big men, also provided Ray Allen Select with solid interior presence all tourney, while 6-6 wing Caleb Mortag continued to dunk on the heads of unsuspecting defenders.

LaChance went down swinging with a 39-point performance against DC Assault in the finals, which included knock-down threes, pull-ups off the dribble, floaters and drives through the lane. He was one of many at the tournament who were trying to prove they deserve high-major looks, and with his performance in the championship he got at least one more believer.

“He can shoot, and if you can shoot like that you can go anywhere,” Trimble said of LaChance.

Both squads will be at the Fab 48 in Las Vegas this week for the final live evaluation period, and with his full squad in tact, what are Trimble’s expectations out West?

“Win that one too,” he said with a confident grin.

Some other standouts from Sunday’s final four on the 15s level were the Houston Defenders’ Mongo Cornett (6-7 center/Westfield HS), Carsen Edwards (5-9 point guard/Atascosita HS) and JJ Caldwell (6-0 point guard/Cy-Woods HS). 6-5 shooting guard Deandre Hunter (Philly Pride/Friends Central HS) was one of the most intriguing players from the class of 2016, while his teammate and 5-10 combo Jaekwon Carlyle (Imohtep Charter) displayed a killer instinct scoring the ball and on defense.