Denzel Livingston puts himself and his UIW Cardinals on the Division I map. 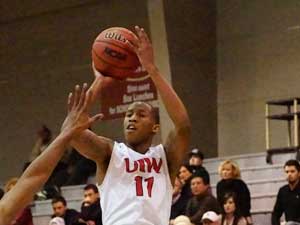 What motivates a basketball player to pursue a career in the sport? A hunger to be the best in the world? Fame? Proving all the doubters wrong? The love of the game?

For Denzel Livingston, a senior guard at the University of the Incarnate Word in Texas, the answer to the question is none of the above.

“Where I’m from, it was hard growing up. I have nieces and nephews, and I want them to have a better childhood than I did…that’s what basically motivates me to keep playing and keep doing what I’m doing today.”

And what Livingston does today…it isn’t easy.

His earliest memories of basketball date back to his elementary school days—fifth grade to be exact—when he played in his first game. “I really didn’t know what to do because it was my first official game, so I was real scared,” the Houston native said.

Rather than let those fears overtake him, Livingston conquered them right there and then, “My first layup gave me all the confidence in the world, and I haven’t been scared since.”

As a freshman at UIW, Livingston was 6-3 and 140 pounds according to one of his coaches, Bilal Batley. He had to eat a whole lot and spend much time in the gym to pack on the extra pounds of muscle to become the 6-4, 180-pounder he is today.

The added strength helped him lead his team in a bunch of per-game categories last season—points (20.3), blocks (1.4) and steals (2.5). He carried his UIW Cardinals to a 21-6 record, putting them on the map as they transitioned from the Lone Star Conference in DII to the Southland Conference in DI.

Livingston made sure that transition was noticed. In conference play, UIW finished with a 9-5 record. He hit the 1,000-point milestone as a junior, earned All-Defensive Team honors in the Southland Conference, and finished seventh nationally in steals per game.

This season, Denzel plans to show more of his favorite on-court plays—coming off a pick-and-roll, taking step-back jumpers, breaking dudes off the dribble—in an effort to make his and his school’s presence more widely recognized. Being named to the preseason All-Southland Conference First-Team last week to kick off his senior season wasn’t a bad way to start.

“I’ve been here for four years, and I enjoy putting this school on the map and enjoy getting a chance. I never thought that I could talk to SLAM…it brings recognition to the school and to myself—and I feel like that’s a big accomplishment.”

An accomplishment it is, and we’re positive it won’t be Denzel’s last.