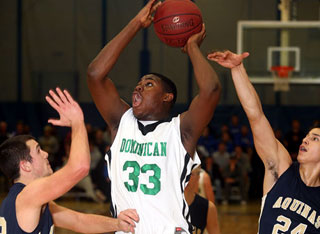 Diamond Stone rotated to block a shot, corralled the loose ball and snapped a three-quarter court outlet pass to a streaking teammate who finished with a layup on the other end in a matter of seconds.

The play encompassed a long list of reasons the sophomore from Dominican (WI) High has been ranked as the top prospect in 2015 by Scout, No. 2 by ESPN and No. 4 by Rivals.

“The thing that makes him special is his skill,” ESPN National Recruiting Analyst Reggie Rankin said. “He’s got excellent skill—he can score with his back to the basket, he can score facing the basket and he can make passes out of double teams when he draws multiple defenders. When you have a post player who can do those three things at 6-10, 250 pounds that puts him in a special category from a skill standpoint.”

The big man finished with 12 points, 10 rebounds, 4 assists and 6 blocks as his Young Legends cruised by the Milwaukee Spartans 62-41 on Sunday during the quarterfinals of the NY2LA Sports Invitational in Milwaukee. Stone & Co. then went onto beat Chicago Lockdown in the semis and DTA by 20 points in the Platinum Division championship.

He was named co-MVP of the 16s division by NY2LA Sports, and added yet another trophy to his collection as he has been part of Dominican’s last two Division 4 Wisconsin state championship squads. This past winter he averaged 17 points per game, 11.3 rebounds per game, was selected as a unanimous first-team Division 4 all-stater and put up 22 and 16 in the state title game.

His imposing size, great hands, defensive instincts and touch around the cup are impressive for any 16-year-old, but Stone displayed great passing ability to cutting teammates or spot shooters out of double teams.

As easy as it could have been for him to dominate the undersized defenders on the block, he was hungry to show off his developing floor game that includes his passing ability. For someone who has most likely grown up being able to score against his defender seemingly at will, sharing the ball for the sake of winning has never been an issue.

“It just came natural,” Stone said. “I love getting my teammates involved in everything I do. I’m a team player. I like to see them succeed too. I trust in them to make a good decision to shoot, pass or drive.”

Obviously with his size, skill, early national ranking and just about every college hoops powerhouse already keeping close tabs on him—the attention he draws on the court from the opposition is magnified.

He’s letting his AAU coach DeShawn Curtis and his parents handle the early stages of his recruiting process, and has embraced his opponents on the court who try and slow him down.

“It’s cool, but you have to stay humble because I have a target on my back and everybody is trying to come after me,” he said.

Barely able to drive, Stone still has plenty of time left in high school to sharpen his craft and Rankin thinks him squaring off against some of the country’s best in the USA Basketball program could help him take his game to another level.

“When he goes out to USA Basketball he’ll play against other elite players, and I think that will really help him,” Rankin said. “I know he’s already been out there at one point in time. The other thing is that he has to continue to stay hungry and not be satisfied. He has to get to the point where he just decides every game I play I’m going to dominate regardless of the competition.”

Stone cited DeMarcus Cousins as one of the players he enjoys watch play because, “he’s just a beast on the floor,” but admitted there are still plenty of areas he wants to improve besides beasting dudes in the paint.

The first aspect of Stone’s game he mentioned he wanted to improve was his perimeter defense, but is also hoping to expand his game offensively allowing him to step even farther away from the basket. With his game against the Milwaukee Spartans well in hand, he hoisted a three-pointer that bounced off the back rim. But he did sink a pair late in the Young Legends’ win over DTA.

“My dad and I have been working on my three,” Stone said. “I’m trying to get that along. Next will be ball-handling. We’re trying to go step by step.”

With a pair of state titles in his first two years of high school under his belt, his club team looking to take home more chips the remainder of the spring and summer and a consensus ranking among the best prospects in the Class of 2015 already—his step-by-step progression will be one watch.