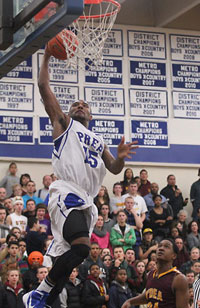 DJ Fenner and Quinton Stephens already have an offer list that almost any high school basketball player would love to have.

But both players are in the midst of turning their current lists of collegiate suitors into ones that includes perennial powerhouses.

Fenner had a productive tournament last weekend at the Under Armour Summer Jam presented by NY2LA Sports in Milwaukee, playing with the DC Assault. The 6-6, Class of 2013 shooting guard, plays his high school ball at Seattle Prep in Washington but grew up in Maryland.

It was then at the Mater Dei School where he attended as a youngster with current DC Assault standouts Nate Britt (North Carolina commit) and top-100 prospect Kris Jenkins.

“I started playing with them around 12-and-under and all the way up,” Fenner said. “I’ve moved back and forth a couple times and went to Gonzaga [High School] with Nate and Kris, but I really started on the circuit with them.”

Jenkins wasn’t in Milwaukee, but Fenner helped Britt and the rest of the DC Assault reach the elite eight on Sunday. Fenner already has a college-ready body to go with good athleticism, and scored plenty on mid-range jumpers and slashes to the basket over the course of his team’s six games in the five-day tournament.

His offer list includes USC, Washington, Washington State, Gonzaga, Nevada and Pepperdine but could grow especially after a 20-point performance in a blowout win on Thursday in which he only missed two shots.

“If you think about on an AAU team, everybody is really the stars of their respective high schools,” Fenner said. “If one person is hot you want to keep feeding them the ball and you want to make your teammate look good. It all starts with effort and if a dude is hot I want to make sure I keep giving him the ball and make him look good because I know he’d do the same for me.”

He wasn’t too concerned with who was watching him at the Summer Jam, though. He knows he can only play one way in order for him to be successful on the court.

“It’s just basketball to me,” Fenner said. “From when I was younger, until now and to college and beyond, it’s really just basketball. I know I play the best when I have fun, so as long as I’m having fun enjoying my last AAU season then everything will fall into place.”

Besides his offensive display, Fenner exerted himself defensively, often trying to lock down the opposition’s best wing player.

As impressive as he looked at times during the Summer Jam, Fenner thinks he is better in a more structured setting.

“In AAU, not a lot of people play defense,” Fenner said. “I know if I can go out there and play defense, I’m not only showing college coaches I can play defense but I’m working on my defensive skills. When you play defense, defense wins these games for us. I don’t care if it’s pickup ball, AAU or high school basketball. AAU is only preparing me for college.

“Honestly, I’m not really a big fan off AAU basketball simply because it’s not really a set system. It’s a lot of star athletes coming in and kind of runnin’ and gunnin’. I feel like I fit better in a system.”

Stephens, a 6-9 forward from Marist (GA) High, stood out for the Atlanta Xpress before his squad got knocked out of the playoffs by the Wisconsin Playmakers and Iowa State-bound shooting guard Matt Thomas who hit 9 three-pointers.

Like Fenner, Stephens wasn’t too concerned with which of the hundreds of colleges in attendance at Homestead High School in suburban Milwaukee were watching.

“I’m just trying to improve my game,” Stephens said. “I mean the offers will come and go, so I just try to play hard.”

“I’d say I enjoy playing the three the most because I can be on the inside and the outside,” Stephens said. “So I can post [my defender] up and cause some mismatch problems. I like to play on the post a lot. I like my mid-range game too, for the most part.”

The rangy forward runs the court like a guard and proved to be a capable slasher and shooter. He already holds offers from Georgia Tech, Georgia, Tennessee, Memphis, Miami (FL), Clemson and Auburn.

“I’ll start narrowing things down after this July period,” Stephens said. “We’ll see how things have settled down with like who has still offered me and who’s so-so. I want to try and make some official visits.

“I want a place where I can get a strong degree because the basketball isn’t going to dribble the whole time. I have to have something to do afterwards.”

He’s already taken unofficial visits to Tennessee, Auburn and Georgia Tech, with plans of an official to Clemson. But with one more live period left in July, and a senior season with Marist waiting in the wings, national recruiting analyst for Scout Evan Daniels thinks Stephens could be an attractive prospect for high-major programs.

“At his size, he has really good mobility, athleticism and skill,” said Daniels, who currently has Stephens ranked as the 21st best small forward in the country. “He’s been a little inconsistent at times, but he’s a guy with a lot of talent and raw ability. If he continues to improve at the rate he has, he has a chance to get those high-major offers and reel them in. I know he already has a couple, but he’s such an intriguing prospect because of his natural talent, size and skill.”

“He’s a bigger wing, and I think that’s part of the intriguing factor,” Daniels said. “I think he’s more of a combo forward than a true 3, but he has a lot of natural ability.”