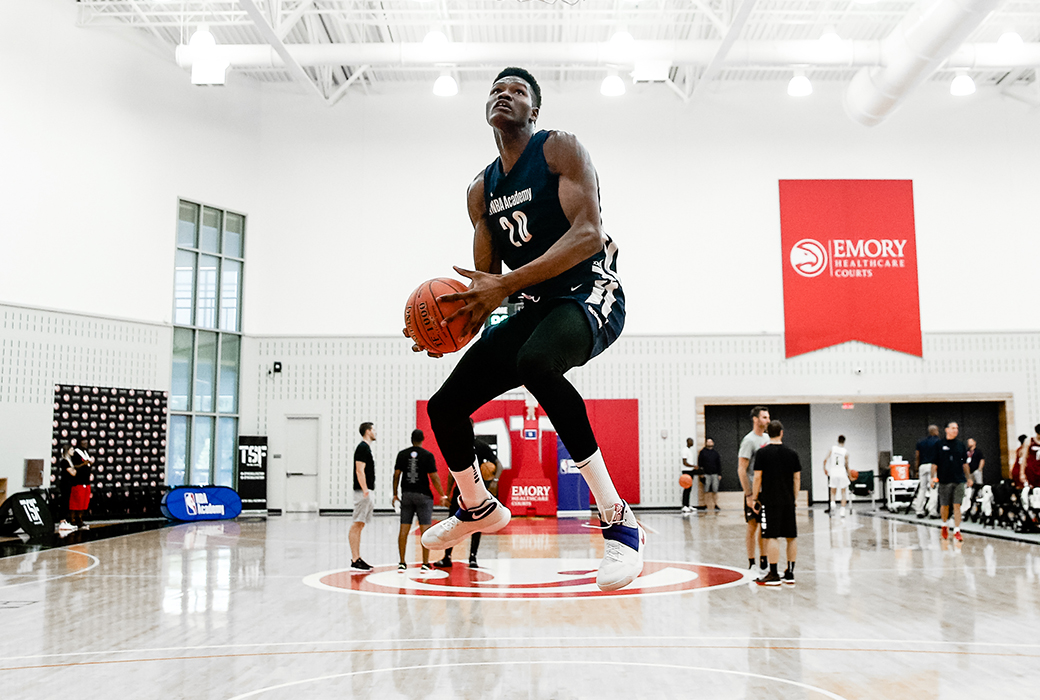 He planted his foot just behind the free-throw line, an inch or so farther than where Michael Jordan took off. His legs sprawled in the air. The ball cocked to the side of his head, ready for fire. He unleashed his elastic arms toward the rim and returned to the court in Senegal with a thud.

The entire crowd shot up. Fans recorded it on their phones. Teammates swarmed him. It looked like a game at the famous New York City streetball courts. “It’s over!” the DJ yelled six times. No one at the tournament was going to out-jump the 6-9, 215-pound, 15-year-old Efe Abogidi.

And then Abogidi vanished. The dunk was more than two years ago. The slow motion video still exists on the NBA’s Instagram, totaling nearly 2 million views. But, until recently, an online search of Abogidi told little of what happened to him. No high school stats. No more viral videos of him dunking. No articles updating his development. Just left in the abyss of the NBA’s 32,700 Instagram posts.

Efe Abogidi flew down on the fast break. He wasn’t planning to take off from the foul line, but he was surely going to dunk. Maybe a simple one-handed flush. Or maybe a crafty reverse slam. But as his head approached the basket, Abogidi felt a push in his back. He fell to the ground. It was his first ever major injury—a torn ACL.

That was 2017, just weeks after the free-throw line dunk and leaving Africa. He was playing in one of his first events for the NBA Global Academy in Canberra, Australia. And now he was injured, far from his home in Nigeria and out for nine months.

Abogidi was used to living away from his parents and five siblings, having initially attended the NBA Academy Africa in Senegal, one of six NBA Academies that stretch from India to Mexico to Shandong. The Academies are designed to train top international high school players from their selected areas—not only providing them with rigorous basketball schedules, but strength and conditioning coaches, medical training staffs and access to local schools.

“Three-hundred-sixty-degree holistic development, […] everything that allows them to become a successful basketball player, successful student and a successful human being later in life,” says Chris Ebersole, the NBA’s Director of International Basketball Operations.

In 2016, only two years after Abogidi started to play basketball, he won MVP at a camp in Lagos. That same year, the NBA was starting its Academy system. They took notice of the high-jumping kid.

“Anyone who was at that camp came away remembering that kid because he blows you away with once-in-a-lifetime explosiveness and athleticism,” says Ebersole.

Abogidi rode the eight-hour bus to join the first-year Academy in Senegal. A year later, he went viral for his free-throw line dunk.

The best players from the Academies around the world are ultimately funneled into the Global Academy, which is located at the renowned Australian Institute of Sport. Shortly after his dunk, Abogidi ended up in Australia too—only to tear his ACL.

“It was pretty [difficult]. […] Coming from Africa to another country, you just got hurt, you have to adapt to the weather, the place, the feeling,” Abogidi remembers.

In 2018, Marty Clarke, an Australian native and former Saint Mary’s College assistant, was hired as the new technical director at the Global Academy. Abogidi was still recovering from his first injury when Clarke arrived. Not long after, Abogidi endured a setback that would require surgery and keep him out for another year and a half. Clarke wondered if Abogidi would play again.

Abogidi had traveled across the world to play basketball. He had already sat out one year. And now he had to sit out another. He wondered why he stayed in Australia. His mental state, Clarke adds, was not “ideal.”

At first, the long days at the Academy, for 11 months of the year, didn’t help. Structured much like college, Abogidi’s days include individual morning workouts, classes, afternoon team practices and conditioning or lifting somewhere in between. The Academy emphasizes independence, as the students are expected to make their own appointments, do their own laundry and get to practice on time. But they don’t play games against college students. They play against grown men—professionals in the second division of the Australian National Basketball League. “It’s not an easy life,” says Clarke.

Abogidi was left to watch from the sidelines during practice. “In a team, you gather respect of your teammates from what you do on the floor,” Clarke says. “But he wasn’t on the floor, he couldn’t be around them.”

As Abogidi struggled to find motivation after the second surgery, his coaches, doctors, athlete welfare officer, physical trainer and strength and conditioning coach all sat down with Abogidi to fix some of the bad habits he had fallen into.

“It was a plan of rehab, taking charge, being on time, making his appointments and not relying on other people to be there for him,” Clarke says.

Abogidi bought in. His grades especially shot up. This year, he earned a 97.8 percent in US History and 96.8 percent in English. On the court, he lived in front of the shooting gun, developing a three-point shot that hadn’t been a part of his game before. Now “he smiles a lot,” says Clarke.

As Abogidi got healthier, Clarke started to point college coaches back in his direction. And in the spring of 2019, Abogidi was “surprised” to find a Facebook message from a coach at Washington State University.

“I hadn’t played for a while. That a college like Washington State would contact me and tell me, ‘We have interest in you,’ I was really excited about it and I wanted to take it to the next level,” remembers Abogidi.

The Washington State head coach, Kyle Smith, had recruited players from the Global Academy before. When he got the job at Washington State prior to the 2019-20 season, he asked Clarke for a few potential prospects to pursue. Smith was inheriting a program that had only made the NCAA Tournament three times in the past 30 years. Every single recruit counts in the effort to become relevant again.

When Clarke mentioned Abogidi as a potential longshot, Smith didn’t balk. He didn’t see someone who had been injured for two years. Instead, he saw a 6-10 “elite athlete” with a 7-4 wingspan and ripped arms—a “definite high-major talent” when healthy. (Because of his size and large hands, teammates call Abogidi “The Klaw” after Kawhi Leonard.) Smith saw someone who had moved across the world to play basketball—despite being injured for most of it.

And on top of that, Abogidi happened to have an uncle living in Pullman, the rural city of 30,000 people where Washington State is located. It all convinced Smith that Abogidi would not only contribute to the program, but stay committed to it. Still, it was hard not to forget Abogidi hadn’t played five-on-five basketball in two years.

This past July, Smith traveled down to the NBA Academy Games, an event that brings together all of the Academies to compete in a tournament. Abogidi still hadn’t returned to gameplay, though. (His first official, competitive five-on-five games take place on December 19-22 at the G-League Winter Showcase.) Instead, he spent the entire weekend on the bench. “I saw him clap a lot,” jokes Smith.

Smith did get to witness Abogidi in warm-ups, healthy enough to entertain the crowd with a few slams.

“He dunks with his head, so the knee didn’t seem to be bothered,” Smith says. When Abogidi did a recent vertical leap test at the Global Academy, he reached up to 43 inches.

But it was Abogidi’s newfound ability to shoot that really caught Smith’s eye. With awe, he remembers Abogidi hitting 20 free throws in a row like it was no big deal. At the Academy, Abogidi has made 97 of 100 free throws.

It impressed Smith enough to offer Abogidi a scholarship. Despite the injuries and frustration, Abogidi had been willing to redesign his game, to develop a shot, just in case he couldn’t jump again. Smith was sold.

The good news is, Abogidi can still jump.

Abogidi, the newly signed Washington State commit, will occasionally update his Instagram followers on his progress. It might not reach the NBA’s 42.5 million followers, but his 2,430 will do. He keeps a folder of basketball-related workout videos on his page. The first, from 77 weeks ago, shows Abodigi nailing a three. His follow-through is long, natural and easy—like someone who has shot threes their entire life. There are more videos of him shooting jumpers. Pull-ups and step-backs.

Twenty-four weeks ago, the videos begin to change. The dunks start coming. In one clip, Abobigi throws down a one-handed alley-oop off a pick-and-roll.

In the next, he starts from the three-point line, plants both feet around the restricted area and pushes off his injured knee. The video switches to slow motion as he hangs in the air. He swings the ball in a circle, creating a 360-degree, windmill motion. Without much trouble, he hammers the ball through the basket so hard it sounds like thunder. He faces the camera, an almost shy smile spread across his face.

Some cheers are heard in the background. They’re not as loud as they were in Senegal, but they will do. He will hear them soon enough.