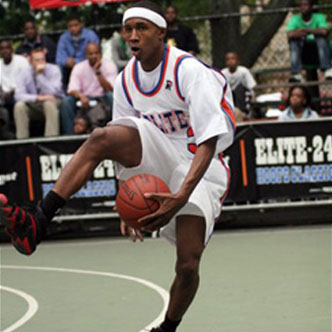 I made the trip from Philly to NYC on Friday to hit the second annual Boost Mobile Elite 24 Hoops Classic at fabled Rucker Park in Harlem to see some of the nation’s best high school ballplayers. I had to set aside any hopes of defense and team basketball going into the game, but I wasn’t disappointed with the displays of athleticism and skills of the youngsters who played. Below I’ll break down the nights of all the participants, but pick up the new issue of PUNKS this fall for the game story, written by my man Khalid Salaam.

Luke Babbitt, 6-8 combo forward, Galena (NV), 2008, committed to Nevada: Always quietly effective, the versatile Babbitt blended in nicely with his flashier teammates. His pure J, transition ability and ball skills for his size will make him a killer at the mid-major level and a hero in his home state.

DeMar Derozan, 6-6 wing, Compton (CA), 2008, committed to USC: One of the most athletic players in the nation, Derozan rose above the crowd for several impressive finishes. Efficient with the ball and a terror in transition, his head was at rim level for many of his drop-in layups—which disappointed the crowd; maybe his hands were hurt—and flushes.

Devin Ebanks, 6-9 wing, St. Thomas More (CT), 2008, committed to Indiana: A skilled, oversized wing in the Durant/McGrady mold, Ebanks’ smooth jaunts to the rack were remarkable. Combine that with his outside J and the Queens native had a more than respectable outing.

Tyreke Evans, 6-5 combo guard, American Christian (PA), 2008: With Baron Davis coaching him, “Too Easy” proved worthy of his nickname, as he shook any defender willing to D him up for countless wide-open layups. Always stone-faced, Evans’ handle made knifing through the lane and getting to the bucket seem as easy as breathing oxygen.

Xavier Henry, 6-6 wing, Putnam City (OK), 2009: People need to kill the Kobe comparisons for now, but Henry’s size, skills and offensive ability are mature beyond his years. A physical scorer who can hit the J and get to the rack whenever he wants, the underclassman’s game is probably better for more of a half-court affair.

Brandon Jennings, 6-1 point guard, Oak Hill (VA), 2008, committed to Arizona: Given the nickname “The Takeover,” Jennings was at his creative finest in the ballgame. Dimes from all angles, dunks on the break, treys from deep, sick dribble moves and even a quick “Chicken Noodle Soup” dance were all brought out of his repertoire.

Kevin Jones, 6-8 power forward, Mount Vernon (NY), 2008: When Jones is more of an offensive focal point for his team, he’s a post-up scorer who can dominate on the glass. In this game, however, the highly-recruited forward’s strengths were neutralized by the rapid pace.

Sylven Landesberg, 6-5 wing, Holy Cross (NY), 2008: A product of NYC’s strong Catholic league, the finesse scorer is another kid whose better off playing on a team that runs offensive sets for him. The lanky wing tried to go to work in iso situations, but simply wasn’t as dynamic as some other talents on hand.

John Riek, 7-1 center, Our Savior New American (NY), 2008: The Sudanese native was the subject of much scrutiny from onlookers and this game definitely wasn’t the best forum to judge his great potential. He has game-changing defensive ability and gets up and down the court much better than an average seven-footer, but all-star games are a guard’s paradise.

Samardo Samuels, 6-9 power forward, St. Benedict’s (NJ), 2008, committed to Louisville: Samuels has the best combination of power and agility in high school basketball right now—and it showed in this game. The native of Jamaica ran the floor and used his great hands, explosion and finishing ability very well to be the beneficiary of his teammates’ (namely Jennings) passes for easy hoops.

Howard “Trey” Thompkins, 6-9 power forward, Wesleyan (GA), 2008, committed to Georgia: Hurt for most of the summer circuit, the big-bodied post player was content to show off his outside game here, knocking down a few jumpers. That was probably a wise choice, seeing that if he gave up the rock when he got it on the perimeter, he probably wouldn’t have got it back.

Eloy Vargas, 6-11 center, American Heritage (FL), 2008: Another last-minute replacement (for Texas guard Willie Warren; I assume he made the trip with his high school and AAU teammate Kenny Boynton), Vargas didn’t get a lot of touches. The lanky and multi-faceted big man did get a chance to show off his skills on one occasion, on a fast break where he crossed over a defender and hit another one off with a nifty spin move.

Orange Team (Skip To My Lou)

Kenny Boynton, 6-2 combo guard, American Heritage (FL), 2009: An assassin of a scorer, Boynton had fewer opportunities than other players in the game, but converted most of them. Always in attack mode, his outside shot was also clicking in this one.

Ed Davis, 6-9 power forward, Benedictine (VA), 2008, committed to North Carolina: Long and skilled in the post and mid-range area, an all-star game is perhaps not the best place for the future Tar Heel to put his talents on display. Still, the lanky son of ex-pro Terry Davis made the best of a rough situation for any traditional post-up scorer.

Drew Gordon, 6-9 power forward, Archbishop Mitty (CA), 2008, committed to UCLA: This was my first time seeing Gordon play in person, so I won’t jump to any conclusions about the powerful athlete just yet. I will say he got the crowd pretty hype in the layup line.

Jrue Holiday, 6-4 combo guard, Campbell Hall (CA), 2008, committed to UCLA: A strong guard with great fundamentals, the mentality of a defensive stopper and a tendency to be almost too unselfish, Holiday is probably better off in more of a team setting. That said, he was pretty good in this contest, took the challenge of guarding both Evans and Jennings on D (his rip of BJ and subsequent double-pump reverse bang was a highlight) and was an effective scorer.

Noel Johnson, 6-7 wing, Fayetteville (GA), 2009: With his father “Cheese,” an NYC legend and former Wichita State star (as well as SLAM Managing Editor Susan Price’s phone buddy) in attendance, the kid from GA was probably a little disappointed with his performance. This game was no place for a polished mid-range scorer, however, and after seeing him play throughout the summer, I know he’s capable of lighting it up in the right situation.

B.J. Mullens, 7-1 center, Canal Winchester (OH), 2008, committed to Ohio State: Mullens’ speed and hops paid off very well for the big fella, as he converted passes in transition for several powerful flushes. Unmatched as an athlete for a post player, his one-hand reverse follow-up bang was easily one of the game’s most memorable moments.

Delvon Roe, 6-8 combo forward, St. Edward (OH), 2008, committed to Michigan State: Another kid who looks better in more of a structured environment, the workhorse couldn’t really get his game going in such an up-and-down, guard-dominated atmosphere. Trust me, Roe will look much better when you see him suit up in the Big Ten.

LaQuinton Ross, 6-8 wing, Callaway (MS), 2011: Being the youngest player in the game, Ross certainly had the potential to stink it up among his high-profile elders, but I felt he acquitted himself quite nicely. He has great size and ball skills for a swingman, showed off a nice stroke and displayed both athleticism and a defensive mindset on a semi-spectacular block that was called a questionable goaltend.

Renardo Sidney, 6-10 power forward, Fairfax (CA), 2009: When he’s on top of his game, the hype is clearly deserved—unfortunately, this wasn’t one of those occasions. In fairness, he reportedly suffered an injury in Thursday’s practice, but his lack of effort and unwillingness to mix it up in his brief early tick was disappointing.

Lance Stephenson, 6-5 combo guard, Lincoln (NY), 2009: A truly dominating scorer, “Born Ready” went to work in this affair. His overpowering strength, yo-yo of a handle and outstanding shooting range is simply too much for any of his peers to handle—and his playmaking skills are coming along nicely.

Dexter Strickland, 6-3 combo guard, St. Patrick’s (NJ), 2009: Strickland is still developing into a true point guard, but in this game his skills off the ball were more on display. A ridiculous athlete with great bounce and length that allow him to play like a much bigger wing, the Jersey youngster impressed with his aerial acrobatics and smooth moves.

Kemba Walker, 6-0 point guard, Rice (NY), 2008, committed to Connecticut: Already coming into the game with the nickname “EZ Pass” from his summer-league exploits in his hometown, Walker was the most unselfish player on the court, with the exception of Jennings. His freaky dimes and refusal to back down on D, traits that helped him lead his Gauchos AAU team to several titles on the summer circuit, earned a lot of respect from the crowd.

Before I go, I want to shout out my homie Tamara Hughes, who did the stats for the game and went to Temple University with me. The park was packed, the atmosphere was crazy and except for the millions of bugs that rained down on spectators when the lights were turned on (if I catch Ebola or some kinda disease, I’m suing!), it was a well-run affair.

There were too many celebs, pseudo-celebs and people in the basketball community to mention, but I’ll try my best: Fat Joe, ex-Syracuse star Pearl Washington, NYC legend Steve Burtt Sr. (and probably Jr.), Seton Hall star Brian Laing, former St. John’s star Walter Berry, UCLA freshman Kevin Love, Georgetown guard Jessie Sapp were among the spectators, while Bobbito Garcia and Rucker hype man Hannibal handled mic duties, and DJ Enuff was on the wheels.
Tark the Shark and Rafer Alston coached the Orange/Skip To My Lou team, with assistance from Skip’s high school coach, Ron Naclerio of Cardozo, and Baron Davis and Dwayne “Tiny” Morton of Lincoln High School in New York coached the White/The Goat team, who won, 169-164 (told you there was no D). I won’t hit you with all the stats from the game, but Brandon Jennings had 19 points and an incredible 23 dimes, Tyreke Evans dropped 30, DeMar Derozan had 26 and Samardo Samuels had 21. For the losing squad, Lance Stephenson led them with a game-high 38, Jrue Holiday put up 24 and B.J. Mullens had 18.