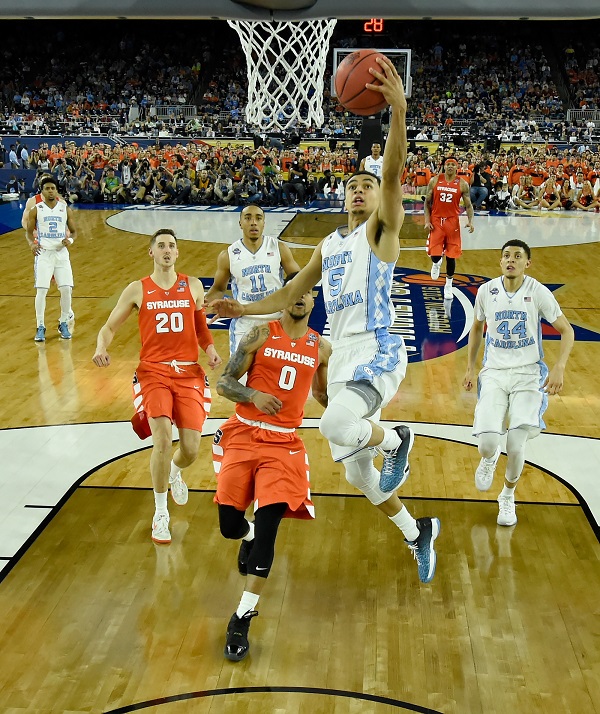 Not even Joe Biden could keep the Syracuse Orangemen from coming up short Saturday night. The Vice President proudly wore a Cuse badge for the semifinal, but he picked the wrong team to support this time around, as the North Carolina Tarheels punched their ticket to the championship game against Villanova with a 83-66 win Saturday night at NRG Stadium.

Early on, both teams played within themselves, but Brice Johnson got all 75,505 in attendance off their feet with a nasty, putback dunk on a missed three to make things even at 16 with 9:08 left in the first.

After Theo Pinson flashed a killer reverse layup and Isaiah Hicks slammed it home on a feed from Marcus Paige, the Heels led 39-27 at the half.

During halftime, the legendary Texas Western squad that surprised Kentucky in 1966 to win the title were brought out to center court and everyone stood up and cheered.

Trevor Cooney kept things interesting for the Orangemen, knocking down 4 of 8 from behind the arc, but every time he helped his team claw its way back into the game, North Carolina would stretch its lead back to double digits.

The Heels, who have beaten every team in this year’s tournament by at least 14 points, kept that streak alive tonight with a very balanced attack. Justin Jackson, Johnson and Marcus Paige finished with 16, 16 and 13 points, respectively.  Cooney led all scorers with 22 points for Cuse, who shot a paltry 4-13 from the charity strip. Can’t win a must win game like that.

Syracuse goes home and the Tarheels keep on dancin’.