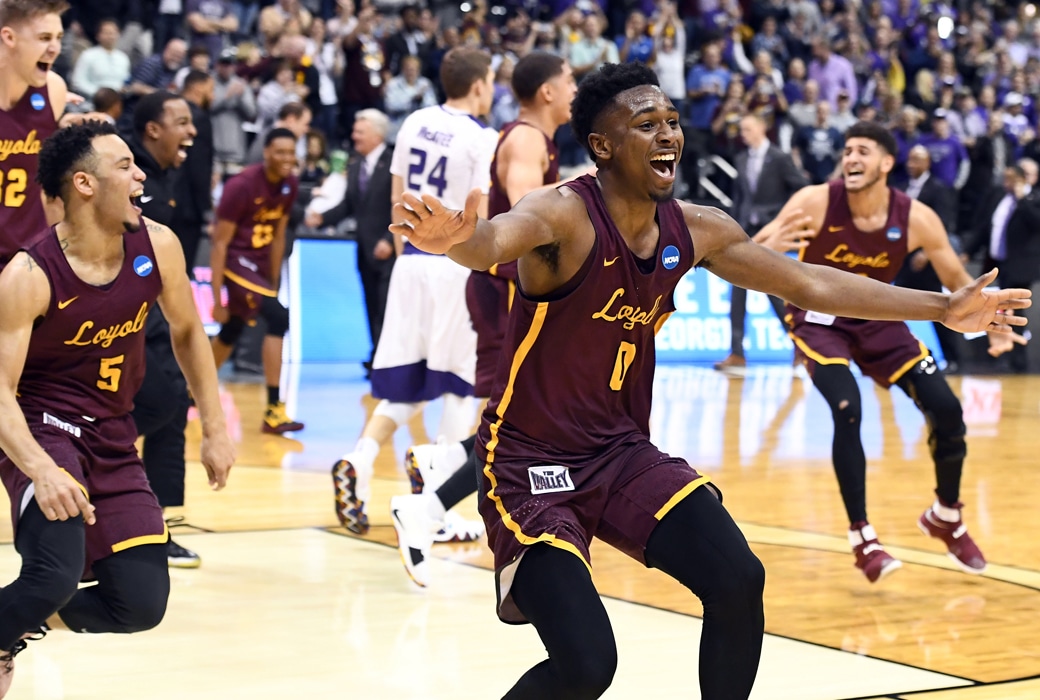 Little-known fact: Loyola-Chicago isn’t the only team in the Final Four without an NCAA basketball title. In fact, the Ramblers did win a National Championship 55 years ago, when they beat Cincinnati.

That victory and appearance in the Final Four was Loyola’s one and only until it defeated Kentucky last weekend to become the fourth No. 11 seed to get to the Final Four.

Since that big win in 1963, the Ramblers have only qualified for March Madness five times. And until last weekend, they hadn’t advanced past the Sweet 16.

It’s that kind of underdog story, along with three big-time programs advancing, that is helping to drive up prices for the Final Four and the National Championship, set for March 31-April 2 at San Antonio’s Alamodome.

According to data from TicketIQ.com, the average asking price for a Final Four ticket on the secondary market rose $72 between Monday and Tuesday, bringing the price to $1,108, tied for the second most expensive of the decade.

The price matches the cost of a 2015 ticket and is behind only last year, when prices settled at $1,343. Prices are up $800 since Selection Sunday.

But if you think that’s too much to spend to see your favorite team in San Antonio, PrimeSport.com has many great alternatives and inventory that isn’t available anywhere else. In fact, on the official NCAA Final Four ticket exchange, single-game tickets can be had for as little at $179.

And the company still has a handful of ticket packages, which include three games (both semifinals and the final), food, beverage and more, available starting at $1,000, making it more cost effective than buying on the secondary market.

If you’re ready to enjoy some basketball, ticket packages are still available.

PrimeSport can help fans take full advantage of the Final Four and National Championship, all in one place. The company has a variety of packages, some with hotel, many with additional experiences beyond the games, and all with the flexibility to allow fans to build their own experience and choose their own seats.

For fans who want to get away for a long weekend and enjoy some basketball, PrimeSport has two hotel options remaining. Whether you want to be in the city at the Wyndham or at a resort in Texas’ famed Hill Country, hotel-ticket packages include luxury accommodations, tickets to all three games, exclusive hospitality access and game-day transportation. The package including the Wyndham starts at $2,685, and the package at the La Cantera Resort starts at $2,415.

If you already have a place to stay for the weekend, PrimeSport has its “All-Session Ticket + VIP Hospitality” package available beginning at $1,000 for seats in the 300 sections. Fans can select their own seats, and the price rises according to seat selection.

As of Wednesday, there was limited availability throughout the Alamodome. Among the seats available are a handful near the floor at center court, for up to $9,075. No matter where the seat, fans who buy this package will have access to in-stadium hospitality located directly behind their seats.

PrimeSport packages give fans exclusive access to the NCAA’s VIP Experience, located at the San Antonio Convention Center. The event, open before games Saturday and Monday, and between games Saturday, is available for purchase through PrimeSport as a stand-alone item—without game tickets—for $575, as of Wednesday. Besides food and bar service, fans will be treated to live entertainment, interactive games and the chance to schmooze with former college basketball stars.

Both Loyola and Michigan can claim one national title. Though Loyola’s came 55 years ago, the Ramblers shouldn’t be underestimated—after all, they knocked off March Madness regular Kentucky in the South Regional Final to secure a spot in the Final Four.

Among Michigan’s clear advantages is strength of competition. Playing in the Big Ten, the Wolverines played tournament-level competition throughout the season, including No. 2-seed Purdue, who was knocked out in the Sweet 16, while Loyola plays in the Missouri Valley Conference (from which ex-NFL star receiver Jerry Rice hails) and was the only team from the conference to get into the tournament.

Michigan is one of four Big Ten teams that made the tournament.

No surprise that these two teams got to the Final Four. The Selection Committee made Virginia the overall No. 1 seed, but the Cavaliers got bounced in the first round (by UMBC, the first No. 16 seed ever to win). And No. 1 Xavier didn’t make it past the Round of 32, leaving two teams with a combined five national titles to carry the No. 1 torch.

Both teams pretty much have it all. Villanova has the highest-scoring offense (87 points per game) in the nation, but even ranked No. 29, Kansas isn’t too far behind, scoring an average of 81 ppg. That said, expect this to be a high-scoring affair, but it likely won’t be offense that determines the champion.

Neither team is a defensive machine, but Kansas has, at times struggled on the boards, and if Villanova can exploit that weakness, it would make the path to the title game all the easier.