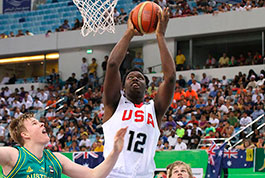 “Once a Spartan, always a Spartan.” That’s what five-star big man Caleb Swanigan tweeted out last month when he committed to Michigan State. But now just a few weeks later, his unofficial tenure with the Spartans seems to have come to an abrupt end before it even began. Reports began circulating this afternoon that the Fort Wayne, Indiana, native has backed off from his commitment to Tom Izzo and has decided to reopened his recruitment.

Since April 10, when Caleb Swanigan said he was committing to play next season at Michigan State, the Spartans have been waiting on a signed national letter of intent.

It appears the letter will not come, at least not to Michigan State.

Sources confirmed to The Detroit News on Thursday that Swanigan has decommitted from Michigan State, news that was first reported on Twitter by ESPN and Scout.com.

The two other schools that were in the thick of the recruiting when he first announced he would attend Michigan State were California and Purdue. Both will likely be back in the mix now that Swanigan has pulled away from the Spartans.

Messages to Swanigan’s guardian, Roosevelt Barnes, were not returned on Thursday.

“I really can’t talk about it, but we’re kind of going through a little bit of a thing, football’s been through it,” Izzo said on “The Drive with Jack Ebling” on 92.1-FM in Lansing. “So, nothing I’m worried about, I just can’t talk about it.”

The football issue Izzo was likely referring to was in 2014, when Southfield’s Malik McDowell committed to Michigan State but his mother, Joya Crowe, refused to sign the letter of intent. Months later, she finally did sign and McDowell enjoyed a solid freshman season.

Whether a similar issue exists with Swanigan, the 6-foot-8 center who lives in Fort Wayne with Barnes, is not known. He committed to Michigan State on April 10 and the top-10 prospect in the nation gave the Spartans a top-10 class that already includes Michigan’s 6-8 Mr. Basketball Deyonta Davis (Muskegon), 6-5 shooting guard Matt McQuaid (Duncanville, Texas) and 6-5 wing Kyle Ahrens (Versailles, Ohio).