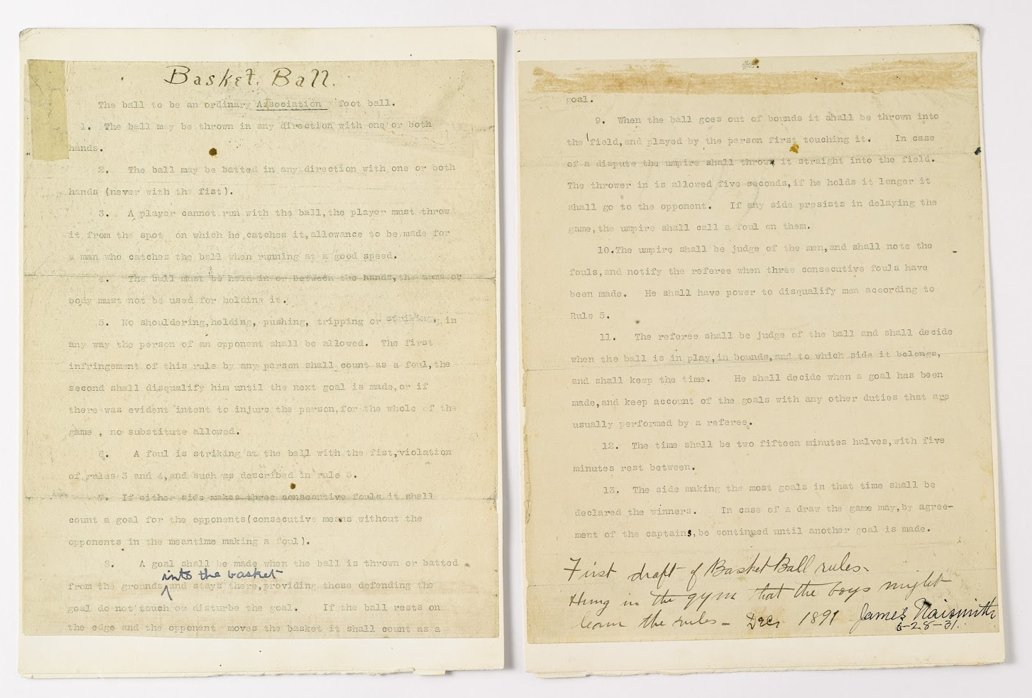 There really isn’t any major difference between Josh Swade, you or me. Swade, like most people, has a family and a job. He loves basketball, particularly college basketball and especially the Kansas Jayhawks. Swade is a native of Kansas, grew up going to Jayhawks basketball games, attended KU before transferring to CUNY and now lives and works for a production company in Manhattan. If you walked past Swade on the street, you wouldn’t stop and turn, he’d just be another face in the thousands you see in a regular day in Manhattan.

So why is SLAM running a feature on Swade? Well, as he chronicles in his new book The Holy Grail of Hoops, Swade led the crusade to buy Dr. James Naismith’s original rules of basketball and bring them to KU, where Naismith started the basketball program and is buried.

Ok, so maybe Swade isn’t the normal guy I made him out to be a second ago.

Swade’s new book is based on the ESPN 30 for 30 film he co-directed last October titled, There’s No Place Like Home, which will be released on August 1. In the book and the film, Swade, along with some help from KU graduate David Booth in the form of $4.3 million, tells the story of Kansas basketball, how it helped create programs at other major basketball schools (most notably Kentucky and North Carolina) and, of course, his quest to buy the rules.

Swade’s path from regular guy to a notable person in the rich basketball history at the University of Kansas is a unique one. Growing up, Swade’s father got season tickets to see the Jayhawks play at Phog Allen Fieldhouse, something Swade compares to, “going to Disneyland over and over again.” Swade, like any child who had a strong emotional investment to a team, talks about his powerful emotional connection to KU hoops.

“You invest so much in these players, and you felt like you knew them,” Swade said, “I think when you’re younger, that relationship is stronger…you really put your hopes and dreams on their shoulders. You’re thrilled when it works out and devastated when it doesn’t.”

When he moved to New York to attend CUNY, Swade says he actually became a bigger Kansas fan. The uniqueness of being a Kansas basketball fan in Manhattan was something that Swade viewed as a source of pride and uniqueness in a city with over eight million people.

Of course, a super fan like Swade understands what it means to be a Kansas basketball fan. The history, the tradition, everything. He knew of Dr. Naismith’s connection to the university and how he started the program at KU and inadvertantly helped programs like Kentucky and North Carolina grow. He admits that he has learned more as he has gone through the process of learning about the rules, but Swade says he knew, “more than your average Kansas fan, because I’m someone who’s into history and tradition.”

A brief tangent: the thing that makes basketball so unique is that it’s the one sport that a) has a person who is universally agreed upon as its creator and b) has a document that outlines the original rules to the game. No other major American sport—baseball, football, anything—has that. If James Naismith is the Founding Father of basketball, the rules are his Constitution. They are, quite possibly, the single most important document in sports history.

So when Swade heard that they were going to be auctioned off at Sotheby’s in New York, his reaction was the same reaction that many people would have when people find out something really old is still around, “I couldn’t believe that they were around still…it was just kind of like, I want to learn more about this.”

From the beginning, Swade admits that bringing the rules to Kansas would have been cool, but he admits that it’s not something he thought was viable. But after visiting Sotheby’s, learning about the auction and especially that the winners could come from anywhere, Swade became intrigued.

“Well if the winners can come from anywhere,” Swade said, “literally like a guy’s that wealthy and collects documents to the FIBA Hall of Fame in Spain to a Russian oligarch, anyone, why not Kansas?”

Of course, some people would (and did) argue that the rules should be at other places. At another school with a rich basketball tradition, like UCLA or Kentucky or Duke. Perhaps at the Basketball Hall of Fame in Springfield, Massachusetts, where Naismith invented the game at the nearby YMCA. Maybe even the Smithsonian in Washington, D.C.

To Swade, they had to be at the University of Kansas.

“Naismith coached and lived and spent 41 years in Lawrence, right? That kind of makes the argument of Kansas versus other schools. Kansas versus the Smithsonian and the Hall of Fame. You know, look, the Hall of Fame is obviously in Springfield, it’s where the game was invented, that would obviously be a tremendous place for the rules. They did have the rules for almost three decades. But really, I come back to the fact that anyone who has had the pleasure of going to a game at Allen Fieldhouse feels the electricity in that arena and, this might sound a bit ridiculous, but you can feel James Naismith. He is a part of those games 20 times a year. The Basketball Hall of Fame, while it is awesome, doesn’t have that feeling. You feel Naismith there. So why not have his rules?”

To accomplish this, Swade naturally needed money. Finding out about the sale a few weeks before it happened hurt, because it almost made it impossible for a fan-driven campaign to get off the ground and raise the necessary funds. Going to KU alumns in the NBA was nice, but again, the time required to get build relationships with players during the season and going through agents, advisors and the like would take far too long.

“It really came down to alumni with deep pockets,” Swade said, “and the whole chase is ‘how do I get in front of them?’ and ‘how do I convince them that this is really important?’”

Swade was able to convince one wealthy alum that this was worthwhile: David Booth, the co-founder and co-CEO of Dimensional Fund Advisors, a worldwide investment firm based out of Austin, Texas. Booth, whose net worth is a lot higher than yours or mine, was the man who eventually bought the rules when they were auctioned off.

However, it wasn’t as easy as “Swade contacts Booth, Booth likes the idea, Booth buys the rules,” there was plenty of adversity along the way, much of it from an unlikely source: The University of Kansas.

“Obviously, I’m just a guy off the street,” Swade said, “they can’t endorse someone that’s not acting on their behalf. And look, that makes sense to me, I get that. I think any university would be that way. And then, beyond that, there were some whispers and rumors circulating around those parts that kind of made them question various things about the rules and they had to make sure that their alumni weren’t doing something that wasn’t in their best interest.”

Luckily for Swade, he came across people who were able to convince Booth that the rules needed to be at Kansas: Mark and Louise Allen, the grandson and granddaughter-in-law of former Kansas coach Phog Allen.

“We couldn’t get to (Kansas coach) Bill Self,” Swade said, “because we were ranked number one in the country, it was the middle of the basketball season. It’s hard to just get to these guys. I don’t think everyone always realizes how difficult that is. And it wasn’t like we weren’t trying. But Mark Allen—and Mark Allen wasn’t someone who’s gonna bug the coach of the Jayhawks, that’s a delicate thing—but once it was like, ‘ok, does Self want the rules or is he kind of not into this?’ it was ‘we gotta find out, because the auction is tomorrow.’ Mark calls Self, Self calls Booth, Self says, ‘Are you kidding? It would be huge.’ Once Booth heard that, I think it made all the difference in the world. That was the difference maker.”

Booth ended up buying the rules for $4.3 million at the auction, where the price was ran up by David Rubenstein, the co-founder of the firm Carlyle Group and a graduate of Duke, who planned on winning the rules and donating them to his alma mater.

Currently, Booth has the rules in Dallas, Texas. The university has plans to house the rules at an $18 million addition to Allen Fieldhouse that will house the rules, tentatively set to be completed in 2014.

As for Swade, he’s just some guy walking around Manhattan every day, waiting for the Jayhawks to kick off their season on October 29, when Pitt State visits Lawrence for an exhibition. He is optimistic about this year’s Jayhawks, giddy about the fact that they added the top recruit in the country (Andrew Wiggins) and the #2 overall recruiting class.

“I can’t remember having this much raw, young talent,” Swade said, “obviously, we have a ton of young guys, so there’s probably going to be a growing phase. But man, it’s like, with Bill Self, you just reload. And we’ve never reloaded like this.

“The expectation of KU is to always be in the mix for a national championship,” Swade continued, “whether or not that’s realistic with this team remains to be seen, certainly at least a conference title.”

Like Swade says, whether or not the team is able to win a championship remains to be seen. If they are unable to, at least he can take pride in knowing he won his own personal championship in bringing the original rules of basketball where they belong: the University of Kansas.

As for The Holy Grail of Hoops, basketball fans still have a day or two to read into what happened and watch the movie before picking it up (luckily, the movie is available on YouTube, but can also be found on Netflix). Part Swade’s diary, part history of Kansas basketball, the book is, according to Cal Fussman of Esquire Magazine, “a tour-de-force of American sports fandom.” Even if you’re not a Kansas basketball fan, this is a must-read among all fans in the basketball community.

Two of the books main themes are religion and the concept of home. Swade, who is Jewish, says multiple times in the book that his mom gave him one religion (Judaism), while his father gave him another (Kansas basketball, with Allen Fieldhouse being referred to as basketball’s “Mecca”). According to Swade, “when you start to look at some of the iconic figures in the history of Kansas basketball, there’s these parallels you can make, so I explore that in the book in sort of a ‘tongue-in-cheek’ way.”

The concept of home is one very close to Swade, something he says is, “a difficult thing for people to articulate.” Swade mentions that, while he moved away from his home to come to New York, at his core, he’s a Kansan. For that reason, “a lot of what I was trying to do was for my home.”

The book, which features an afterword by Bill Self, can be ordered online today. As ESPN writer Wright Thompson says in the most succinct way possible, “Josh Swade is completely insane, which is why you should avoid him in public and why you should absolutely read his book.”

While Thompson is correct on that second part, he’s incorrect on the first: Swade isn’t insane. He’s just a basketball fan.