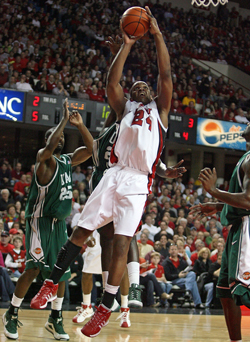 A little over two and a half years ago when David Stern decided to enact an age minimum for the NBA there was very little question that it would have a significant impact on the landscape of college basketball. With two full years of the rule in tow and a third building steam, the changes to the game have been great for the fan and less than perfect for coaches.

For the casual college observer, what hasn’t been great about the age limit? Think of all the stellar amateur careers that would have never been if not for Stern’s concern with youngsters getting themselves in too deep with the League: Greg Oden, Kevin Durant, Mike Conley, Brandon Wright, Spencer Hawes, Thaddeus Young, Derrick Rose, Michael Beasley, O.J. Mayo, Kevin Love, Eric Gordon, Jerryd Bayless…you get the point.

On the flip side, college coaches may be worse off now than during the days of the brightest prep stars taking their game to the biggest stage and bypassing higher learning all together. In the past when a blue chip recruit bolted for the NBA it was a loss for the school, but no one could hold it against a coach for losing out to the guarantee of millions of dollars. Now with the flurry of one-and-done superstars, coaches at major programs find themselves scrambling to continually replenish the talent well in order to remain competitive. Case and point: Ohio State’s “fall” from national runner up on ’07 to NIT champ in ’08. Thad Mata reaped the benefits of the greatest recruiting class in Buckeye history, but after a short-lived ride had to say goodbye to Oden, Conley and Daequan Cook.

So that brings us to the present day where the big question is, Where are the freshman? The Big 12 and Pac-10 have been captivated by newcomers each of the last two seasons. The Final Four has been chock full of bright eyed rookies in recent years. All-American lists have been flooded with players who just became old enough to go see an R-rated movie. Yet all around the country this season what are we privy to? Upper classmen and a smattering of sophomores are dominating the college game again. What an outrage!

That isn’t to say that the entire freshman class has been a let down—far from it. Georgetown’s Greg Monroe has quieted the critics who said he dogged it in high school. Willie Warren has done a stellar job pacing Oklahoma’s offense in its non-conference schedule and can lay early claim to being the top backcourt performer in his class. Of course, Al-Farouq Aminu can’t be overlooked either as the gangly forward is making his presence felt around the basket.

So why does it feel like this year’s crop of newbies is underachieving? For starters, there has been the lack of star power. Who is this year’s Kevin Durant? Where is the Michael Beasley or the Derrick Rose from this group? The answer is there is none. The three previously mentioned players all took the college game by storm and dominated from opening night all the way to the end of the season. In Rose’s case, that meant taking his phenomenal play to within a few seconds of hoisting a national championship trophy. This year, despite several freshman playing integral roles on teams vying for the top of

the polls, none of them is emerging as a force to be reckoned with.

North Carolina is stacked with future talent in Ed Davis, Larry Drew and the injured Tyler Zeller. Let’s get real though, that team belongs to two guys named Hansbrough and Lawson. Connecticut has gladly welcomed the play of speedster Kemba Walker, but A.J. Price and Hasheem Thabeet run the show in Stoors. In fact, of all the teams ranked in the Top 25 that welcomed highly recruited freshman to their programs this year, only Samardo Samuels of Louisville is leading his respective team in scoring.

Surely the fact that only a few freshmen have achieved early success can’t be the only reason the class of 2012 seems to be lagging, can it? In 2007, Sports Illustrated declared that season to be the “Year of the Freshman” despite the fact that Kevin Durant was the only truly dominating force that season (due in large part of Greg Oden missing part of the season). There is more to the equation. The players that were expected to perform well from the outset haven’t done so.

Greg Oden, Kevin Durant, Michael Beasley, Derrick Rose and O.J. Mayo were all big names before they ever step foot on a college campus. They lived up to their billing once they got on the court. This year, players like Demar DeRozan, B.J. Mullens and Jrue Holiday who were expected to be the next crop of great freshman, have largely disappointed. DeRozan’s highlight real athleticism hasn’t translated into production, Mullens has been taking baby steps for OSU and Holiday has yet to show the ability that made him arguably the best prospect out west last year.

When the marquee names aren’t performing, it seems to drag everyone else down as well. Has anyone noticed that Seth Curry (aka Baby Steph) has quietly been dropping nearly 20 points per game for Liberty? How about the highest scoring freshman in the ACC; no one would guess that it’s Virginia’s Sylven Landesberg. Maybe we’re just spoiled; maybe we took the last two years for granted. Was it fair to expect a third straight season with a Big 12 freshman averaging better than 20 and 10 or another dynamic point guard (or three) to emerge this season? Probably not.

Believe it or not, this is how things are supposed to work in college basketball. Each year talented freshmen arrive on the scene and provide a solid boost to their respective schools and can emerge as viable weapons as the season progresses. Ultimately, though, the star power lies with the upperclassmen that have been there before, have more refined skills and a better understanding of the game. Ten, 20 maybe even 30 years from now, people will still be talking about the freshman class of 2008 as one of the greatest of all time. Basketball historians will still look at Kevin Durant’s 2007 campaign as one of the best ever compiled by a first year player.

So while it may have been nice to continue the trend of complete dominance by the new kids on the block, let’s not forget that we have been blessed to witness two of the greatest freshman classes of all time back-to-back. Now, like the rest of the country, we’ll just have to ride out the recession.