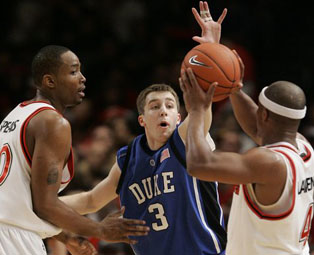 Slamonline’s roster of Game Notes reporters is always growing. Today we present to you our former XXL officemate Jack Erwin, who has written features for SLAM and now works at Complex.

Since there’s probably not a lot of interest in detailed Game Notes from a contest in which the home team finished the 1st half with more turnovers than points (11-10), herewith, a highly abbreviated (not to mention subjective) account of the epic February 25th St. John’s-Duke battle at Madison Square Garden.

-Duke comes out 30 minutes before the tip, and immediately begins an infantile passing drill where the team splits into two rows along the side of the free throw line and practice five and three-foot chest passes.

-The Duke assistants come out on the court three minutes before tip. Chris Collins and Steve Wojchiechowski still look like Secret Service agents for the Senior Class President.

-Anthem sung by “America’s Tenor” Daniel Rodriguez. Before it begins Duke coaches scan the rafters looking for the flag, to no avail. When the anthem begins, Coach K snaps to attention and puts his hand over his heart—his assistants do the same.

-Anthem interrupted twice by shouts of “Go St. John’s.” A sign of things to come.

-After the pregame team huddle, the Duke bench does their own separate huddle. Never taking off your warmup suit, congratulating teammates, holding hands during key free throws, etc. is apparently something that takes a little strategy.

– The early leader for next Duke assistant coach is freshman Nick Sutton, who sits on the bench yelling “Talk, Duke, talk” and doing the hand motion from the chicken dance which apparently is the Blue Devils’ (or perhaps just Sutton’s personal) signal for communicating on D.

-With 14:55 remaining in the half, Anthony Mason, Jr. hits a jumper from the elbow for St. John’s first points. Score Duke 12, SJU 2. Surprisingly, SJU will actually get this close again in the 2nd half.

-Despite the score, Duke’s half court offense is not exactly running smoothly. On consecutive possession, Paulus and Henderson unleash passes to no one. Still, SJU can’t convert on the giveaways.

-At the 11:28 TV timeout, it’s Duke 17-5. If not for a few turnovers and missed free throws, Duke might have ten more points. St. John’s dance squad does the t-shirt toss themselves. Not bad throwing arms for a bunch of girls. Good news in the waifish objectified women dept.: the St. John’s cheerleaders are not skipping any meals.

-Duke is still having trouble in its half court set. Larry Wright takes a Blue Devil turnover and begins a 1 on 3 fast break that ends with a weak floater that doesn’t hit.

-On consecutive possessions Lamont Hamilton and McRoberts drive on each other only to have their counterpart block the shot.

-8:20, McRoberts feeds Nelson for three, score 25-8. On the subsequent inbounds play, Duke traps the ball and SJU calls its third timeout. Out of the TO, Larry Wright called for traveling to once again put the Storm’s turnover-point tally at 9-8.

-A sign in the St. John’s student section: “Puke on Duke.” Cameron Crazies they ain’t.

-McRoberts and David McClure both go for the same rebound. McRoberts wrests it away from McClure and disgustedly mutters “Jesus Christ” as he turns up court. I rethink the Christian Laettner comparison.

-Lawrence drives into his own man (Hamilton), but is bailed out by a Zoubek foul. He’s in position to put SJU into double figures, but, alas, he misses the first free throw. He makes the second to trim the Duke lead to 25, 34-9.

-On the next Duke possession, Lawrence rips Nelson and is fouled. Somehow, the Johnnies are in the bonus. Lawrence hits the first shot and the crowd goes wild as SJU has broken double figures. Of course the momentum is immediately dashed—the Storm is called for a lane violation on the second shot (not entirely unforgivable though—Lawrence missed the shot anyway).

-Total conjecture, not even remotely based on any past statistical analysis: Coach K does not do well with very young teams. His autocratic style (see pregame passing drill) leads the underclassmen to overly rely on his guidance. On multiple occasions Paulus is bringing the ball upcourt looking to Krzyzewski for the play, only to have K yelling at someone else on the floor.

-Chasing a loose ball, Paulus trips into the crowd, but Coach K seems to see this as hustle and exhorts his bench.

-16:34, Eugene Lawrence is fouled under the basket. Aaron Spears gets tangled up with McRoberts, double technical. From across the court it doesn’t look like shit’s about to hit the fan, but apparently K sees something I don’t, and sprints to the SJU foul line. At this point I have two simultaneous fantasies (hard to do, but not impossible): 1) Krzyzewski ankle hugging Lamont Hamilton ala Jeff Van Gundy; 2) the Glee Club at the end of the Duke bench rushes the floor. Alas, neither comes to pass.

-11:43 Lawrence is closing guarding DeMarcus Nelson in front of the Duke bench, yelling “Watch the elbows, watch the elbows.” After Nelson passes Lawrence continues in his face and a double technical is called. No Duke lover me, but the T on Nelson (or Lawrence really) seems entirely undeserved.

-Duke’s Martynas Pocius attempts a wild behind the back pass (it’s not even gratuitous, more a last-second attempt to redeem a doomed drive) that’s intercepted. At the same time someone cattle prods Krzyzewski in the ass (or so it seems) and he sends Jon Scheyer in to replace Pocius.

-White dude behind Duke bench with a “C is for Crunk” t-shirt. O-k-k-kay!

-Crowd is into things for the first time all game, chanting “Defense.” SJU forces Nelson into an off-balance jumper from the free throw line, only to have McClure secure the offensive rebound. GAME OVER.

-At the next timeout, the Duke team manager/graduate assistant/hanger-on in a monkey suit in charge of keeping the hustle stats (I presume) is updating his tally when he thoughtfully takes his gum out of his mouth, sticks it to the edge of the court and wipes his hand on his pant leg. You can take the boy out of the sheltered, impossibly privileged, private school milieu, but you can’t take…

-With Gerald Henderson at the line, a fan from the end zone throws one of the free t-shirts and it lands beneath the hoop. Technical on the home team, party foul on the perpetrator who obviously can’t throw as far as a girl.

-The press conferences are notable only for the grilling the NY media gives the St. John’s players and coaches (“Were you embarrassed? Did the St. John’s family lose its cool today?”). That and Coach K backpedaling like Joseph Biden: “They must play a lot of zone in the Big East… Which is fine, one of my best friends…,” and this inane gem regarding his running onto the court during the Hamilton-McRoberts non-fight: “I’m Catholic, you might see me crossing myself when I come to bat…” Of course the assembled press eats it up like it actually makes sense.