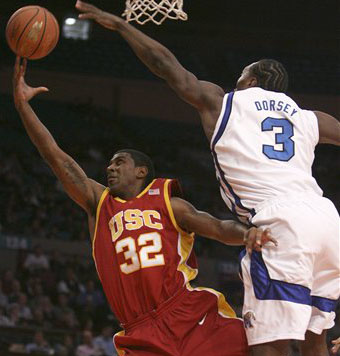 Dick Vitale’s probably rolling over in his grave. The nightcap of yesterday’s Jimmy V Classic doubleheader at the Garden pitted the no. 3 Memphis Tigers versus the no. 24 USC Trojans, and alls anyone wanted to talk about was the match-up of superfrosh guards, Derrick Rose and O.J. Mayo. That’s right Dick, even the college game is about matchups these days. And for a subplot, how about a match-up of NBA coaching washouts, John Calipari for UM and Tim Floyd for SC? (And the award for best spin in a press release goes to this couplet describing Floyd’s resume (emphasis added): “Floyd has an impressive track record in the collegiate ranks along with his NBA experience.” Those of you watching on ESPN last night know the four other former NBA helmsmen who are now back plying their trade in college. But do you know which of the six had the best (and worst) NBA coaching records? Read the full notes (or simply scroll to the bottom) and find out.

-There’s a palpable buzz in the building in anticipation of the Rose-Mayo match-up. Right now, Rose is projected as the top point guard in next year’s draft (so Ben tells me), with Mayo ranked in the latter portion of the first ten picks (insight again courtesy of Ben). Lo and behold, Irv Gotti’s got courtside seats, next to Uncle Wes and Maverick Carter (some guy named Ben points this out to me, maybe he oughta write these notes).

-Memphis executes an impressive set of windmill dunks in warm-ups.

-A Minute in, Mayo takes a rebound and makes a good feed to Davon Jefferson (another SC frosh projected to go in the ’08 first round), who promptly travels.

-Early on, both teams in man, with Mayo guarding Rose, and Memphis employing a tag team of Chris Douglas-Roberts and Antonio Anderson to mark Mayo. Maybe Calipari’s trying to conserve Rose’s energy on the defensive end? Although it soon becomes clear Rose’s energies aren’t being conserved to try to challenge Mayo off the dribble.

-Mayo scores SC’s first five points (two floaters in the lane and a free throw) and after SC takes a 7-2 lead, Calipari is forced to burn a timeout before the first official TO.

-Off a Taj Gibson miss, Rose starts a break, and whips a pass to Doneal Mack for a corner three, SC up 9-7. My initial impression is that Rose gives Memphis’s running game another gear.

-Rose not even thinking about penetrating against Mayo, but he’s consistently getting his teammates open looks, particularly for threes, including a very nice cross-court skip pass to Shawn Taggart. And the Tigers are consistently bricking the open treys (as befitting a team that’s shooting 35% from behind the arc on the season).

-SC is handling Memphis’s press pretty well (although the Tigers don’t get to use it UMch since they can’t sink a shot) with a combination of Daniel Hackett and Angelo Johnson running the point.

-Mayo’s first true highlight moment of the evening: After Johnson succumbs to UM’s press, O.J. immediately intercepts Douglas-Roberts’ outlet pass and throws a skipping stone of a bounce pass to Dwight Lewis for a three-point play.

-Late in the half UM’s Joey Dorsey begins to assert himself in the paint, blocking shots and grabbing offensive rebounds. And airballing free throws (or one at least).

-6 seconds left in the half, Mayo closes out the scoring with a seasoned spin move from the left elbow. SC up 29-24. Mayo finishes the half with 10 points on 4-9 shooting, with three boards and two assists. Rose is scoreless on 0-3 shooting with two rebounds and two dimes. Dickie V probably gloating somewhere.

-In the first minute and 12 seconds, SC commits turnovers on an up-and-down (Davon Jefferson) and a singularly graceless travel on a break (Taj Gibson).

-Memphis gets in the Keystone Kops act and the total turnovers reach six. Before the 18-minute mark.

-Rose finally showing something, knocks away an SC pass and saves to Willie Kemp for a Memphis break chance (squandered, but still).

-15:43, Rose challenges Mayo for maybe the first time, backing him down only to brick the turnaround j.

-14:33, for at least the fourth time, SC scores off a baseline inbounds play. Advantage Floyd.

-In a twenty-second span after the eight minute mark, Rose gets an offensive rebound and a putback, rebounds a Mayo miss and feeds Kemp to cut the SC margin to 46-45.

-Down 52-49 with two minutes to go, SC isolates Mayo on Rose out of a timeout. O.J. gets clear with a quick crossover, but can’t hit the floater in the lane over Memphis’s frontcourt.

-Up 54-53 with eight seconds left, Memphis’s Douglas-Roberts at line, misses front end of 1 and 1, promptly fouls Hackett…who hits 1 of 2 to send the game to overtime. 40 minutes, 108 combined points. Yikes.

-OT actually uglier than regulation. Mayo’s cold from the field and definitely not on the same page with his teammates. Rose hits a couple FTs, Douglas-Roberts rebounds his own miss (twice) and gets a putback. Mayo gets a meaningless bucket with 15 seconds left, but Memphis prevails 62-58.

-Both of these teams are going through growing pains, but this seems natural for December, not to mention squads that are trying to incorporate star freshman into the mix. Memphis, in particular, will be an interesting work in progress, as Rose is running a team that returned all five starters from an Elite Eight run a year ago. He barely looked for his own shot last night, and he’s going to have to do that some more for the Tigers to have a chance to be special. But with Douglas-Roberts on the wing and Dorsey doing the dirty work, the parts are there to do some March damage.

-It often seemed like SC had two modes of operation last night: all O.J., or hold the Mayo. Their first three possessions of OT looked like this: 1) Mayo dribbles the ball for 15 seconds before a brick; 2) and 3) Mayo doesn’t touch the ball. Again, if they can somehow get an offensive flow, they have the parts (Jefferson and Gibson, in addition to Mayo) to at least be exciting.

-Kinda scary then (for Tiger and Trojan fans), that their seasons will come down to the in-game coaching strategies of Calipari and Floyd. Speaking of which, here’s the NBA winning percentages for those two and their fellow L refugee brethren: