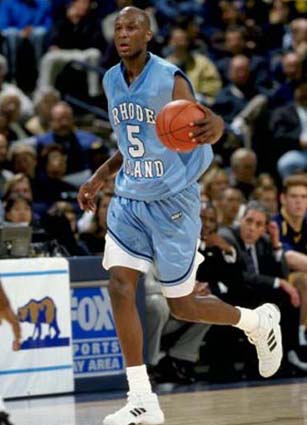 With college basketball season tipping off this week, we’ll be running a number of previously published features that documented a current NBA star during his NCAA come-up. First, we posted this Q+A with then Cal sophomore Jason Kidd. Up next, a Lamar Odom piece from SLAM 31 (January 1999), written right before he suited up for the University of Rhode Island after a tough few years.—Ed.

It really is. Read enough about Lamar Odom’s crazy two-year journey from Christ the King HS in Queens, NY, to the bucolic pastures of Kingston, RI, and you can’t help but think he personifies everything that has gone wrong with college basketball recruiting. All the hints and allegations. The pile of hangers-on and “advisors.” The shoe companies. AAU teams. You want to reform the cesspool? Make Odom the poster boy for change. He went to three different high schools in one year, for Pete’s sake. Bus drivers make fewer stops. When he finally chose a college—UNLV—he wasn’t allowed to attend classes there. Seems he was too hot to handle. Imagine that: Vegas didn’t want him. That place hasn’t turned down anybody since Bugsy Siegel was kicked out. So Odom came back East and landed at Rhode Island, where he failed to do the academic work necessary to get eligible for the second half of last season. Now he’s ready to play ball again. Give us a break.

Then you meet the man. Coiled behind a desk in the cramped office of URI assistant Jerry DeGregorio, Odom hardly resembles a human scandal. Dressed in athletic chic—black mock turtleneck, black sweats—with his head freshly shorn and buffed, Odom, you realize, is just another gifted young player who fell prey to the quick onset of fame. Another victim of society’s cult of the athlete , where grown-ups worship children, give them preferential treatment and then complain when they can’t handle the adulation. It doesn’t matter whether they have a family network strong enough to handle the onslaught; it’s coming. The formula is simple: Put the ball in the hoop and make new friends. Grow to be 6-10 and you can forget about schoolwork. Nobody cares whether you’re only 16. Here’s the key to the treasure chest. Have at it. Just remember, if you do something wrong, we’re gonna hammer you.

“Of course it was fun,” Odom says. “There were newspaper articles and media attention. You walk into a gym and everybody knows who you are. It was fun at first, but then it got a little out of hand. I didn’t handle it the best. You start not acting like yourself. You’re always worried about what everybody else has to say.”

Time seems to have done wonders for Odom. Now if only everybody else could grow up. In the two years since he began his senior year at CTK, Odom has grown from a star-struck, misguided child into a young man with a clear understanding of how to tell right from wrong. Of how athletes need to mature much more quickly than the rest of the world. “He was begging for discipline,” says URI coach Jim Harrick. “He was starving for us to step in and tell him what we wanted him to do and then make him do it.” Odom has done it, and the results are encouraging. He is less trusting. He is more responsible. He doesn’t run and hide when things get tough. And did we mention he’s ready to play some ball? Really ready.

You can bet Harrick’s glad about that. Adding Odom to a team that was kept out of last year’s Final Four only by a crippling case of brain lock (or a bad official’s call, depending on whom you believe) should soften the losses of star guards Tyson Wheeler and Cuttino Mobley considerably. If we are to believe the advance reviews—a dangerous thing, given the breathless ravings of many recruiting analysts—Odom is a panther capable of playing all five positions simultaneously while also discovering the a cure for the common cold. Harrick will no doubt require less of Odom, at least at the season’s outset, but it’s clear the Rams have themselves a one-of-a-kind talent, the type of player who has never graced their program before. Talk all you want about the school’s proud past, but Odom puts the Rams in a different neighborhood than ever before and gives them real hope they might join fellow New England schools Massachusetts and Connecticut in the big time. He may even help URI move out of its on-campus “arena,” a creaking pit that has forced Harrick to shift nine of the team’s 14 home games to the Providence Civic Center—30 miles away. Ah, dreams.

Unless everybody in the college basketball world is wrong. Odom can play. The big news in Kingston, other than the breakfast special at the Kountry Kitchen out on Rte. 138 or the new shipment at Peter Pot’s Pottery, is that Odom has spent the last six months becoming a full-fledged student-athlete. He enters this year with 24 credits on his transcript and a strong desire to be in college. Contrast that with his academic profile, circa ’96, when he left CTK because he wouldn’t have been eligible to play and fled to Redemption Christian Academy in the Albany suburb of Troy, NY.

“I kind of just paid too much attention to basketball and not enough to academic work,” Odom says. “It was just laziness. If I buckled down and did everything over again, I never would have left Christ the King.”

For a while, Odom was seriously considering chucking the whole college idea and playing for pay. Lord knows he had offers. Odom turned down the NBA twice, despite strong hints that he would have been a surefire lottery pick this past June. He could have played in Switzerland or Greece. He could have played for any CBA team he wanted. No dice. Odom is at Rhode Island because he wants to be a college basketball player. And what’s so bad about that?

“If somebody says I’m bad for college basketball, that almost sounds like an ignorant statement,” Odom says. “Two years ago, I didn’t need college basketball at all. The easiest thing for me to do would have been to go to the NBA and collect the money. The hardest thing would be to stay in college and become better and educate myself.”

“I’m a role model. I think I’m one of the good stories in college basketball. I have overcome the negativity, and I’m playing. I’m a matriculated student in my second year of college, [and I’m] on my way to a degree.”

The legend was born back in March, ’95, when Odom dropped 36 points on St. Raymond’s in the New York Catholic League title game. He was a 15-year old sophomore. For many, it’s difficult to understand the historical significance of the performance. Some might wonder what the big deal was. It wasn’t a state title game or anything. It was one league in one city. But it was New York City. And it was the Catholic League, arguably the best high school basketball played in the country. “I knew I could play, but I didn’t think I was that good,” Odom says. “I think I was in ‘The Zone.’ Everything I threw up went in.”