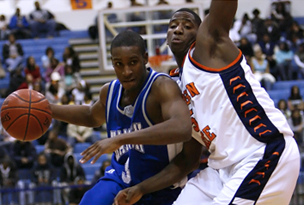 What does 1958 NBA rookie of the year Woody Sauldsberry, Earl “The Pearl” Monroe, and Rick Mahorn, have in common with NBA all star Ben Wallace, Jerome James, Lydnsey Hunter, Flip Murray, and Hawks guard David Young? They all played their college ball at a Historically Black College and University (HBCU). If you found that unexpected, here is another eye opener. There are over 100 HBCU schools in the United States and there are two division one basketball leagues comprised of solely HBCU schools. Those leagues are Mid Eastern Athletic Conference (MEAC) and the Southwest Athletic Conference (SWAC). Because of the rich tradition and talent pool that these two leagues offer, it’s in the best interest of basketball fans everywhere to rank pre-season top 10.

There are a combined twenty-two schools that make up the SWAC and MEAC conferences, so coming up with a “Top 10” was not easy.

The Pirates are coming off of a 3rd place finish in the MEAC last season, winning 8 of its last 12 games. They started four freshmen and a junior. That returning junior just happens to be first team ALL MEAC performer, and team leading scorer Rashad West. Plus they bring back the new comer of the year Mike Freeman. Finally, Coach Nickelberry has brought in the #58th ranked recruiting class. Expect the Pirates to shock someone in the tourney.

The Delta Devils finished in first place in the SWAC last season, and had to settle for an automatic bid to the NIT due to their ticket to the big dance being taken from them by Jackson State University. They return 14 juniors and seniors including ALL SWAC performer Stanford Speech. With their depth size and experience expect to see Mississippi Valley atop of the SWAC again.

The Hornets finished in first place in the MEAC last season, coming off of 21 wins. They return with their leading scorer and top NBA prospect Roy Bright, who dropped about 16 buckets per game last year. Delaware State University, will be tipping off November 12th against Columbia University in the pre-season NIT to be played on the campus of The Ohio State University. They Hornets could possibly win the MEAC.
4. Grambling State University (SWAC)

The Tigers finished 3rd in the SWAC last season. They return with their leading scorer Andre Ratliff, a combo guard out of Pontiac, Michigan. They have 13 upperclassmen on the roster and Ratliff says he wants more than a 3rd place finish.

The Rattlers took Second in the MEAC last season. However, new coach Eugene Harris who replaces long time coach Mike Gillespie believes they can do better than that. They return 10 players all who agree with coach.

The Braves have one of the most stable basketball programs in all of college basketball. Not only was the all time Winningest coach in the SWAC Dave Whitney there 27 years before he retired 5 seasons ago. The lady Braves coach Shirley Walker is entering her 30th year as the head women’s coach. They finished 4th in the SWAC and return a crop of talented players from the Basketball rich state Mississippi.

The Eagles, led by coaching great Fang Mitchell is entering his 21st season as the head men’s basketball coach. He returns five seniors and a very skilled basketball team. Under coach Mitchell Coppin State University recorded more conference championships during the 90’s than any other D-1 program. They have experienced six 20 win seasons out of the last 14. What’s my point? Don’ allow their 8th place MEAC finish last season fool you. They are used to winning and are ready to get back to their old ways.

The Hornets finished 8th in the SWAC last season, but expect that to change. They return an explosive pro prospect, and scoring big guard Andrew Hayles and a seven foot NBA bound, Native American Center, Chief Kickingstallion-sims. Coach Lewis Jackson and his staff beat the recruiting trail and have lofty plans for this year’s team.

The Bears finished 6th in the MEAC last season, they return ALL MEAC tournament team member Baubacar Coly, plus the have 10 players over 6 foot 4. Their most attractive piece however is there coach. Todd Bozeman, a highly talented and respected basketball mind, who can recruit, has done just that. He has brought in 5 highly regarded prospects. Expect the Baltimore boys to make some noise this season.

The MEAC new comers are not to be slept on. They return 10 players from last years team that played as an independent in their inaugural year o playing D-1 basketball. They played the toughest schedule in the country last season with only four home games. This North Carolina school has a winning tradition in all sports on the D-2 level and is loaded with talent. Be on the look out for the Rams.