Hell of A Life 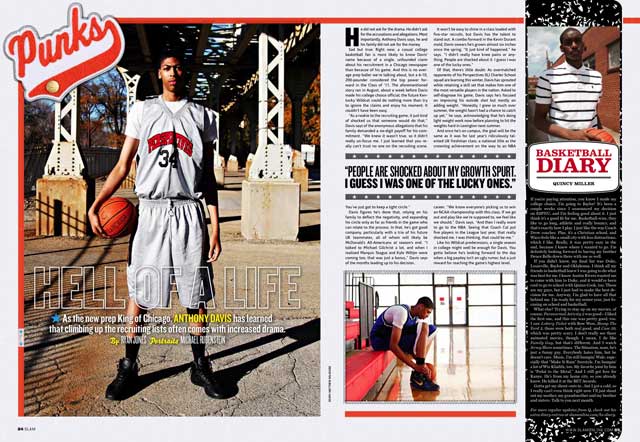 Sad but true: Right now, a casual college basketball fan is more likely to know Davis’ name because of a single, unfounded claim about his recruitment in a Chicago newspaper than because of his game. And this is no average prep baller we’re talking about, but a 6-10, 200-pounder considered the top power forward in the Class of ’11. The aforementioned story ran in August, about a week before Davis made his college choice official; the future Kentucky Wildcat could do nothing more than try to ignore the claims and enjoy his moment. It couldn’t have been easy.

“As a rookie to the recruiting game, it just kind of shocked us that someone would do that,” Davis says of the anonymous allegations that his family demanded a six-digit payoff for his commitment. “We knew it wasn’t true, so it didn’t really un-focus me. I just learned that you really can’t trust no one on the recruiting scene. You’ve just got to keep a tight circle.”

Davis figures he’s done that, relying on his family to deflect the negativity, and expanding his circle only as far as friends in the game who can relate to the process. In that, he’s got good company, particularly with a trio of his future UK teammates, all of whom will likely be McDonald’s All-Americans at season’s end. “I talked to Michael Gilchrist a lot, and when I realized Marquis Teague and Kyle Wiltjer were coming too, that was just a bonus,” Davis says of the months leading up to his decision.

It won’t be easy to shine in a class loaded with five-star recruits, but Davis has the talent to stand out. A combo forward in the Kevin Durant mold, Davis swears he’s grown almost six inches since the spring. “It just kind of happened,” he says. “I didn’t really have knee pains or anything. People are shocked about it. I guess I was one of the lucky ones.”

Of that, there’s little doubt: As overmatched opponents of his Perspectives (IL) Charter School squad are learning this winter, Davis has sprouted while retaining a skill set that makes him one of the most versatile players in the nation. Asked to self-diagnose his game, Davis says he’s focused on improving his outside shot but mostly on adding weight. “Honestly, I grew so much over summer, the weight hasn’t had a chance to catch up yet,” he says, acknowledging that he’s doing light weight work now before planning to hit the weights hard in Lexington next summer.

And once he’s on campus, the goal will be the same as it was for last year’s ridiculously talented UK freshman class: a national title as the crowning achievement on the way to an NBA career. “We know everyone’s picking us to win an NCAA championship with this class. If we go out and play like we’re supposed to, we feel like we should,” Davis says. “And then I really want to go to the NBA. Seeing that Coach Cal put five players in the League last year, that really shocked me. I was thinking, that could be me.”

Like his Wildcat predecessors, a single season in college might well be enough for Davis. You gotta believe he’s looking forward to the day when a big payday isn’t an ugly rumor, but a just reward for reaching the game’s highest level.