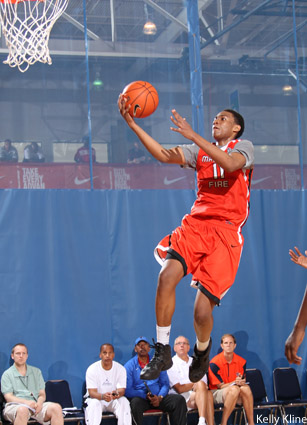 John Wall’s fame began when he was a junior in high school. Here are the five prep juniors most likely to follow his path to stardom:

Nerlens Noel, Tilton (NH) School
Nerlens is hands down (or up, as it were) the best high school shot blocker in the nation. This 6-10 pivot possesses great footwork, a quick bounce off the floor, active hands and long arms that allow him to contest anything in his vicinity. He’s also great at timing his jump. Noel has finished games with double-digit blocks on numerous occasions. He emerged as the main talk of the Nike Peach Jam in July after averaging over 12 points, 9 rebounds and 7 blocks during the tourney while leading his BABC squad to the championship.

(Pictured Right)
Probably the best-known name on this list right now, the 6-8 Parker led Derrick Rose’s alma mater to the Illinois Class 4A state title last season after averaging a team-high 15.3 points and 5.9 rebounds as a sophomore. This past summer, Parker refuted any remaining doubters as he turned heads with his impressive performance at various elite tournaments, including winning tournament MVP at the Nike Global Challenge and the FIBA Americas U16 Championship in Mexico. The multi-faceted forward, whose father Sonny is a Windy City hoops legend, is known for his athleticism, explosiveness and ability to score in bunches.

Julius Randle, Plano (TX) Prestonwood
Randle is a very gifted athlete who can play just about any position on the floor. As well-rounded as you’ll find for someone his size, the 6-9 power forward has the agility and athleticism to play out on the perimeter and do damage. Randle, a Dallas native, handles the rock as well as anyone and is super explosive to the basket. Give him room, and he’ll sink it from distance. In addition, his pro-ready physique allows him to bully his way in the paint and be effective on the glass. This versatile junior averaged 24 points and 12 rebounds last season while leading Prestonwood to the TAPPS 5A title game.

Chris Walker, Bonifay (FL) Holmes County
When you look at the stat sheet at the end of the game, you realize there aren’t many players who can fill up just about every column as well as Walker does. This 6-10 forward averaged 26 points, 14 rebounds, 8 blocks, 5 assists and 3 steals per game last season for Holmes County as a sophomore. Walker can play with his back toward or against the basket and can handle the ball well enough to create plays for himself on the perimeter. Whether it’s pulling up for a jumper or finishing strong at the rim, his length and agility have produced a five-star recruit.