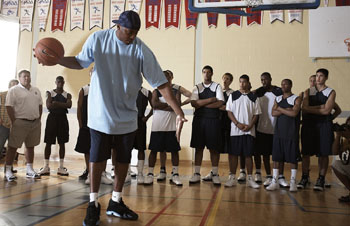 From Wednesday through Friday this past week, Nike Canada held its Skills Academy in Toronto. Billed as hosting the top-20 high schoolers in the country, the Skills Academy breaks form from the traditional camp structure of straight out five-on-five and focuses strictly on developing the players at the fundamental level. Raptors’ assistant coach Jay Triano (who’s also the former head coach of Canada’s national team) headed up instruction by running the campers through drills and was assisted by University of British Columbia head coach Kevin Hanson and Toronto-based AAU coach Wayne Dawkins. When the kids weren’t on the court, they were getting some life lessons from people associated with Canadian basketball on everything from how to deal with the media, to strength and conditioning training to how to prepare for life after basketball.

The guys were finally able to put all those drills to work on Friday night in a scrimmage, which definitely didn’t give me the chance to go as in depth on players who stood out as I’d have liked to, but again, that’s not what the camp was about. Anyways, from the limited on-court action that I saw, here’s who stood out:

Olu Ashaolu took the official role of the big dog over the three-day camp. When he wasn’t helping the younger kids out on the court, he was flossing the all-around polish and flat-out hustle that goes with his game. Built like a four but with the game of a wingman, the 6-7, 18-year-old confirmed that he has in fact got enough core credits to skip his senior year of high school and will be playing for coach Kerry Rupp at Louisiana Tech in September.

With Ashaolu now removed from the high school scene, Pickering, Ontario’s Devoe Joseph (pictured in photo) might be Canada’s best high school player, and he’s at least the nation’s best two guard. He’s a killer in the open court and has loads of confidence in his outside shot. His younger brother Cory was also at the camp and is coming up the exact same way.

At just 15 and already 6-9 with a solid build, Maurice Walker may have had the most upside of anyone at the camp.

On the second day of the camp, New Jersey Nets’ center and Toronto native Jamaal Magloire stopped in and talked with the kids about the sacrifices they need to make to get to the next level. After that, he handled questions from a sparse media showing. Among the topics covered, how he’d love to be a part of Canada’s basketball team—if they can qualify for the Olympics without him later this month in Las Vegas.

In an odd NBA-related surprise, I saw Jorge Garbajosa in the lobby of the Westin hotel over the weekend. I’m not sure why he was in Toronto (I assumed he’d be spending his summer in Spain) but he’s there, working out with Jay Triano. When I saw him, Garbo was wearing flip-flops, which showed his still-healing ankle and it didn’t look good. It’s still looking seriously swollen. I talked with him about Garbajosa at the end of the camp.

SLAM: How’s Garbo doing? You mentioned him in your concluding remarks.
Triano: He’s doing great. He had a workout today and we’re going to see how his ankle feels (on Saturday) and whether he’s got clearance to play in the European championships.

SLAM: Do you want to see him do that?
Triano: If he’s healthy, yes because that’ll just be more confidence for him on his leg going into next season. So if he can, that’d be great. We’ll put him through a hard workout and we’ll see how he reacts.

SLAM: I saw him walking around in the hotel lobby today and his ankle still looked pretty big.
Triano: Yeah, me too, but it didn’t slow him down in his movement. I did notice that too though.

At the end of the camp, Triano gave a concluding speech about the importance that being a character player will have on these kids’ careers down the road. He mentioned that at the NBA trade deadline, the Raps had the chance to pull the trigger on deals that on paper would have made the team much better. He said that the deals were abandoned because the players involved weren’t character players. Here’s what he had to say about that:

SLAM: You mentioned trades that didn’t happen at the deadline. You want to drop any names on that story?
Triano: No. It doesn’t help anybody, and I’m just surprised that some of those guys…they’re good players but nobody wants them. (They’re) bad apples.

SLAM: Is character a big thing around the league? I know I’ve heard it talked about within the Raptors organization the last few years, is it a big thing for other teams in the league?
Triano: San Antonio’s the same way. If you’re not cohesive, it’s too long a season to be positive about going to games, everything like that.

Lastly, I definitely have to shout out my main man Mike at Nike (not to be confused with THE Mike at Nike) for bringing me out to Toronto and giving me access to everyone at the camp.