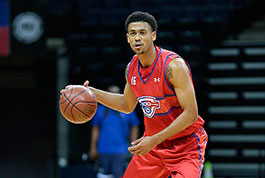 One of the top shooting guards in the class of 2015, Tyler Dorsey, has committed to Oregon. The Cali native is known for his smooth shooting touch and knack for scoring — no more evident than in his scoring average (34 ppg) for this season and the number of games he’s reached the 40-point mark already (see below). He was once an Arizona Wildcat commit, pledging to the program in January of 2014 before de-committing last June.

Dorsey, a four-star guard who is ranked No. 38 overall in the ESPN 100, originally committed to Arizona but after five months as a Wildcat he decided to reopen his recruitment last June.

Dorsey, one of the most gifted scorers in the country, is averaging 34 points a game for Maranatha this season and has had seven games where he’s scored 40 points or more.