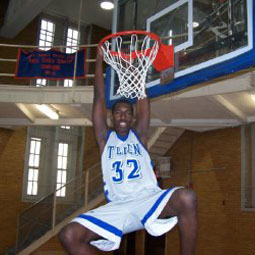 Alanzo George, a 6-8 high school senior from Brooklyn, hasn’t walked in almost two months. About a week after his 20th birthday, George’s dreams of playing division one basketball were crushed in a car crash that has left him paralyzed from the waste down. Despite not playing basketball in his final year of high school, he made a verbal commitment to join Manhattan College’s team next season. Even with the prayers and support of his coaches, teammates, school, friends and family, without generous financial support and costly rehabilitation, Alanzo George’s life will likely never return to normalcy.

“He had just finished working out with one of my assistants, doing some individual work, around 4:30 that day,” remembers Eric “Rock” Eisenberg, who coached former University of North Carolina star Ed Cota at Samuel Tilden High School and, according to the PSAL website, has placed 95% of his players in college over the years. “I got a call that night about 8:30 from Alanzo’s Mom saying that he was in a car accident on King’s Highway with two other kids from the team (Seniors Darrell Nelson and Theo Francis). Alanzo had to be taken out of the car by the ‘jaws of life.’”

George, a native of the Caribbean Island of St. Vincent, came to the U.S. just before he entered high school. He, his mother, Laverne, and younger brother, Lorenzo, lived on East 42-street off of Lennox Avenue in Brooklyn. In 2006, George passed up the chance to travel cross-country with the Bronx-based Gauchos A.A.U. team, opting to remain home and help watch after his brother. A “gentle giant” of sorts, his mild manner and caring heart earned him respect from friends and strangers alike.
“He is very competitive and at the same time very sensitive and easy to get along with, too,” offers Kenechi Martins, a junior two-guard on the Tilden team. “If he would have played this year we probably would have gone all the way. How could something like this happen to him?”

During his junior year, George averaged over 15 points and a mind-bending 20 plus rebounds. Although Tilden’s Blue Devils struggled through a 1-13 record in 2005-’06, George was offered a scholarship to the University of Akron and reportedly received interest from Fordham, St. Bonaventure and St. John’s. While Akron may have been further from his family and New York than George would have like to have gone, he still needed to return to Tilden to complete his secondary education requirements.

“He was three months too old, he turned 19 on March 6 and in order to participate in the P.S.A.L you have to be 19 after July 1st,” says Eisenberg, who rushed to King’s County Hospital’s Intensive Care Unit to be with George and his family after the accident. “We tried to raise some money to send him to St. Thomas Moore [Prep School], but it didn’t work out.”
George stayed at Tilden and worked out with the teams while hoping to land an official spot at a division one school. Even without the chance to be his school’s best player, he stayed positive about his prospects.

“He was disappointed he couldn’t play, but he didn’t bitch and moan about it,” said Alex Groothuis, a former assistant coach under Derek Whittenburg at Wagner and then Fordham. Groothuis recruited George last season while Groo was still coaching at Fordham. After stepping away from coaching to spend more time with his children while his wife battled cancer, Groothuis occasionally came to Tilden to work with their players as a favor to Coach Eisenberg. “Even after I left Fordham and wasn’t recruiting him anymore I still wanted to hang out with him. He’s just a really good kid and it’s easy to say that when he can play ball but, if you got to know this kid you’d love this kid,” Groo says.

On the evening of Thursday, March 15, George, Darrell Nelson and Theo Francis planned on attending a “movie night” at Tilden and wanted to change their clothes before things got started. Driving on Kings Highway and Avenue J in Brooklyn, Francis’ car skidded and was struck by an oncoming SUV going in the right direction. The driver, Francis, was, Eisenberg said, virtually uninjured except for “emotionally.” In the front passenger seat, Nelson escaped with some stitches on the right side of his face and bruises. Riding in the back of the car, George took the worst of the impact. He was admitted into the Intensive Care Unit at King’s Hospital suffering from severe swelling on his spine. His C4 and C5 vertebrae were both fractured.

“He’s the first person I ever played basketball with, I was just talking to him the night before,” said Warren Hazel, a senior honor student on both the basketball and football teams at Tilden. “At first I couldn’t believe it, I thought they were playing with me, but when I found out about it was true I started to cry.”

The following Monday, doctors performed surgery on George’s spine in an attempt to fuse both his C4 and C5 vertebrae. While the injury is consistent with high-fever, George suffered additional problems after surgery that forced him to breathe via a ventilator after initially being able to breath and speak. Due to the tubes in his mouth, he communicates mostly through eye contact and blinking.

“The last time I saw him he was in a hospital bed and he can’t move. From what I hear, the progress has been very slow,” says Groothuis. “That was two weeks ago and now I can’t go back. It was the most depressing thing I’ve ever seen. I’m praying he walks again.”

Doctor’s have told Eisenberg and George’s family that there is a chance he may walk again but it is far from guaranteed. As George’s mother could only afford medical bills that her son’s 45-day emergency coverage from Medcaid pays for, his friends, teachers, coaches and teammates at Tilden and Ed Rose of The Maxim Group, an investment baking firm where George interned last summer and during his senior year, are committed to raising the funds required for his recovery.

Since his accident, a series of events have been already taken place, including the first annual Alanzo George All-Star Game. Former NBA superstar Daryl “Chocolate Thunder” Dawkins made an appearance at Tilden to sign autographs and show support for the event. On the morning of the All-Star game, Eisenberg went to see George in the hospital and was moved to tears when he moved his legs for his coach for the first time. The Tilden community has planned more benefit campaigns and automatic donations are available via agroadtorecovery.com. However, George’s supporters insist this is on the beginning of a long process.

“I don’t know what all of his motivations were but, he was the most respectful and the hardest working kid I had,” says Ed Rose, who Coach Eisenberg asked to give George an internship. “He did whatever was asked of him.”

After taking such a liking to George during his internship, Rose felt obligated to establish The Alanzo George Road to Recovery Trust to help organize the cause. Rose has already risen over $30,000 and plans to hold major fundraisers, like dinners and golf outings, to continue the effort. While the generosity of others could never guarantee George regained mobility, it will certainly give him a fighting chance.

“I don’t know where I’ll get the money but, I’ll get it. This is for the rest of his life” Rose says. “I put on one of these ‘TEAM ALANZO’ wrist bands and I’m not taking it off until we reach at least $1 million dollars in the trust.”