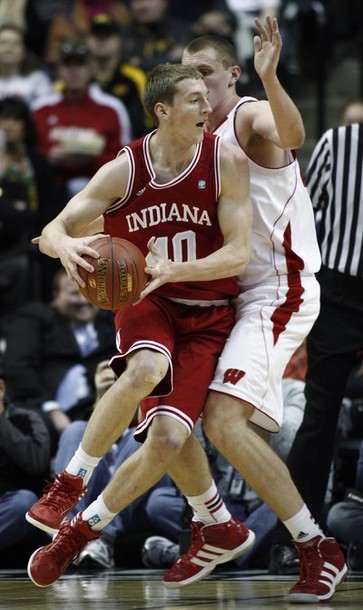 Indiana: A state that is completely obsessed with basketball. Fundamentals, such as proper shooting form and help defense, are instilled in youngsters from the first time they pick up a basketball.

Hoosiers: A program that has been synonymous with winning throughout the years and has as loyal a following as any other college program in the nation, bar none.

How about the last three seasons: The Hoosiers compiled three straight losing records, with a grand total of 28 wins and 66 losses… but the fans kept filling up the 17,742 seats at Assembly Hall, kept cheering for their team and kept patiently waiting for the wins to pile up on their home floor.

As the old adage goes, “Good things come to those who wait,” and Indiana fans are currently reaping the benefits of their patience and devotion in the form of quality basketball presented to them on a much more consistent basis than they have had at any point in time during the past three years.

It all begins on the practice floor. Indiana’s head coach and leader, Tom Crean, who has supreme confidence from the university (he inked a lucrative, 10-year contract in the summer of ‘08) pushes his players to the limit. Even when they were losing game after game after game in those first three years, he and his staff were developing players like quality shooting, heady lead guards Verdell Jones and Jordan Hulls, versatile forward Christian Watford, wings Will Sheehey and Victor Oladipo, who are still honing their talents while learning how to maximize their athleticism, glue-guy forward Tom Pritchard and sharpshooter Matt Roth.

Flash back to November 7, 2011. The Hoosiers are going through one of their first official practices of the season. Having been on hand for practice as a manager for a few weeks during my sophomore year and following the team’s progress during my four years at Indiana (alumnus as of May 2011—unfortunately), I have had the opportunity to see Coach Crean’s prior teams first hand. Instantly, it’s clear: The scene at this practice is noticeably different. The leadership, charisma, enthusiasm and, most importantly, basketball talent were multiple levels above where they had previously been under Crean’s watch.

“The level of athleticism that we have,” Crean announced to his team at the heart of practice. “It’s on another level.”

That declaration—that belief—is something that Crean hasn’t been able to say about his teams in the past.

The addition of consensus five-star, McDonald’s All-American freshman recruit Cody Zeller—an agile 7-footer who runs the floor like a gazelle, has excellent touch around the hoop, solid athleticism and is an underrated passer—is one of the main reasons that their head man can confidently make his present assessment.

“He’s got a tremendous internal clock in the way that he plays,” says Crean of Zeller. “I don’t know what the proper psychological term would be, but that’s what he’s got. He never speeds up—even with the emotion of the game and all of the things going on around it.”

The catch? Every one of them plays basketball in the state of Indiana (Jurkin plays high school ball in North Carolina but played AAU with Indiana Elite). Perhaps learning from the prior failures of Coach Mike Davis (2000-06), who didn’t land Sean May, Josh McRoberts, Greg Oden or Mike Conley, Coach Crean has made it a priority to lock down the borders of talent-laden Indiana and keep upper-echelon players flowing into Bloomington.

With two sentences, Cody Zeller seemed to echo the sentiment of every Hoosier commitment. “Being from Indiana and being able to play at IU is special. I felt very comfortable with Coach Crean, the University, the staff and the players here.”

As fantastic as the Hoosiers recruiting success has been, there is business to take care of this season.

The Hoosiers have arguably the most impressive two wins of the collegiate season—a breathtaking, buzzer beating three-pointer by versatile, 6-9 junior forward Christian Watford led to a 73-72 win against No. 1 ranked Kentucky and a poised win against No. 2 Ohio State. Combine those with a 19-6 record (7-6 in the grueling Big 10), and the Hoosiers have reason to believe that they can make legitimate noise during March Madness.

“I think there’s a lot of individual improvement going on with this team,” explained Crean. “I think you can look at different players and you can find certain aspects. I think the improvement is they’re collectively getting mentally tougher. We went through a little drought where we kind of forgot that edge that you got to have, especially after we beat Ohio State. I think anytime where you have success like that and you haven’t had as much a group, it’s real easy to fall off a little bit and I think we did. But, I think we got that back. I think these guys, their work ethics are fantastic.”

“Going through tough times makes you stronger,” rationalized Watford, reverberating the words of his coach. “We’ve been through a lot, but we are seeing results and this can be a very special season.”

To this day, it’s hard to believe all that the Hoosiers and their fans have been through. During the past three seasons following former coach Kelvin Sampson’s departure after being relieved of his duties, thanks to negligently making over 100 impermissible phone calls to prospects, the program had endured a bad press and a slew of transfers combined with an uphill recruiting battle.

It’s one thing for John Calipari to have his Final Four appearances from Massachusetts and Memphis vacated from the record books, but when a situation such as the Sampson debacle happens at an NCAA ‘blue blood’ school that has rarely had to worry about scandal, it hits the fan base the hardest.

Upon being hired, Coach Crean made it clear that he wanted to bring the storied, five-time NCAA Championship Hoosier program back to it’s winning ways, but he never forgot about the unwavering commitment to the Hoosiers fans, and that has made him a popular man on the breathtaking, Bloomington-based campus.

“Our fans and former players were key in helping us get through the tough times,” stated Coach Crean. “Their support never wavered.”

With their darkest days behind them, the Indiana Hoosiers and their faithful fans can finally begin to disregard the unfortunate events of the past as they attempt to seize the moment and look toward the future, their eyes staunchly set on Banner Number Six.