How To Make It As Americans 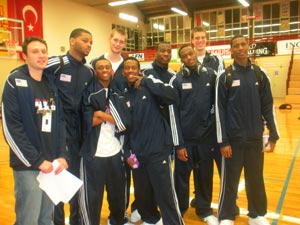 In 2008, I had the wonderful opportunity to spend five days in Germany shadowing Team USA at the Albert Schweitzer Tournament, which is basketball’s second biggest high school international competition, after the World Championships. Part of what makes the AST so unique is that it’s held on the U.S. Army Base in Mannheim. (You can read more about my experience two years ago here.) Anyway, last month, for a week (April 3-10) I had the same opportunity. If my first time covering the AST was the best journalistic experience of my life…well, the second time topped it. You can’t replicate the unique adrenaline that flows when you do something special for the first time, but often the sequel (The Godfather II, The Empire Strikes Back, The 2001 Lakers) is even better; familiarity and gained wisdom can make it easier to step back and a appreciate a great time.

Before getting into the daily diary of my time in Germany, I’d like to introduce you to Team USA. After all, if I can’t paint mini-portraits of these kids after spending 7-8 days with them, I wasn’t doing my job.

Ryan Boatright
Year: Junior
Position: PG
Hometown: Aurora, IL
College: Undecided; Boatright de-committed from USC after the Tim Floyd fiasco. He had committed to USC in eighth grade.
Team-given lookalike: Tiger Woods
Team-given lookalike rating: 3 of 10. Boatright is nice kid with some nice dreams; Tiger Woods is an orange pornstar-slaying herb that just happens to be a golf prodigy. Boatright is a real person; Tiger is manufactured by Nike.
Bio: Charismatic on and off the court, Boatright finished second in the tournament in scoring at 19.6 ppg. Boat did much of his damage on fearless forays to the rim and bailout threes. He has a nice knack for the “oh snap, my team needs me to score right now or we’ll be in trouble” bucket. With the right coaching, the sky is the limit for Boat at a big-time program.
Quirk: Due to issues breathing out of his nose, Boat’s the only kid we’ve met who can go for 25 and 5 while consistently looking like he’s about

Michael Chandler
Year: Junior
Position: C
Hometown: Indianapolis, IN
College: Louisville
Team-given lookalike: The Will Smith/DeMarcus Cousins hybrid.
Team-given lookalike rating: 8 of 10. MC Chan, as we dubbed him, is a promising young big man and he has a Fresh Prince-esque sense of humor, so it fits.
Bio: Chandler, like many developing bigs, is a work in progress. He has a good touch around the rim and when he’s active, he’s most definitely an asset. He’ll have another year of work in high school and up to four years with Rick Pitino to reach his potential. We’ll be rooting for him.
Quirk: A pretty remarkable story teller.

Joshua Henderson
Year: Senior
Position: PF/C
Hometown: Roanoke, VA
College: Vanderbilt
Team-given lookalike: Shawn Bradley
Team-given lookalike rating: 1 of 10. Aside from being white and tall, Henderson is nothing like Shawn Bradley. The team was really lazy when coming up with that one. Epic fail.
Bio: Henderson led JJ Redick’s former high school, Cave Spring, to back-to-back state titles ’09 and ‘10. A mobile big with a nice touch, Henderson was one of the odd men out in the U.S. rotation due to the need for a perimeter-based attack. Don’t let that fool you; with AJ Ogilvy possibly heading to the NBA, Henderson might just be thrown right into the SEC fire next year.
Quirk: Henderson’s self-deprecating sense of humor highlighted an intelligence that will serve him well on the next level. Too many kids get down on themselves and don’t know to get up; Josh was ready to contribute when he was called upon in the medal rounds. That and a stuffed monkey that helped him draw a few charges are what we’ll most remember.

Damien Leonard
Year: Junior
Position: SF
Hometown: Greenville, SC
College: Undecided
Team-given lookalike: TI
Team-given lookalike rating: 9 of 10. Jay-Z notes on “A Star Is Born” that TI “literally decided to shoot up the charts.” If there’s a more appropriate lyric out there to describe Dame’s game, we haven’t found it.
Bio: Leonard boasts near limitless range and athleticism and, at 6-5, he’s probably still be growing. A good kid who will be able to go pretty much any school he wants, we hope he chooses the place that helps him develop into the best player he can be—the coach who demands 1,000 jumpers a day and copious amounts of game film study. He led the tournament in threes made and attempted.
Quirk: The team’s resident poet laureate.

Chris Manhertz
Year: Senior
Position: PF
Hometown: The Bronx, NY
College: Canisius
Team-given lookalikes: Dwight Howard, 50 Cent, Venom from Spiderman
Team-given lookalikes rating: N/A. Manhertz has too many nicknames and it’s far too complicated to figure out which one fits. Not even he knows. Hell, we moved on to awful puns after the first day (“Momma, there goes that Manhertz,” “The Oak-Manhertz”, “That’s Not You’re Mother, That’s A Manhertz”).
Bio: Manhertz finished third in the tournament in rebounding and plays like his name suggests: ruggedly and all out. We think he’ll do very well at Canisius. Manhertz battled foul trouble at various points in the tournament, but it wasn’t for a lack of knocking opponents on their asses.
Quirk: Defends NYC’s own Papoose against the merciless haters.

Lawrence North in Indy, Rooq provided good leadership off the court, too. He also hit, what at the time, was the biggest shot of the tournament for us.
Quirk: Led Team USA in smoothness and tattoos.

Marshall Plumlee
Year: Junior
Position: C
Hometown: Winona Lake, IN
College: Undecided
Team-given lookalike: Butthead, from Beavis and Butthead
Team-given lookalike rating: 5 of 10. What’s funny about this is that Plumlee’s personality is diametrically opposite of Butthead’s. Butthead sits around critiquing music videos, Plumlee is always moving, doing something.
Bio: The youngest Plumlee son–in case you live under a large rock, his two older brothers, Miles and Mason, just won a national championship at Duke–Marshall is hard-hustling big with great energy. His low-post game is still developing, but his contributions defending the paint and on the glass were enough to warrant him major minutes for Team USA. Amazingly, despite having two high profile older brothers and being the youngest son in a basketball family, Plums has no discernible ego. None. What. So. Ever.
Quirk: Great with kids.

Jamal Tuck
Year: Senior
Position: SG
Hometown: Aviano, Italy via Alabama
College: Undecided.
Team-given lookalike: Kobe Bryant
Team-given lookalike rating: 6 of 10. Tuck is an American-born two-guard who has spent a lot of time playing ball in Italy.
Bio: An athletic kid who should be able to score the ball at the next level, Tuck handled a lack of burn as well as you can expect a kid in his situation to.
Quirk: Likes Alabama more than Italy. This highlights something about being a kid in an army family: home truly is where you’re from and not where you’re at.

Dillon Wadsack
Year: Junior
Position: G
Hometown: Ramstein, Germany via San Antonio, TX
College: Undecided
Team-given lookalike: A human version of the main character from Antz, although some groupies also said he looked like one of characters from Twilight.
Team-given lookalike rating: 7 of 10. We haven’t seen either of those films but any time those surrounding you compare you to Hollywood characters—animated or otherwise—that can’t be a bad thing.
Bio: The local boy and ex-teammate of Team USA ’08 Schweitzer alum Brent Shuck, Dillon filled in well off the bench, executing on offensive and fighting hard on D. He was one of the many quiet and diligent workers who contributed to Team USA’s excellent chemistry and great reputation around the army base.
Quirk: He’s not a player, he just crushes a lot.

Kevin Ware
Year: Junior
Position: SG
Hometown: Atlanta via the Bronx.
College: Tennessee
Team-given lookalike: Chris Tucker.
Team-given lookalike rating: 7 of 10. Ware knows when to laugh at a funny joke.
Bio: An explosive guard with a solid midrange game, Ware started next to Ryan Boatright and created far more opportunities off of dribble penetration than the officials gave him credit for. A few impressive dunks also got the GI’s out of their seats. Injuries slowed Ware down a little bit as the tournament wore on. Regardless, we’re amped to see what he does under Bruce Pearl in a little over a year’s time.
Quirk: This may be a trend that we’re not aware of, but KWare uses the letter Q more than anybody we’ve met (I.e. “I qotta qo work on my qame). We like this. The letter q is underrated.

Andrew White
Year: Junior
Position: F
Hometown: Chester, VA
College: Undecided
Team-given lookalike: Rajon Rondo
Team-given lookalike rating: 8 of 10. White could pass for Rondo’s taller, younger brother.
Bio: “Midrange out the ass,” is the way one teammate described White’s game. Indeed, White came on strong and nailed a few pretty midrange jumpers in the medal rounds after not seeing much action earlier in the tournament. White has a lot of untapped potential and room to grow both physically—he’s long and rangy–and on the court. We’re very excited for his future.
Quirk: Quiet, but also excellent at making an argument. White might have a career as a lawyer after basketball.

Royce Woolridge
Year: Senior
Position: SG/SF
Hometown: Phoenix, Arizona, via L.A.
College: Kansas
Team-given lookalike: Flo-Rida
Team-given lookalike rating: 5 of 10. Decent, although it would have been better if Royce looked like a different Florida-based rapper, Rick Ross, so we could yell BAWSE! whenever he did something.
Bio: Royce was an excellent captain for Team USA. He went about his business and the rest followed suit. The son of former NBA player, Orlando Woolridge, and younger brother of Tennessee’s Ronaldo Woolridge, Royce plays hard on both ends of the floor and boasts some finishing moves that belie his age. He led Team USA in minutes played and often guarded the other team’s best player.
Quirk: Might end up winning So You Think You Dance.

Team USA was coached by former NBA player and coach Larry Krystkowiak. Krystkowiak challenged the team by installing a lot of NBA offensive sets, and the kids responded well. He watched copious amounts of film (some of it with yours truly) and communicated well to these young up-and-comers. His communication and leadership reminded us of a really good AP teacher.

Assistant Coach Scott Willard—my Kenyon fraternity brother, like “finding a needle in a haystack expo center” as I put it in ’08—helped with the Xs and Os and the scouting. It’s worth noting that Willard graduated three DI players this year from The Miller School in Virginia, where he coaches and ADs. Assistants Willis Holliday (played with former Piston Michael Curry at Georgia Southern and coaches some feisty, pressing ladies for the AAU South Carolina Cougars) and Francis Williams (big in the Seattle basketball scene) helped run practice and keep the troops in line. Team USA was put together by Darren Matsubara of Adidas, who might have a degree in applied chemistry. Mats also brought his daughter’s stuffed unicorn to Mannheim. “Put that in your blog.” Consider it done.

Team chaperon Martin Hopfner proved to be the most incredible German of all-time by rooting for Team USA against his own country. And I, the journalist, earned the team-anointed nickname of “Malibu’s Most Wanted,” fitting because I like that film way too much.