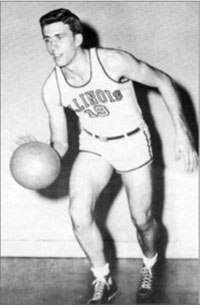 It’s not a fledgling punk band, or some ridiculously titled new lipstick flavor.

It’s what star players from two of the most dominant college basketball teams in the 1940s couldn’t curtail every time the topic was brought up: Did Adolph Hitler, Hirohito and the University of Wyoming swipe a National Championship which should have belonged to the Fighting Illini?

The Wyoming Cowboys won the NCAA Championship in 1943, then beat the NIT champions for good measure, but many contemporaries believed Illinois was by far and away the nation’s best team that year. The “Whiz Kids” of Urbana-Champaign were two-time defending Big Ten champions, ranked No. 1 in the nation, won 11 of their 12 conference games by double digits and finished the season on the type of roll that could put Cinnabon out of business: their last three wins were 50-26 against 1941 national champ Wisconsin, 86-44 against Northwestern and 90-25 against Chicago.

Ahead of Illinois was the NCAA Tournament and an eight-team field including Georgetown, Texas and Washington. In later years, the Whiz Kids agreed they would have swept everybody else away. “I think we could have walked through it,” ’43 team member Jack Smiley told The News-Gazette in 1999. “We weren’t even close relative to competition from below.”

“We would have won it all,” his teammate Gene Vance agreed.

World War II happened. Actually, it was already a few years in the happening by the time 1943, and no American could escape its toll. For three Illini starters, that came in the form of a military draft which sent Smiley, Ken Menke and Art Mathisen to war right after the regular season ended in March. Illinois coach Douglas Mills decided the team would be better off skipping the postseason rather than play with only two starters.

Still, the question of how Illinois would have fared remains.

Despite the Whiz Kids’ confidence, Wyoming would not have been an easy out. The Cowboys finished their season 31-2 while playing only nine games at home. They’d won their games by an average of about 20 points and with three All-Americans had nearly as much talent as Illinois. And Wyoming had Kenny Sailors—the inventor of the jump shot. Remember this is 1943 and nobody knew how to defend a 5-11 guard who was stutter step dribbling, feinting and rocketing three feet into the air before shooting. Hell, it’s still tough trying to guard someone like that.

Sailors, at age 92, is the lone surviving starter from either team. This is not the type of man who goes down without a fight, and the two-time National Player of the Year certainly was swinging on the issue if this 2010 interview with Wyoming’s American Heritage Center is any indication.

While Sailors knows Illinois was a great team—he’d play against two of its members later in the NBA—he insinuates that the team’s draftees might have been able (or at least try) to postpone their departure a couple weeks in order to play in the NCAA Tournament. But, possibly, Illinois’ coach Mills didn’t want to risk staining the season’s Big Ten regular-season title—then arguably a bigger deal to the players than the NCAA title—by losing in a post-season tournament.

Perhaps, Sailors said, Mills “had learned enough about Wyoming to decide ‘I don’t want to want to tackle that team. They look pretty good to me.’ We beat a lot of good teams. Maybe Illinois figured they couldn’t compete with us.”

Let’s try to settle this once but likely not for all.

I won’t pretend to know these teams well enough to judge which one is superior—I doubt many there are many people still alive who could—but I’ll at least throw out some essentials:

The backcourt battle would have featured Sailors, who would go on to become a leading scorer with the Denver Nuggets, and the 6-3 Jack Smiley, who was regarded as one of the best defenders in the nation. It would be fascinating to see if Smiley’s length and quickness would have disrupted Sailors’ shot.

The frontcourt battle would also be taut. For Illinois, 6-5 senior captain Art Mathisen held down the fort inside. He was one of the team’s four all-conference players. The fundamentally sound by not overly quick Andy Phillip*, the Big Ten Player of the Year, joined him.

Phillip, like every starter except Mathisen, was 6-3. They were all essentially interchangeable and loved to run in a fast-breaking offense that was ahead of its time. It’s a testament to Phillips’ versatility that in the 1950s he would transform into a point guard and five-time NBA All-Star.

Wyoming’s big men would not have been intimidated, though. All-American Jim Weir, a very quick 6-5 power forward, might have matched up with Philip as well as anybody he’d ever faced. Center Milo Komenich, another All-American, was plodding but a rugged defender and rebounder. He proved to be a clutch baller during Wyoming’s last two games of the season when he held highly touted centers from Georgetown and St. John’s in check to help Wyoming secure its most impressive wins.

We’ll never know if Illinois would have won its only NCAA Tourney title in 1943 instead of Wyoming if the US hadn’t been dragged into World War II. We’d be lucky even to find video of the Whiz Kids (there’s only scant video of Wyoming). It also hurts that the two programs did not play a mutual opponent in ’41-42 or ’42-43.

So, in the end, all we have is conjecture. For some, like the Wyoming and Illinois players themselves, that never gets old.

*Phillip’s birthname was Andras Fulop. His parents were Hungarians who’d moved to southern Illinois. Although Phillip might never have gotten official Hungarian citizenship, his ethnicity opens up the question of whether he—not Kornel David—should be considered the first Hungarian in the NBA. Phillip at least deserves an asterisk on this Wikipedia page.

This article originally published on Evin’s blog about sports and society.