“Our mission is to provide the opportunity for young athletes to play basketball at a highly level competitive level. We are also committed to each athlete in assisting their growth and development of their athletic, educational, and social skills.” — Exodus NYC Mission Statement

Exodus NYC is one of New York City’s premiere AAU programs, having produced some of the best female hoop stars the country has seen. The program has been home to many talented female basketball ballers such as Kia Vaughn, Epiphanny Prince and Bria Hartley. The program’s current director is Thomas Davis, who is the cousin of Exodus founder Robert ‘Apache’ Paschall and is also the head coach of the women’s basketball team at ASA College. Exodus has won several AAU championships over the years, most recently winning the Nike Rose Classic (which they are known for winning often). The program has produced 13 McDonald’s All-Americans, 73 Division I athletes, and six WNBA players (three of whom went on to be all-stars). As prominent as the program has become, their start wasn’t so glorious.

The late Robert ‘Apache’ Paschall founded Exodus NYC in 1997 in a time when girls basketball was not nearly as popular and well-known as it is today. There were not that many AAU programs that catered to girls, so Paschall came up with the idea to have a team for underserved young females in his neighborhood. Initially it was conceived as a program for boys, but he opened the door to girls at the request of his sister, Danae, who played on his first girls’ team in 1998.

Paschall came from a place where hardships were the norm: His mother, Elaine Bartlett, spent 16 years in prison for selling cocaine and began her sentence when Paschall was only seven years old. His brother also spent time in prison for dealing drugs. Not wanting his sister to face the same fate, he used Exodus as an outlet for her, as well as other females in the neighborhood.

“He just founded a team with the local girls in the neighborhood that were getting in trouble,” says Davis. “He just tried to figure out a way to keep them off the streets. Honestly, we didn’t think it would turn into this. My cousin—his sister—he just wanted to keep her out of trouble.”

Paschall saw an untimely and unfortunate death in 2012 after succumbing to a heart attack. He was also battling skin cancer. Davis has been director of Exodus ever since, and has continued to keep his cousin’s vision alive. What started as a local backyard team has now become one of the most prominent girls’ basketball programs in the nation. Intended to keep friends and family out of trouble, the program expanded to do the same for girls all over.

Davis and the rest of the Exodus NYC staff do everything they can to create a better opportunity for all of their players away from the court as well. They work as a family unit and make sure no one is left behind. Most of the funds are “home funded;” they do not charge schools for kids and all of their recruiting is straight up and down. The program depends mostly on what the parents of the players can afford, and Davis and the other staff members do what they can to come up with the remaining operating costs. He continues the vision of helping these young girls seek opportunities to take their game to the next level by connecting current Exodus NYC players with alumnae of the program to get a better grasp on things and to hear what comes after from people who’ve gone through the same process.

“They have a ‘big sister’ for each of the kids in the program, where if they can’t talk to the kid everyday, the kid could shoot them a text or an email and just ask them questions about what it feels like to be recruited, how it felt in college and then so forth,” says Davis. “We just thought that’d be something cool for the kids to kind of get an idea of what the next level is from somebody who’s been through what they’ve been going through now.”

As the program grew, so did the opportunities, and that tradition continues till this day. Girls like Marina Mabrey, younger sister of Notre Dame star Michaela Mabrey, have gained their share of notoriety through the Exodus program. Mabrey had the opportunity to play for the U18 USA basketball team, and will be heading to Notre Dame next fall. The program has benefited girls like Lauren Hansen, who is only in the 8th grade and won’t graduate high school until 2019 but has already received offers from Division I collegiate programs. Exodus NYC continues to help young girls get to a level they may not have seen on their own, while keeping the dream of its founder ‘Apache’ Paschall alive. 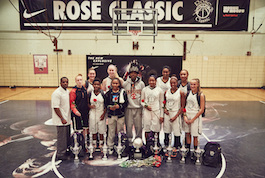