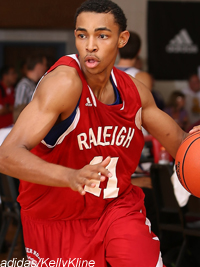 The National Prep Showcase has long been the unofficial jump-off to the high school basketball season. The best of the best in post-grad hoops descend to Albertus Magnus College in New Haven, CT, for an event that often has just as many college coaches as fans. Each year, players go from unknown to high-major, from unranked to the top-150. This year was no different.

There weren’t the top 10-ranked players who we’re used to seeing out of New England’s finest prep schools, but across the board, the talent was legit as ever. As always, director Adam Finkelstein brought all of the powers in his region. Games were incredibly competitive, new players emerged, and plenty of others burst onto the scene. At the National Prep Showcase, players were not only fighting for victories, but were also fighting for scholarship offers.

Here is a look at a few of the standouts at the 2013 National Prep Showcase:

Brewster went 2-0 on the weekend and was led by the stellar play of Georgetown recruit Isaac Copeland. The skilled, face-up 4-man shot it well from mid-range, threw down a number of nasty dunks in the paint, and even stepped out to hit a three-pointer. It’s truly hard to imagine that just a year and a half ago, Copeland was riding the pine for Ravenscroft out of Raleigh. Fast forward and this agile forward looks destined to fit the Hoyas’ system perfectly, a la Jeff Green.

Cekovsky was undoubtedly the hottest name of the Showcase. A skilled 7-footer, Cekovsky came over without a scholarship offer and left with the likes of Arizona and Louisville leaving offers on the table. He is a great passer from the high post, can shoot the ball out to the three-point line, and is incredibly fluid in the post. One mid-major college coach compared him to Dirk Nowitzki and while that’s a bit far fetched at this point, you could certainly see some similarities as far as style of play. Michal inked with Adriatic power Partizan early in his career, but has opted to go the college route before playing a pro game.

The nightcap of the National Prep Showcase left few in the gym, but the ones who stuck around got to see Kaleb Joseph ball out. Pouring in 37 points against Canarias, the future Syracuse lead guard brought out his full repertoire. He got to the line at will, was automatic from mid-range, and finished in the paint among the 7-foot trees. Tyler Ennis is having an outstanding freshman campaign, but Joseph showed that he will have no problem playing alongside him in the backcourt.

At most events, the best shooter usually isn’t the guy who is diving all over the floor like a maniac. At the National Prep Showcase, things were different. Falzon got things popping off on the opening night by shooting the lights out en route to 37 points, including 9 three-pointers. He also rebounded the hell out of the ball and helped lead an extremely well coached Northfield Mount Hermon team by example. NMH looks to defend its NEPSAC crown and if they hope to repeat, this legit junior will be essential.

If you stuck around for the nightcap on Saturday (there weren’t many), you knew who the top sophomore at the NPS was. Heron poured in 35 points and 10 rebounds, not only making it look easy, but doing it in an efficient manner. Playing all three perimeter positions, he used his size to see over the top of the D to drop dimes and seemingly finished everything around the cup.

A true back-to-the-basket center, the native of Norway drew a buzz in the States when he seemingly committed to Louisville out of nowhere. Well, they got a good one. The lefty is extremely coordinated for his size, is automatic with his jump hook going towards his right shoulder, and is athletic enough to dunk anything he gets in the paint. Matz is going to have to keep working to fit in with Louisville’s frenetic up and down pace, but talent wise, he’s ready to step on the floor and contribute at the high major level.

One of the hotter names on the circuit early this season was Donovan Mitchell, and he lived up to all of the hype at the NPS. The explosive athlete had some absurd Dwyane Wade-esque takes to the rack, played lockdown D, and got the crowd hyped with his aerial attack on the rim. The NYC product has offers from schools in just about every conference in the country, and will only continue to blow up more playing on the national level with Brewster.

One of Oakland’s finest headed to Florida to get his game and academics right, showing that he could go with the nation’s finest in New Haven. He straight took over games, both with his slashing and ability to bomb three pointers from deep. Clayton created his own shot on anyone, has great size for a wing, and put the clamps on whoever he guarded outside. Western Kentucky has always been known to grab a sleeper or two, and Derrick certainly fits the mold.

Players come to the NPS to get exposure and get scholarship offers; Shine did both. The lanky wing from Irving, Texas dropped 27 points on the opening night and then hit a three-pointer at the buzzer of regulation to send the game to OT on Day 2. A lights out shooter, Tavarius shot the ball well from deep, but also kept the D honest with his straight-line slash game. With offers from schools such as LIU-Brooklyn and James Madison at the moment, expect that list to grow as the season goes on.

There may not have been a guy in New Haven who did more to raise his stock in the eyes of college coaches than Jarvis Garrett. The Mil-town native shined, averaging 26 points, 6 boards, and 3.5 dimes over his two games at NPS. Garrett made nice reads off the pick and roll, showed off a nice pull-up, and created his own shot very well. Owning a plethora of mid-major offers, expect BCS schools to come calling after the NPS.

A gritty guard from north of the border, Danny Levitt showed out at the NPS. His tough D, crazy hustle, and strong takes to the rim made him a valuable asset for New Hampton off of the bench. In fact, Levitt threw down the dunk of the day on Saturday, flying down the lane to bang on two much taller defenders (who will go unnamed). Still early in the process, look for Danny to wind up at a solid DI program by the time it is all said and done.