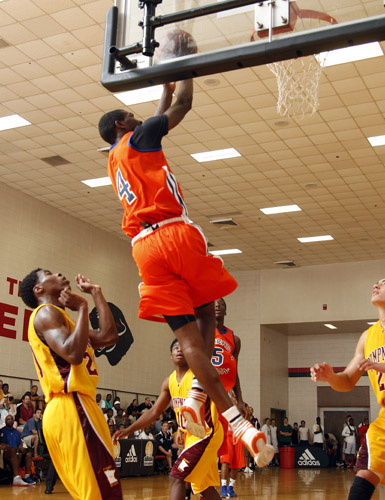 The unlimited shooting range, silky-smooth fluidity, next-level scoring ability—whether he’s relentlessly attacking the basket, pulling up on a dime or navigating his way through the lane—we’ve seen it before.

“I’ve learned a lot from my older brothers,” says the 6-5, 185-pound senior at St. John Bosco (CA) High School. “They taught me how to constantly put pressure on the defense, and they’ve mentored me through every step. From battling in the backyard to playing in pick-up games with NBA players, there’s no question they’ve helped develop and influence my game more than anyone else.”

The second youngest of four, Isaac’s basketball roots are as fertile as they come. His oldest brother, Gary Jr, played four years at the University of Miami before settling overseas. Older brother Jordan parlayed a standout career at the University of Texas into a first-round NBA Draft selection, and is entering his second season with the Denver Nuggets. With younger brother and John Bosco teammate Daniel (2014) marinating in the distance, the Hamilton’s have held down Southern California’s hoops scene for over a decade.

Considering all the history, past success and expectations placed on him, it’s not hard to imagine someone in Isaac’s situation having an inflated ego and false sense of entitlement. But for Isaac, who is deep-rooted in his Christian faith and hungrier than ever to shed any labels and create his own shadow, that’s not even close to the reality.

Isaac is even-keeled and speaks with a calculated maturity for his age. Through countless telephone conversations, his humility, willingness to work, and passion for the game stood out most.

He has an aggressive scoring approach reminiscent of Jordan, but unlike his brothers, Isaac is a point guard, one who impacts the game in several ways. His exceptional size for the position and precocious understanding of the game’s Xs and Os separate him from his peers. On offense, Hamilton makes shrewd decisions in the blink of an eye—knowing how to maximize pick-and-rolls, delivering no-look passes and setting up teammates in spaces they didn’t think existed—and on defense he’s versatile enough to defend three positions. In the lab since birth, Isaac has a polished all-around skill set to compliment an ahead-of-his-time experience hardly ever found at the high school level.

SLAM recently caught up with Isaac to discuss his transition from shooting guard to point guard, competing against NBA players as a high schooler, his college recruitment, esteemed basketball lineage and more.

Isaac Hamilton: Hey man, everything’s going great. Just staying in the gym and getting ready for the upcoming season, and also studying for my ACT exam.

SLAM: Nice. What aspects of your game have you been working on?

IH: Right now, I’m really concentrating on lifting weights and getting stronger. I’m in the weight room every other day. I need to get stronger before the season starts, because during the season everything is so hectic that there’s not going to be much time. I need to get my weight up so I can play in college. But I’m also in the gym working on my game every day, before and after lifting weights.

IH: Real good. We’re all playing with each other a few times a week, and my brother Daniel and I play together almost every day. Last year was a transition year for us in a lot of ways. We were a little undersized—Daniel, who is 6-6, was the tallest player on the team. And I was the second tallest player. Last year, I also changed my position from shooting guard to point guard, so I had a little transition period but now I’m ready to go.

We’re probably going to have a three-guard lineup this year, but we’ve added a few bigs that will give us a presence down low.

SLAM: What was the biggest challenge for you, sliding over from shooting guard to point guard?

IH: The toughest thing for me was probably getting more vocal. I’m normally a quiet guy, not too talkative, so in the beginning it was tough to lead the offense. But now I have no problem with that, because I realized that’s a point guard’s job. I also had some difficulty with recognizing that the point guard is responsible for all five guys on the team, and knowing where everyone is supposed to be at any given moment. So I’m trying to learn everyone’s assignments on all the plays.

SLAM: How would you describe yourself as a player?

IH: I’m a big guard who makes plays with the ball. I like to post up smaller guards, and I have a real good in-between/mid-range game, and love to pull-up from a step inside the 3-point line. I really do well in pick-and-roll situations, too. I’m kind of like a point guard version of Jamal Crawford, or like my brother Jordan.

SLAM: I assume playing the pick-and-roll is different as a point guard…

IH: Well, sort of. A few NBA players have told me that on the pick-and-roll, the first option should always be to attack the defense and score, regardless of what position you’re playing. If there’s no lane or opening for you to attack, then you read the defense and either pass to the cutting screener or drive and dish to the corner. So I don’t really play the pick-and-roll any differently now than I used to.

SLAM: What are you looking for in a school?

IH: I just want the opportunity to come in, compete, and play as a freshman. At the college level, I think the way you get better is by playing in games. So I’m just keeping my options open, and looking for the best fit.

SLAM: For sure. You took an official visit to Baylor last month. How’d that go?

IH: It was real fun. Just hanging out with the guys was a great experience. Everything over there is so modern and nice. I was surprised to be honest. Wako, Texas, could sound boring, but it’s real official. I’m Christian and so is my family, and Baylor is one of the top Baptist universities. My parents really liked that.

SLAM: How have the other schools impressed you?

IH: At UTEP, Tim Floyd has been close with my family for a long time. He recruited Jordan, and my uncle actually played for Don Haskins at UTEP on the 1966 “Glory Road” Championship team. I like his offense a lot, and I could see myself there.

Lorenzo Romar has a track record of success at Washington, and helps guys get better and take the next step, so that’s always intriguing. Me and Coach Romar have also developed a really strong relationship.

San Diego State is really intriguing, too. They’re close to home, are one of the top teams in the nation, and Coach Fisher is a legend. Him and his staff have really made me feel wanted. (Ed. Note: Isaac recently took his official visit SDSU. He said it was a positive experience and is excited to watch the team this year.)

And UNLV, they’re building a solid program, and I’m excited for my visit there, too. So right now, I’m just going to take my visits and then make a decision.

SLAM: In the summertime, do you ever get a chance to compete against NBA players?

IH: Yeah, when Jordan is home, all the time. I’ve played against guys like Jordan Crawford, Dorell Wright, my brother, Pooh Jeter, Nick Young. A few others, too.

SLAM: How are those experiences? Do you ever get nervous?

IH: In the beginning I definitely did, but now I just try to play my game and get better. When I play with guys who are in the NBA, I don’t try to do too much—I just take what they give me, and try to knock down open shots. Just playing with them is great for my game and confidence. If I’m guarding Nick Young one day, and then I’m playing against guys in my age group, there’s no comparison, so mentally it really helps me. Also, when I play against NBA guys and then come play against high schoolers, the high school game is so much slower to me than it was before, which has really helped my game.

SLAM: What is the biggest strength in your game?

IH: I can score in many ways and I constantly try to put pressure on the defense. I’m also patient, which I think is a big strength to my game. If something is not there, I won’t force it. Sometimes I’ll swing the ball to make the defense loosen up, then just reverse the ball back to me and try to attack again.

IH: I need to get stronger. And if I stay in the weight room that should happen. Also, I’m not an athletic freak, so I’m trying to become a smarter player and point guard. I’m trying to work on getting my teammates going first, and then getting my own later. Kind of like a them-first, me-second approach.

SLAM: What are your goals for this upcoming year?

IH: My goal is to win the CIS (California Interscholastic Federation) Championship, then try to qualify for a State Championship and win that as well.

SLAM: Who is your favorite NBA player?

IH: Kobe Bryant! I grew up on Kobe, and I really like his game a lot. I’ve met him once—that was real cool for me… I also like Jamal Crawford a lot. Those types of players—smooth handle, good scorers, killer crossovers—are the guys I like to watch.

SLAM: What’s it like being Jordan’s younger brother? Do you feel any extra pressure?

IH: I don’t see it as pressure; I see it as motivation. It makes me work harder so I can do the same things for my little brother. Like, just buying simple things and making his day, like Jordan does for us all the time. And then also playing against him—I wanna play against Jordan on the next level.

SLAM: Do you still get a chance to lace up against him?

IH: When Jordan comes out to California in the offseason, he stays over the house sometimes and we always play against each other. My family is real competitive, so yeah, we’re always going at each other. Sometimes we play a friendly game of one-on-one, other times all of us play four-on-four and it gets intense. Because we all hate to lose. Whoever loses is usually mad for the rest of the day, and it’s just not a good look.

SLAM: You ever win?

IH: [Laughs] Sometimes I win, but when Jordan starts going hard, he’s real tough to stop. My older brother Gary can back Jordan down because he’s bigger than him, so sometimes he beats him. But damn, Jordan doesn’t miss on our hoop. I’ll get him one day, though. You can bet that.

For more on Isaac Hamilton, check out SLAM 162, currently on newsstands.